Many Threads on industrial screws and fasteners stocked at Challenge Europe 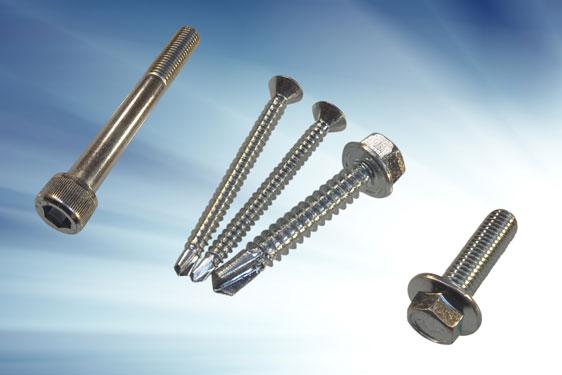 Thread forms for industrial screws and fasteners at Challenge Europe

Metric thread forms are common across a significant range of fastener products, so that for example an M5 thread is the same irrespective of the head type or screw style. There are of course fine thread, extra fine thread and constant pitch series, but if possible these are to be avoided as their stocked range is not as comprehensive as it is for your more general coarse pitch threads.

Challenge (Europe) Ltd M.D. Kevin Moorcroft explained that “the coarse pitch series of threads will meet most general engineering requirements so these are the standard production and ex-stock items. The more specialist threads such as an M10 fine pitch socket head cap screw, may be stocked by specialists such as ourselves here at Challenge Europe but of course the finer pitch thread forms can come at a premium price simply by reason of economies of supply”.

“Similarly for ‘old’ imperial threads such as the B.A. range, once commonly used within electrical equipment, which has seen its availability diminish during the last recession leading to enforced redundancy in many applications. Although demand still exists for the range, only those sizes/types with viable volumes tend to be stocked and available at reasonable pricing. Sizes not commonly stocked can be small batch produced but again at the risk of premium pricing.”

Other thread forms are slightly different – for example self-tapping screws which have a coarser pitch – and were conventionally used in sheet metal work with variants later developed specifically for use in plastics, the latter becoming more commonly known as thread forming screws. Thread forming screws also exist for use in metals and create a finer machine screw type thread by material deformation during insertion, the theory being that a thread forming screw could be removed if required and replaced with a machine screw. Thread cutting screws also exist having a lead in design feature that specifically aids the cutting/removal of material in a similar way to a thread tap.

Thread forming and cutting screws tend to be smaller sizes typically M2 up to M8 – possibly M10 depending on the drive – since security of the drive determines the amount of torque that can be transferred to the screw.

Specials, e.g. self-drilling screws, are another variant available in a several drill point and thread configurations suitable for use in a diverse range of applications and industries.

Further information on Challenge Europe products can be found on their website – www.challenge-europe.co.uk.

Challenge (Europe) Ltd is an ISO9001 stockist and distributor of threaded fasteners, with an emphasis on supplying manufacturing companies located within the UK with specialist standard or custom components.

Challenge operates Project Manufacturing Partnerships for sub-contract manufacture, sub-assembly and logistic supply. These have developed over many years from simple kitting processes to cover supply chain management including co-operative product development, tooling control and global sourcing through to stock monitoring.

07-08-2020 | Industry, Real Estate & Constr …
Challenge (Europe) Ltd
Challenge Europe – wire thread inserts for high-strength threads in soft mater …
Specialist threaded fasteners often need help in forming the best attachment to soft core materials such as aluminium or magnesium alloys. Challenge Europe are pleased to announce their stock, advice and production service operation for a comprehensive range of wire thread inserts, available in both tanged and tangless variants, or screw thread inserts which provide high performance internal threads in castings where light weight of the complete assembly is a
07-22-2019 | Industry, Real Estate & Constr …
Challenge (Europe) Ltd
Action Can from Challenge Europe for manufacturers and installers
As specialists in the world of industrial threaded fasteners, the team at Challenge Europe are pleased to announce stocking of the Action Can range of industrial aerosols. Explains M.D. Kevin Moorcroft “we deal every day with manufacturers, installers and service engineers who are in constant need of high quality consumables and we find the Action Can range meets the exacting requirements of professional engineers for anti-corrosion products and paints, cleaners, lubricants,
06-26-2019 | Business, Economy, Finances, B …
Challenge (Europe) Ltd
Challenge Europe address urgent need for “O” rings
The team at Challenge Europe have found that alongside their core threaded fastener range, there is a demand for sealing “O” rings on an urgent basis – and consequently decided to enhance stock levels to meet the need. Common requirements for “O” rings come in Nitrile (NBR), EPDM, Viton®, Silicone, Polyurethane and Neoprene with many others also called for to suit the needs of practically every industrial sector. Challenge Europe can support
06-07-2019 | Industry, Real Estate & Constr …
Challenge (Europe) Ltd
Challenge Europe offer thread locking devices, ex-stock
Challenge Europe are pleased to offer ex-stock thread locking solutions for general industrial assembly purposes. One of the most common and simplest solution to problems of vibration loosening of threaded fasteners is by use of a conventional locking nut or half nut. Use of a full nut provides an easy fitment which pulls from the same stock as the main fastener. A locking half nut above the full nut leaves “head