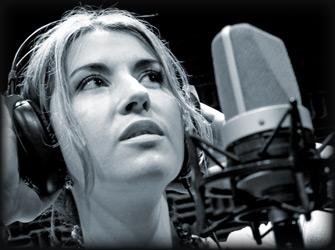 Bulgaria keeps its reputation upheld as an attractive destination for Hollywood productions. Not only that the country successfully draws the attention of the US film producers, but also it gradually gets into the sight of the global American Media corporations. However, instead of looking for shooting terrains they are interested primarily in researching possibilities for effective partnerships in the field of post-production services. “Warner Bros” is another company, which has turned to a Bulgarian provider for the needs of a TV project. It built a friendly cooperation, hiring the sound-recording studio “Graffitti” for voiceover work over the popular horror “Moonlight” TV series released on the private channel CBS. The Hollywood actress Heather Stephens, who is taking part in the horror movie in Sofia, was specially invited to do the dubbing session. She is famous for her roles in TV serials as “Baywatch”, “Desperate housewives”, “CSI: Miami”, and “Without a trace”. “The session was extremely hard to be accomplished technically and in my opinion something like this has never been done in Bulgaria before. On one side, our client ordered a permanent ISDN transmission, while the recording was running, so that he was able to monitor the time code of the tape in real time. Along with that we should broadcast a high-quality audio and video signal to a studio based in LA, which was recording the session at the same time. I think that no other Balkan studio is capable of dealing with such kind of a project”, admits the “Graffitti Studio” sound-engineer Cvetan Chobanov after the session was over.-Graffitti Studio LLC -6 Haidushka Polyana Str, 1612 Sofia, Bulgaria Ph: +35924011075Audio & Video full production studio: · media consulting, advertising and strategic media planning · professional analog and digital multi track audio recording · audio post production and mastering services · TV commercial and Radio jingle production · professional camera work · voice over services in over 30 languages for movies, commercials, video games and cartoons · music composing for movies, commercials and performances · voice menus for IVR and GPS navigation · audio books, narration, podcast, documentary, lip synchronization · corporate and business video presentation development, video tours, video tutorials · educational videos and e-learning · web audio and video media · subtitles in over 30 languages · 3D animation and cartoon production · video montage · audio and video effects · creative аudio and video banners for website promotion · foley effects for movies · TV, movie and cartoon sound · real time ISDN production monitoring

05-20-2008 | Advertising, Media Consulting, …
Graffitti Studio LLC-Sofia
The “The X Files” team and “Graffitti Studio”- Bulgaria unite efforts ov …
Greg Roach, director of the world famous TV serial “The X Files” and Mark Snow, composer of the series’ music, took part in the making of the Bulgarian movie “The Hamlet Adventure” with the cooperation of their Bulgarian associate director Ivaylo Dikanski. Heading the team of the international co-production, they accepted the challenge to climb up and shoot at 2600 m above the sea level in the mountains of Rila.

03-05-2021 | Advertising, Media Consulting, …
Ken Research Pvt Ltd
Bulgaria Agriculture Market, Bulgaria Agriculture Industry, Bulgaria Agriculture …
Agriculture sector plays a crucial role in the Bulgarian economy. Agriculture includes hunting, forestry, and fishing, as well as cultivation of crops and livestock production. The agriculture sector has the potential to be a vital source of foreign exchange earnings and can also produce huge amount of quality food for domestic population. Most significant advantage of this sector is the presence of well-established food research & development institutions. Bulgaria enjoys tremendous
08-04-2017 | Science & Education
education
Study in Bulgaria In English
Over the most recent few years Bulgaria is consistently turning into an interesting area for youthful daring voyagers, Europeans anxious to migrate to a tranquil and inviting state with safeguarded nature, wonderful ocean, captivating mountains and to wrap things up amazingly moderate average cost for basic items. It is stunning how Bulgaria, the most established state in Europe, has figured out how to keep its name and domain for more than
06-08-2017 | Business, Economy, Finances, B …
ReportsWorldwide
Agrochemicals Market in Bulgaria
ReportsWorldwide has announced the addition of a new report title Bulgaria: Agrochemicals: Market Intelligence (2016-2021) to its growing collection of premium market research reports. The report “Bulgaria: Agrochemicals: Market Intelligence (2016-2021)” provides market intelligence on the different market segments, based on type, active ingredient, formulation, crop, and pest. Market size and forecast (2016-2021) has been provided in terms of both, value (000 USD) and volume (000 KG) in the report. A
01-29-2013 | Advertising, Media Consulting, …
Bulgaria PR Office
SEO Conference 2013 Bulgaria
On March 22, over 400 people are expected to arrive at the Inter Expo Center Sofia in Bulgaria for the SEO Conference 2013. As noted on the SEO Conference Bulgaria – official site, the event, which will take place from 9 a.m. to 7 p.m., is the country’s main conference that focuses on search engine optimization and marketing. It is also an outstanding meeting place for customers, optimizers and representatives
04-06-2009 | Industry, Real Estate & Constr …
PMR Publications
Construction market in Bulgaria 2009
The economic slowdown, a less substantial inflow of foreign capital, limitations on mortgage lending and a weaker economic climate among construction companies will cause the construction market in Bulgaria to start to decelerate in 2009. Civil engineering, which will continue to grow slightly in 2009, will not fully redress the decline in residential and non-residential construction. After impressive growth between 2005 and 2007, in H2 2008 the construction market in Bulgaria
04-11-2008 | Advertising, Media Consulting, …
CSA Bulgaria PR Office
CSA Bulgaria provides speakers for the Marketing Forum in Bulgaria
Sahar Hashemi and Jay Conrad Levinson will be among the key-note speakers at the Second Marketing Forum in Bulgaria, organized “Capital” business weekly. Both key-note speakers are provided by CSA Celebrity Speakers Bulgaria, who officially opened its Bulgaria office in Nov. 2007 Sofia, Bulgaria – Sahar Hashemi – co-founder of Coffee Republic and Jay Conrad Levinson - the father of Guerilla Marketing will both participate with keynote speeches at
Comments about openPR
I can't but agree to the positive statements about your portal: easy to use, clear layout, very good search function, and quick editing!
Jens O'Brien, Borgmeier Media Communication