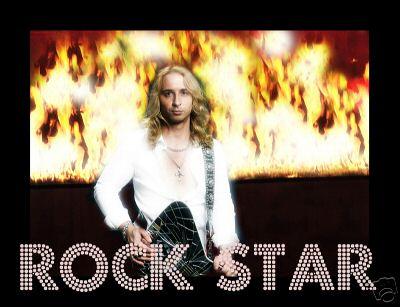 Rock Star, formerly known as Marc Kancler, has posted a chance to win 1% of his future earnings on Ebay. Rock claims that if he gets a chance to audition and win a part, small or large, and a successful acting career stems from that audition and the publicity produced by his ad, the winner will receive 1% of all his acting income from that day forward. Rock has been no stranger to publicity or the willingness to do anything to get noticed. He has recently changed his name to Rock Star and trademarked his own slogan “The one and only true Rock Star.” A few years ago he sold a strand of his hair on eBay for over $600 resulting in a ton of publicity. “I am an attention freak and workaholic” says Rock. Since moving to California he and his twin brother have started a band, starred in a potentially syndicated reality show, filed for a patent along with 7 different trademarks, pitched 3 television treatments to a high profile producer, launched a nonprofit venture, and finally, co-authored a book. Rocks website rockstarrockstar.com shows that he does in fact think he is a rock star. It also backs up his claim of being a workaholic. “My philosophy and approach is to be as productive and do as many things as I can.” Rock says. His drive and determination should be enough to get someone’s attention in Hollywood and potentially make the winning bidder a serious profit. RockStar RockStar 23852 PCH Suite 260 Malibu, CA 90265 If you'd like more information about this topic, or to schedule an interview with Rock Star, please call him at 424-644-5315 or e-mail him at rock@rockstarrockstar.com Rock Star Rock Star is home to Rock Star who is an aspiring actor, musician, author, inventor, and president of his own nonprofit.