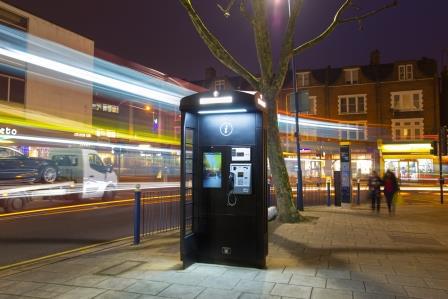 Following the recent 90-year anniversary of the K2 - the iconic red British phone box - appearing on our streets, New World Payphones are bringing it into the 21st century with high-tech makeover. This staple of British tradition has everything you would expect from a traditional phone box, plus a number of adaptions for 21st century use. This includes high-speed Wi-Fi connection provided by Virgin Media, touchscreen functions for local services and digital advertising screens. Beyond its practical usage, the phone boxes will also form the basis of a renovation in public infrastructure. For every new phone box built, New World Payphones will declutter the streets by removing older phone box models that have fallen into disrepair AND plant an urban tree via a partnership with Trees for Cities. The partnership provides the perfect fusion between technological and environmental enhancement on the high street. Despite being a phone box for the 21st century, the design is drenched in telecommunications heritage. All production is carried out in Britain by Lord Sugar's Amscreen company in Bolton and the design is inspired by the design ideas used by Sir Giles Gilbert Scott in creating his original K2 phone box. The K2 phone box was Sir Giles Gilbert Scott’s first vision for a phone box and arrived on London's streets in 1926, just over 90 years ago. While the traditional red phone boxes have always retained a degree of charm, more modern models – via ageing as well as vandalism – have become something of an eyesore on Britain's high streets. The revenue generated from the New World Payphones digital phone box will be used to carry out weekly maintenance –more than four times as frequently as existing phone boxes - thus countering the potential for urban decay. Meanwhile, these modern additions will help improve the UK's connectivity to broadband in urban areas. More mobile broadband spots, such as the one provided by New World Payphones, essentially act as boosters for the UK's connectivity. Lord Sugar, Chairman at Amscreen, said: "Along with the likes of red buses, Piccadilly Circus and Big Ben, the inner-city phone box has been synonymous with Britain's cultural heritage since their introduction nearly one hundred years ago. It is therefore fitting that Amscreen – a British company – have been charged with manufacturing the remodelling of this classic design icon. "I view the UK manufacturing industry in the highest regard. It has always been the global standard bearer for quality and I'm proud to see Amscreen continue this tradition with a project of this scale. I am confident that our digital signage expertise, combined with the vision of ClearChannel/New World Payphones and the high grade technology provided by Virgin, has helped create a new entry into our national phone box collection and one that could become as iconic as the famous K2 design." Professor Nigel Linge of the University of Salford's telecommunication programme said:"It's often said that mobile phones have caused the death of the public phone box, I would argue that this new model proves that mobiles have actually prompted the evolution of the phone box. "Our communication needs are always evolving. This model meets the demand for enabling modern communication, while keeping one foot in the past with a design steeped in history. It is a technological and aesthetically-pleasing success and will ensure that phone boxes will retain their ubiquitous presence on our high streets for years to come." Justin Cochrane, CEO of Clear Channel UK, the owner of New World Payphones added: "We're delighted to be officially launching our phone box for the 21st century. These new phone boxes provide a host of benefits to the public including telephone, Wi-Fi and local area information. This launch will also see us declutter high streets and plant hundreds of trees in urban areas while providing a timely boost for British manufacturing, The public phone box sits alongside Big Ben, cups of tea and Tower Bridge when you think of institutional British icons, so to be involved in the evolution of such a stalwart of the British high street is an honour.”Amscreen are specialists in delivering connected advertising displays across Europe. With a network of 10,000 screens and more than 20 years’ experience in providing screen solutions, Amscreen are an established global leader in the sector. The current partner portfolio includes blue chip retail businesses such as BP, Shell, Tesco and Costa Coffee as well as Clear Channel. The latest deployment with Clear Channel UK included the 500 Adshel Live London network, the UK first large scale smart city screen network to be deployed in Europe.Amscreen, Amscreen House, Paragon Business Park, Chorley New Road, Horwich, Bolton, Lancashire, BL6 6HG

04-12-2021 | Advertising, Media Consulting, …
Fupping Media
Promoting British Business and British Startups With BestStartup.co.uk
BestStartup.co.uk has taken on the necessary and enjoyable task of promoting innovative startups and British business achievements this year. The business successes of last year were hard-won and did not garner the attention that they deserved. Businesses in the UK have faced double-pronged difficulties in recent months, both from a worldwide pandemic and due to changing tax laws. Despite the challenges of 2020, British business has risen from the ashes to
01-27-2021 | Business, Economy, Finances, B …
Copely Developments
British Gardeners Vote with their Feet and Buy British
UK consumers are becoming more conscious of what they are buying after the emergence of Covid. A survey commissioned by Made in Britain reveals strong evidence that consumers are more likely to buy British to support the economy. • 90% of Britons felt it was important to buy British products generally • Two-fifths prefer to buy British irrespective of cost • Seven in 10 people believe that buying British can help tackle climate change Copely Developments,
04-30-2014 | Industry, Real Estate & Constr …
Aeon Lighting Technology Inc.
LED Lighting for British Royalty
(April 28, 2014 – Taipei) When it comes to quality and safety, ALT puts priority over the two above all else. Therefore it comes as no surprise that even the Queen of England opted for ALT’s products. About 1,100 pieces of ALTLED® Metis dimmable chandeliers in warm white are installed in a Grade 1 Listed building in Central London next to Buckingham Palace, Lancaster House. Lancaster House was used during
12-14-2011 | Leisure, Entertainment, Miscel …
Brave Soul
Brave Soul Set to Revitalise British Clothing
Brave Soul Set to Revitalise British Clothing Following a difficult year for British fashion, the launch of Brave Soul, a new clothing brand serving both men and women, has promised to kick-start a stuttering industry. When Britain's fascination with fast fashion faltered in the spring of 2011, several leading high-street retailers posted substantially reduced profits. The chief driver of the demise was identified as the recession, which had caused most firms in
04-28-2011 | Business, Economy, Finances, B …
Learning RP British Accent
British Accent Webinar Dates Announced
A week long programme of webinars announced about a new British Accent training resource called The Ultimate RP British Accent Learning Resource. Bristol, UK, April 28, 2011 -- RP British Accents students can now register to join a webinar to find out more information about the release of a brand new British accent training product. “The Ultimate British Accent Learning Resource” has been created by Alison Pitman from LearningBritishAccent.com and
12-13-2010 | Tourism, Cars, Traffic
Twitbed
escaping British winter last Minute!
Christmas 2010 is approaching – the number one time of celebration of the year, if only the weather were not so cold and rainy. How different is Alicante in Spain, where the weather is still mild and sunny, perfect for escaping the snow and traffic chaos. The Twitbed network for private holiday rentals offers an even better value for travelers staying at Twitbed in Alicante: Subscribers of the free newsletter get twice as much holiday
Comments about openPR
We publish our press releases on openPR.de because we like people who are "open" - just like us.
Frank Obels, CEO, INCONET - Informationssysteme, Communication und Netzwerkberatung GmbH