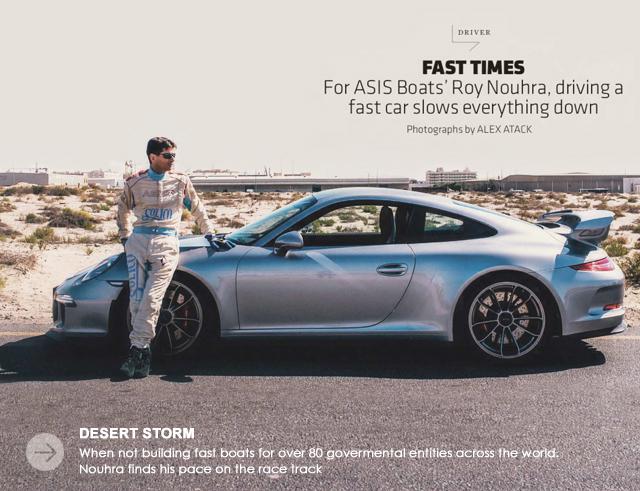 Article below as featured in Inc. Arabia December 2016 Edition. (Pages: 4, 12, 13 & 14).ROY NOUHRA’s love for racing started early. He was 16 when he got his first car, and when he first got into trouble. His father had indulged him, buying him a sports car. And as 16-year-olds do when handed a ‘toy’ that can go fast, Nouhra burnt a few roads (and a few laws) to go with it.“I loved the feeling of going fast. But I needed to do it in a controlled environment. So…I started going to the race track.” But race tracks are expensive, especially for a 16-year-old. He did the next best thing and got himself a job as a race track trainer.”This was the worst part. I hated being a passenger in a fast car. But it was the only way.”Eventually, the 16-year-old grew up, and moved to Dubai in 1997, where he took his love for all things fast, and his background in engineering to expand the family’s manufacturing business to build high- performance inflatable boats - ASIS Boats.”When I joined my father’s business, I wanted to make race cars. But it is a hard market to break. So we decided to go for the next best thing.” ASIS Boats, now into its tenth year, sells its products to over 80 governmental entities across the world. But not even fast boats beat the satisfaction Nouhra gets from fast cars. “When you are racing, you are in the moment…you are in the right now. It’s like a form of meditation.”Heading the family business which employs over 1,100 people is no easy feat and keeps his schedule full. But, Nouhra tries to race at least once a month either at Dubai Autodrome or the Formula One track on Yas Island, Abu Dhabi. Despite the short period of the activity, the impact lingers for days. “After I leave the race track…everything is so slow. It takes me a week to adapt to the pace of everyone else. It kind of pushes everyone around me to be faster at work.”Nouhra feels, though, that he could and should do it more often.“The Dubai life is a fast-track life and entrepreneurs need to strike a balance between business, family, the community, and the “me” and that’s what I try to do by racing.-HANA EL MOURADASIS Boats is the world leader in providing advanced maritime solutions in Structural composites and marine grade Aluminum Rigid Hull Inflatable Boats and Vessels.ASIS Boats P.O.Box 61426 Dubai UAE Tel: +971 4 880 4441 Fax: +971 4 880 1771 Email: info@asisboats.com Website: http://asisboats.com/

You can edit or delete your press release FAST TIMES, For ASIS Boats’ Roy Nouhra, driving a fast car slows everything down. here

09-08-2021 | Industry, Real Estate & Constr …
ASIS Boats
An ASIS Boat For Coastal Fisheries
Two New ASIS Builds to Aid the Coastal Fishery Division of the MIMRA Coastal fisheries are becoming increasingly important in the Marshall Islands. Most of the Marshall islands land is a few meters above sea level and soils are generally poor. Hence coastal fisheries are very important for subsistence purpose and for income generation. Fisheries are regulated, promoted and managed by the Marshall Islands Marine Resources Authority (MIMRA) that has placed an
07-05-2021 | Industry, Real Estate & Constr …
ASIS Boats
Latest delivery News from ASIS Boats
ASIS Boats has just completed the production of two 8m Patrol Boats for a private company that provides construction and vital services in the Oil and Gas sector in West Africa. These RHIBs are designed to ensure the safety of the State’s internal waterways by regulating, establishing and maintaining them. Each RHIB is featuring our patented fiberglass air-hull, an aluminum open wheel house, a military grey Neoprene hypalon 1670 Dtex collar filled
03-08-2021 | Industry, Real Estate & Constr …
ASIS Boats
Why Dibba Bay chose an ASIS RIB for their oyster harvest.
Having the right boat for Oyster Farming is crucial for proper harvesting. To be able to go out in any kind of sea condition regardless of the weather is a must. Ramie Murray founder of Dibba Bay Oysters; Middle East’s first shellfish farm producing gourmet oysters says: “Having an ASIS RHIB as part of our fleet has been life changing. No matter the sea condition or the tidal levels we can
01-18-2021 | Industry, Real Estate & Constr …
ASIS Boats
Delivery of an ASIS Boats to a Marina in Dubai
The ASIS Marina Operations RIB Boat comes with a unique flat foam push bow and bow pull post, making it the preferred support boat for Marinas. Getting off to a good start of the year, we delivered last week an 8m custom-built RIB Boat to a Marina in Dubai to complete their already existing fleet of 2 ASIS Boats. This 8 meter ASIS Marina Operations RHIB is equipped with the stainless bow