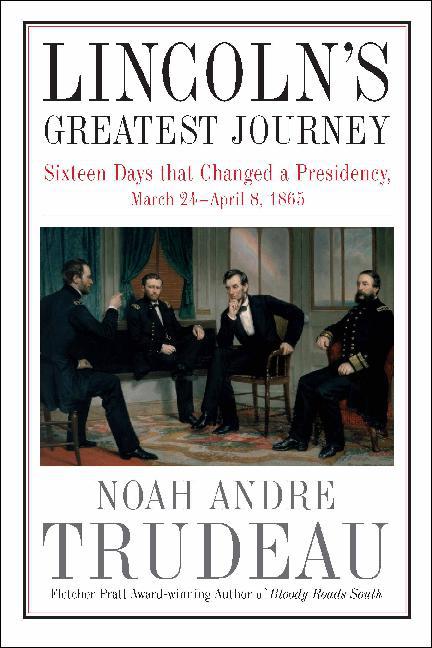 EL DORADO HILLS, CA: February 1, 2017 - Historian and author Noah Andre Trudeau has recently been selected to receive the prestigious 2016 Award of Achievement from the Lincoln Group of New York for his new book Lincoln’s Greatest Journey: Sixteen Days that Changed a Presidency, March 24 – April 8, 1865. The award committee’s vote was unanimous, according to the Lincoln Group’s president Steven R. Koppelman. “The Award is presented annually to the individual or organization that has done the most to encourage the study and appreciation of Abraham Lincoln,” explained Koppelman. “In making this award, The Lincoln Group of New York recognizes Lincoln’s Greatest Journey as a superb work of research, expertly written, which details an aspect of the Lincoln presidency that has been little studied and a much needed in-depth work.” He went on to state that prior award winners include Doris Kearns Goodwin, Eric Foner, Harold Holzer, and screenwriter Tony Kushner.“It is a wonderful and humbling honor to receive this prestigious Award of Achievement for Lincoln’s Greatest Journey,” said Trudeau. “It is a special feeling to read the list of past winners along with the memorable books they wrote and to realize my effort is now counted among them. My thanks to the members of the Lincoln Group of New York for making this selection.”“This is a special study, with keen insights and deep research, so having Noah Andre Trudeau win such a prestigious award is very gratifying,” explained Managing Director Theodore P. Savas. “Noah been working studying this phase of Lincoln’s unique life for a long while and in many ways, and I am especially pleased his work has been recognized in this manner.”About the Book: The most extensively researched and detailed story of these decisive sixteen days at City Point, Lincoln’s Greatest Journey provides a narrative laden with many heretofore unpublished accounts. A fresh, more complete picture of Lincoln emerges. This is Lincoln at a time of great personal and national change—the story of how he made peace with the past and became firmly future-focused, all set against a dramatically new narrative of what really happened during those last weeks of his life. It infuses the well-worn Lincoln narrative with fresh sources to fundamentally change an often-told story in ways large and small.About the Author: Noah Andre Trudeau is a history graduate of the State University of New York at Albany. His first book, Bloody Roads South, won the Civil War Round Table of New York’s prestigious Fletcher Pratt Award, and enjoyed a cameo appearance in the hit web television series House of Cards. His fourth book, Like Men of War, a combat history of black troops in the Civil War, was honored with the Grady McWhiney Research Foundation’s Jerry Coffey Memorial Book Prize. His other books include a best-selling history of the Battle of Gettysburg, Sherman's “March to the Sea,” and a compact biography of Robert E. Lee.About Savas Beatie LLC: Savas Beatie LLC is a leading military and general history publishing company with distribution worldwide. Read more about Lincoln’s Greatest Journey, and all of their books at http://tinyurl.com/zslfghw.Savas Beatie LLC 989 Governor Drive, Ste 102 El Dorado Hills, CA 95762Contact: Renee Morehouse, Savas Beatie LLC Email: renee@savasbeatie.com Phone: 916-941-6896, Fax: 916-941-6895

05-02-2019 | Leisure, Entertainment, Miscel …
Savas Beatie LLC
Savas Beatie Announces Emerging Civil War Audio Series
Savas Beatie is pleased to announce the release of the Emerging Civil War Audio Series. The Emerging Civil War series of books published by Savas Beatie offers compelling and easy-to-read overviews of some of the Civil War’s most important battles and issues. By branching out to the audio world, Savas Beatie will be able to reach an even larger audience. “We’re really pleased to be bringing such a great book
09-25-2017 | Politics, Law & Society
Savas Beatie LLC
New Book Examines the CIA’s Role in Achieving Victory in the Days Following 9/ …
Savas Beatie recently announced the release of Foxtrot in Kandahar: A Memoir of a CIA Officer in Afghanistan at the Inception of America’s Longest War by Duane Evans, which gives an insider’s look at the CIA’s daring campaign against al-Qaeda after 9/11, in the center of the Taliban’s heartland. Kandahar. An ancient desert crossroads, and as of fall of 2001, ground zero for the Taliban and al-Qa’ida in southern Afghanistan. In
08-01-2017 | Arts & Culture
Savas Beatie LLC
New Book Examines A Treasured Document – The Declaration of Independence
Savas Beatie recently announced the release of The Ultimate Guide to the Declaration of Independence, by authors David Hirsch and Dan Van Haften, which explains how a six-element structure helped Jefferson organize and compose the Declaration. Drafted by Thomas Jefferson, the logical force of the Declaration facilitated the survival of a nation. The Ultimate Guide to the Declaration of Independence explains the document more thoroughly than any book previously published. With
07-31-2017 | Arts & Culture
Savas Beatie LLC
New Book Explores Dramatic and Storied Chapters at Lookout Mountain
Savas Beatie recently announced the release of the latest in their popular Emerging Civil War series, Battle Above the Clouds: Lifting the Siege of Chattanooga and the Battle of Lookout Mountain, October 16 - November 24, 1863, by author David A. Powell, which looks at the beginning of the struggle for Chattanooga through the iconic Battle of Lookout Mountain. In October 1863, the Union Army of the Cumberland was besieged in