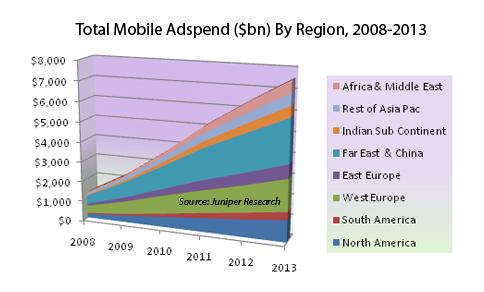 08-14-2009 | Media & Telecommunications
Juniper Research Limited
Low-Cost Handsets to Account for over Half of all Mobile phones by 2014, as Cons …
Hampshire, UK: Tuesday, 11th August 2009 – New research has shown how the mobile handset market is becoming increasingly polarised between low cost handsets for emerging markets and high-end smartphones for developed regions – with the mid-range handset market being squeezed. Low-cost handsets and Smartphones will together account for almost 79% of all new mobile phones by 2014, or just over 1 billion units in all. Operators and vendors are preparing
03-18-2008 | Media & Telecommunications
Juniper Research Limited
New Study from Juniper Research Forecasts Mobile Search Revenues to Reach $4.8 b …
HAMPSHIRE, UK: 18th March 2008 -- Annual revenues generated by mobile search services are expected to reach $4.8bn by 2013, according to a new report from Juniper Research, but Cautions Against ‘Advertising Overload’ and Personal Data Security concerns. The report says that while revenue generated by data charges associated with mobile search is significantly higher than that generated by mobile advertising at the present time, the gap will close over the
02-06-2008 | Media & Telecommunications
Juniper Research Limited
3 Italia win Gold at this years Future Mobile Awards
HAMPSHIRE, UK February 6th, 2008 – Mobile TV innovators, 3 ITALIA, have been selected by Juniper Research as the top award winner in the mobile TV category at this years, Future Mobile awards. The Future Mobile Awards are given to companies that we believe have made significant progress within their sector during the previous year, and are now poised to make considerable market impact in the future. The gold award
01-23-2008 | Media & Telecommunications
Juniper Research Limited
Mobile Entertainment Service Market to Increase threefold to $64bn by 2012
HAMPSHIRE, UK: 23rd January, 2007 - Music, games and mobile TV will be the major contributors to the global mobile entertainment market which will rise from just over $20 billion in 2007 to more than $64 billion by 2012, according to a new report by Juniper Research. Other mobile entertainment sectors include User-generated Content, Gambling, Adult and Infotainment. The report says that mobile music will remain the largest single sector