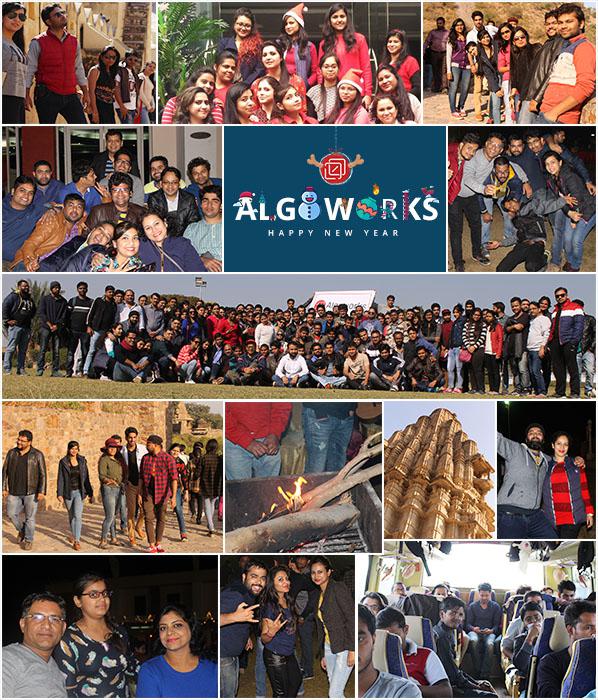 Algoworks celebrated December for Christmas and New Year in a continuous festive mood that never seemed to end. The year-end celebrations included magnanimous participation in the Algoworks Cricket Tournament 2017 as well as celebrating the company’s ten successful years in the same month. The office was decorated all red and white, and happy. There were banners and balloons all around, and an aura of crisp winter was created. Buntings decorated with “Merry Xmas” beautified the reception. The air was filled with the melody of Christmas Carol that was sung by a bunch of employees. Santa visited, spreading glee with his “Ho ho ho”, and distributing candies to everyone. Employees dressed up in red and donned Santa hats for the photo clicking session. Little Christmas trees added to the festive spirit. Mr. Ajeet Singh, co-founder of Algoworks, bestowed his merry wishes and greeted new year wholeheartedly with a warm speech, “Another year ends, a successful one, indeed, that will open gates to new possibilities and the scope to grow further. A Merry Christmas and a very Happy New Year to one and all.” The annual trip was organized as well, where the team traveled to Kotputli, I deserted town near Jaipur the capital city of Rajasthan. It was said to be a memorable trip for everyone. The stay was at a luxurious ‘haveli’ (resort) which was covered in lush greenery amidst the desert. A local tour to the haunted Bhangarh fort and Jaipur city was also arranged. Upon returning back to the resort, the festivity began, where everybody partied nonstop for the whole night. Later in the evening, the bonfire lit the ambiance and warmed away the chilly winter air. People sang along happy songs, shaking their legs and rejoicing a decade of success of the company, and in anticipation of the new year to come.About Algoworks: Algoworks operates chiefly in the United States from their California Office besides having a good hold on the European and Asian markets. Headquartered in India, the decade old B2B IT service firm has expertise in key areas of Mobility, Salesforce, Business Intelligence, and ECM including Software Product Engineering. For more information visit http://www.algoworks.com/Algoworks Solutions Inc. 355 W Olive Ave #204, Sunnyvale CA 94086

You can edit or delete your press release Ending 2016 On A Happy Note: Happy New Year! here

06-24-2021 | IT, New Media & Software
Algoworks
Algoworks Wins Globee® in the 16th Annual 2021 IT World Awards®
Algoworks announced today that The Globee® Awards, organizers of the world’s premier business awards programs and business ranking lists, has named Algoworks a winner in the 16th Annual 2021 IT World Awards®. These prestigious global awards recognize information technology and cybersecurity vendors with advanced, ground-breaking products, solutions, and services that are helping set the bar higher for others in all areas of technology and cybersecurity. “We are glad to be recognized
08-12-2020 | IT, New Media & Software
Algoworks
Algoworks Wins the Prestigious ComHQ’s Editor’s Choice Award in the Category …
Algoworks, a multinational B2B IT Services firm, has announced it has earned the esteemed honor “Top app development company 2020" award. In appreciation of India's leading private companies, COMHQ declared this, honoring those companies' Innovations, technologies, and culture across the sectors concerned. Ajeet Singh, Co-Founder and Director, Algoworks, thanks to the countless efforts and the expertise of incredibly diverse teams, continuously reaching out to consumers and making their views

12-03-2018 | Fashion, Lifestyle, Trends
Auckland Hypnotherapy
Christmas is Coming. 5 Tips to beat Christmas Stress
Christmas is painted to be a time when families come together under one roof for a period of celebration, good food, great conversation and a paper hat or two. However, in reality, what often occurs is that a group of people who happen to be related are trapped together for what seems like weeks in one house with little opportunity for relaxation and enjoyment. What also doesn’t help is that at
10-10-2018 | Fashion, Lifestyle, Trends
Garner Insights
Oil Christmas Tree for Deepwater Market Share, Trend, Segmentation, Vendor Lands …
Oil Christmas Tree for Deepwater Market Garner Insights announces the addition of its new research report titled, ‘Oil Christmas Tree for Deepwater market. Oil Christmas tree for deep water (>3000 feet) is an assembly of valves, spools, and fittings used for subsea wells. Installed on subsea wellhead, the tree is used to connect and support tubing string, seal off casing pipes and casing-tubing annulus, isolate borehole fluids from external sea water, control wellhead production
12-14-2017 | IT, New Media & Software
GamerKeyz
GamerKeyz Christmas
GamerKeyz just opened we buy game key codes in bulk so you pay less for the games you love. For Xmas we are offering buy one game get one free until Xmas day! For every game you buy you will receive a random Steam game key which will be delivered to your inbox on Xmas morning. We have 680 Steam games for sale now, we are about to add Origin
12-28-2010 | Fashion, Lifestyle, Trends
Phuket Ocean Villas Co. Ltd.
Christmas in Phuket
Phuket, Thailand: Thailand is a 95% Buddhist country so Christmas is not a festival that officially appears in the Thai calendar, but with a large ex-pat community and Thais who love an excuse to have fun, Christmas is celebrated in fine spirit every year - especially in Phuket. In fact, they started playing Christmas carols in Phuket’s Tesco on 19th November which took me by surprise. Then I noticed the frozen
12-22-2010 | Politics, Law & Society
Michael Prell
Merry Christmas
’Tis The Season To Celebrate The Annual Festive Tradition Of Refusing To Call Christmas “Christmas.” 68% of Americans say they prefer to be greeted with “Merry Christmas” and not “Happy Holidays” and yet each year the Anti-Christmas Brigade takes to the streets, and takes to the airwaves, to protest against Americans calling Christmas by its name. Why is that? Sometimes the best way to understand why people do what they do is to
11-24-2009 | Energy & Environment
TiSUN Gmbh
Last Christmas
The Tyrolean solar specialist keeps it Christmas promise. TiSUN has donated a solar system to the children at the Mordecai orphanage in Port Elizabeth (South Africa) and had it fully installed, free of charge. A project to improve health conditions for orphans who have lost their parents to AIDS has now been carried out. The system became operational in early September and provides hot water for two showers and a bathtub.
Comments about openPR
9 o'clock: discuss press release with client, 10 o'clock: submit release to openPR, within the briefest possible time release is published and displayed in a prominent place on openPR.de. I am thrilled!
Zehra Spindler, Calypso Now! - Communication Agency