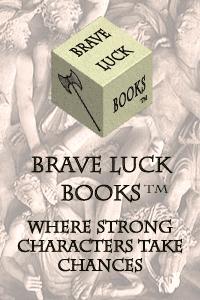 The first chapter effectively sets the tone for this fast-paced fantasy book driven by action, ambition, and magic.

Brave Luck Books (TM) the fantasy imprint of Falbe Publishing in Chico, California added its first podcast from the fantasy novel Union of Renegades on March 19th. The first chapter has been recorded in mp3 format, and subsequent chapters will be released at regular intervals. The author Tracy Falbe read Chapter 1 “In the Service of the Empire” for the podcast, and it introduces the main human male character from the story, Dreibrand Veta. He is shown to be a ruthless warrior and cunning military officer. His people, the Atrophane, have been conquering their known world, but now they have reached the edge of their map and a great unexplored wilderness bordered by high mountains presents itself to the conquerors. Dreibrand sees opportunity in the unknown lands where he dreams of carving out a new destiny because his family is currently in disgrace. But the newly conquered peoples at the edge of the known world warn him that death consumes all who enter the Wilderness. It is said to be a place where gods once made war and now their spirits guard it jealously from the living. The first chapter effectively sets the tone for this fast-paced fantasy book driven by action, ambition, and magic. The Midwest Book Review referred to this fantasy as “An exciting treat for fantasy buffs” and readers have praised the novel for its interesting use of magic and compelling characters. Union of Renegades is the first book in the complete four-book epic fantasy series The Rys Chronicles that sells worldwide in ebook and trade paperback. The first book is also available in its entirety as a free fantasy ebook in four popular formats. Undertaking the recording of this fantasy novel and granting free access to listeners was the next logical step toward making the fantasy genre fan base aware of the series. The popularity of audio books has been well established for a couple decades, and podcasting presents a perfect means of distributing audio books online. Listeners who enjoy fantasy books can easily bookmark the podcast page or subscribe to the RSS feed in order to be alerted to new chapters. Eventually the entire novel will be available in audio format online. Additional information about the fantasy book podcasts can be found at http://www.falbepublishing.com/braveluck/fantasy_book_podcasts.htmlTracy Falbe Falbe Publishing 2981 Cohasset Road Chico, California 95973 530-343-2441 tracy@falbepublishing.com http://www.braveluck.comBrave Luck Books (TM) is the fantasy fiction imprint from Falbe Publishing. Fantasy fiction enjoys a big market and big audience, but with this comes a plethora of titles and therefore competition. The imprint aims to stand out by honoring the traditions that make fantasy fiction so appealing while keeping story lines fresh. Located in Chico, California, the publishing company was started in 2004 to produce books written by Tracy Falbe. It is a small press that produces small print runs of trade paperbacks and ebooks for readers worldwide.