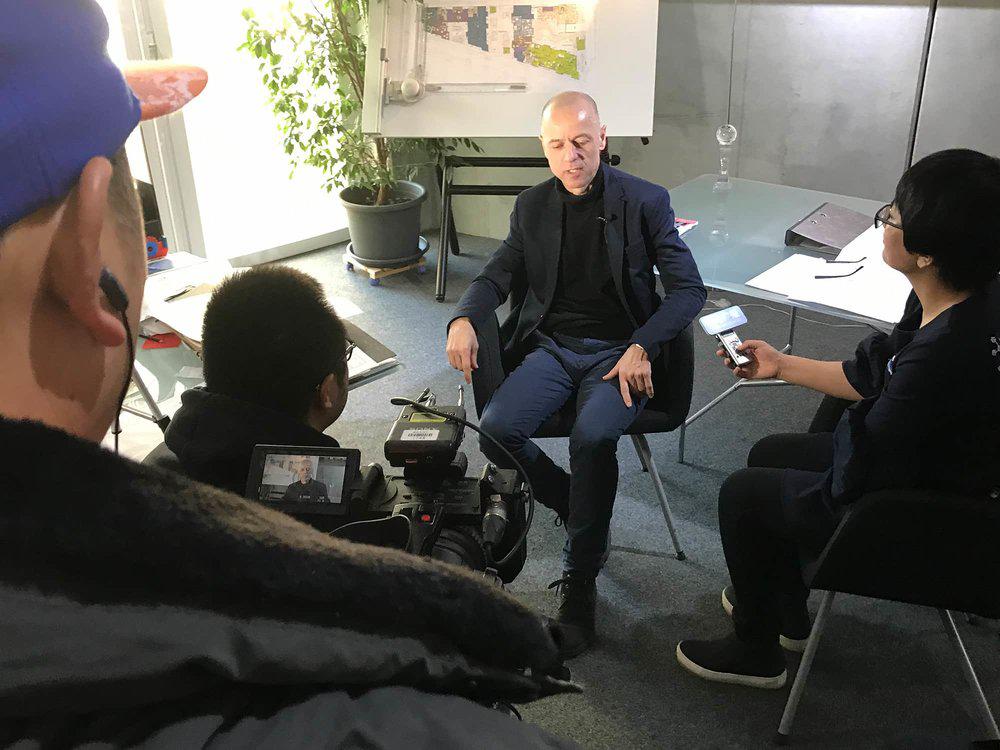 Because of his experience and approach toward sustainable construction and social responsibility, Wolfgang Frey is an in demand consultant in China. A Chinese camera team from Qingdao recently interviewed Wolfgang Frey in his architecture firm in Freiburg, Germany. They continued filming at the Heidelberg Village construction site in Bahnstadt, a global role model for green buildings and modern urban development.The journalists were also interested in learning more about the cooperation between Wolfgang Frey’s business group (Frey Group) and the Chinese partners at the Sino-German Eco-Park. The Sino-German Eco-Park in Qingdao is a flagship project that signifies Sino-German cooperation. In 2010 the Federal Ministry of Economics and Technology and the Chinese trade ministry signed the Memorandum of Understanding to set a signal for positive Sino-German cooperation in the presence of German Chancellor Angela Merkel and the then Chinese Prime Minister Wen Jiabao.In 2014 an agreement to develop Asia’s largest passive house project in the Sino-German Eco-Park was reached between German Chancellor Angela Merkel and the Chinese Minister President Li Keqiang. The Sino-German Eco-Park is one of the milestones for China’s path toward a sustainable future. It is the world’s largest project certified by the German Sustainable Building Council (DGNB e.V.) and will also house a so-called futuristic city by the Fraunhofer Institute. The project will thereby gain significance on the global political stage regarding environmental, social, economic and trade issues. A cooperation between the Sino-German United Group Co. Ltd. (Administrative Committee for the Sino-German Eco-Park), Qingdao Jianan Group Co. Ltd. (an experienced general contractor for urban and infrastructure development) and the Frey Group will be responsible for implementing sustainable urban development concepts in China. For the next ten years, the project partners will be responsible for planning, managing and investing in the Sino-German Eco-Park. Wolfgang Frey along with the Frey Group will also continue to consult on further sustainable large-scale projects.For further information about Heidelberg Village – Living Community: http://www.freyarchitekten.com/en/projects/heidelberg-village/The Frey Group, which includes the project and property development company, Freie Liegenschaftsverwaltung GmbH, the leasing company pro scholare GmbH, and Frey Architekten, is a part of a vibrant network of around 30 employees with many years of experience and expertise in the construction industry. The Frey Group pursues sustainable urban development and considers the social and environmental aspects in every one of its projects. http://www.freyarchitekten.comQiaozhi Meng Bertha-von-Suttner-Straße 14 79111 Freiburg im Breisgau Germany

You can edit or delete your press release Chinese Camera Team at Frey Architekten in Freiburg, Germany here

11-08-2016 | Industry, Real Estate & Constr …
Frey Architekten
Sustainable Architect Wolfgang Frey travels with German Minister for Economic Af …
Peking, November 7, 2016 – Roughly six months after Wolfgang Frey participated in the Sino-German Forum in Peking with German Federal Chancellor Dr. Angela Merkel and the Chinese Federal Minister Li Keqiang, Wolfgang Frey accompanied German Federal Minister for Economic Affairs Sigmar Gabriel along with a distinguished trade delegation to the Middle Kingdom. Prior to his departure, Chancellor candidate Sigmar Gabriel was able to announce a breakthrough in the Tengelmann settlement.
08-15-2016 | Industry, Real Estate & Constr …
Frey Architekten
Sustainable Architectural Firm Frey Architekten Offers a Biweekly Free Lunch for …
Whoever said there is no such thing as a free lunch? Sustainable architectural firm Frey Architekten has started a soup kitchen initiative at their Heidelberg Village construction site to unite both construction workers and the residents who will be dwelling in the complex they are building. Every other week they offer a free lunch to bring both worker and home dweller closer together. According to sustainable architect Wolfgang Frey’s Five-Finger-Principle, sustainability
07-15-2016 | Industry, Real Estate & Constr …
Frey Architekten
Sustainable Architect Wolfgang Frey Celebrates his Second Anniversary of Refores …
Wolfgang Frey, a practicing architect who specializes in sustainability in Freiburg, Germany, has found a way to offset his own carbon dioxide „debt“. In the spring of 2014 Mr. Frey began a reforestation project on the Chinese mountain Xishan (‘West Mountain’ in English) in Taiyuan in the Chinese province of Shanxi. This week, Mr. Frey celebrates the second year of his efforts to reduce his carbon footprint in China. Mr.
06-20-2016 | Industry, Real Estate & Constr …
Frey Architekten
Freiburg Architect Wolfgang Frey at the German-Chinese Forum with Federal Chance …
(June 20, 2016) During German Chancellor Angela Merkel’s ninth visit to China in mid-June 2016, she met with Minister President Li Keqiang to deepen German-Chinese economic, cultural and political relations. Along with Merkel and Keqiang, Wolfgang Frey, owner of Frey Architekten, was in attendance at the German-Chinese Forum in Beijing. During the panel discussions led by Angela Merkel and Li Keqiang at the fourth German-Chinese Intergovernmental Consultations, both governments agreed to