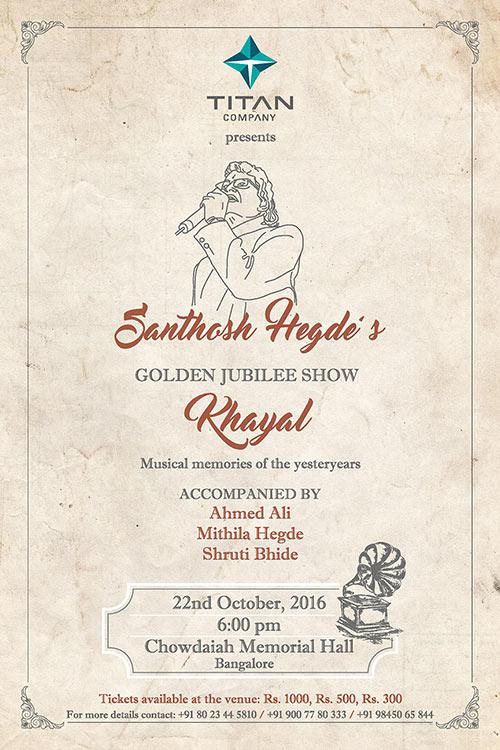 TITAN Presents a Reprise of Bollywood's Golden Classics.Bangalore, India, October 21st, 2016 -- TITAN Presents a Reprise of Bollywood's Golden Classics.Date: 22nd October '16, Chowdiah Memorial Hall, BengaluruSanthosh Kumar Hedge, a man whose seasoned voice serves as a memoir to Bollywood's music, is a self-taught musician who has successfully completed 50 years in the music industry. To mark this momentous occasion, he will be performing at 'The Golden Jubilee Show' at Chowdiah Memorial Hall, Bengaluru, organized by Titan.KHAYAL, as the word symbolizes, will be a token reminiscent of Bollywood's yesteryear's music. This escapade will also witness some of the finest musical talents; one of which is Mithila Hegde, his daughter who has been sharing the stage with her father since the age of 9. Joining them will be Ahmed Ali, a renowned Hindustani/Sufi artiste from Kolkata; and Shruti Bhide, a popular singer/theatre performer based in Bangalore will heighten the fervour of this performance with their soul-stirring music. The band will also comprise of a 15-member reputed orchestra from Kerala, who have played for the likes of Yesudas, S. Janaki, and Unnikrishnan, to name a few.With 10,000 performances to his credit, Santhosh Hegde is known for the ease with which he transitions through various genres of music. His tryst with music goes back a long way back to 1966, when a group of local musicians and him organized a stage show called "Young Talents' Night" at the Don Bosco Hall in Mangalore, and it's been 50 years since. A film buff in his teenage years, he eagerly awaited the release of Hindi films. When the numerous songs served as a source of respite for the rest of the audience, he would be the only one to stay back to listen and memorize the lyrics to each of the tracks. Inspired by All India Radio and Bollywood Classics, he embarked upon his musical journey. The joy that Santhosh derives from connecting with people through music, gives him immense gratification.Tickets for the show will be available at the venue, Chowdiah Memorial Hall, for a price of Rs 1000, Rs 500 & Rs 300.For further queries, call on +91 90 0778 0333.Contact Details: Mithila Hegde +91 90077 80333 mithila.hegde@gmail.com https://www.facebook.com/events/959979447441946/

You can edit or delete your press release KHAYAL: A Musical Repertoire by Santhosh Hedge here