Press release from: Indo US Media 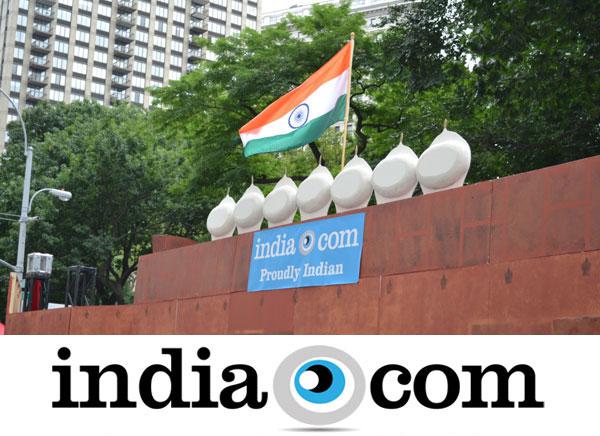 India.com is the new the online destination for everything Indian

(New York, New York – August 19, 2013): India com, a ZEE Entertainment initiative, launched in the United States with a big Bollywood fanfare at the 33rd annual India Day Parade in New York City. The parade which is the largest gathering of the Indian community outside India, had more than 150,000 footfalls. India com built a 70ft replica of the Red Fort, aka “La Qila” The Red Fort is the 255-acre complex in New Delhi built in the 17th century by Mogul emperor Shah Jahan, who also built the Taj Mahal. Every August 15th on Independence Day, the Red Fort is the chosen location where the Prime Minister of India hoists the country’s flag and delivers a national speech from its ramparts to a loud and proud crowd. Inside the fort, a royal red carpet welcomed the enthusiastic crowd and invited them to sign up for a new @india com email ID. There were more than 40 Macintosh computers laid out on a glass table. The inside walls of the fort were decorated with images that defined India com. After registration, people went home with fun India com freebies. India com is a new online platform for everything Indian in an instant – from breaking news, business, and Bollywood to sports, travel and free classifieds. The website combines these one-of-a-kind features with an e-mail portal that will keep you connected. india com launched in India back in 2011 and has since gained 28 million unique users making it one of the fastest growing portals.Other highlights of the parade included marching bands, over 40 floats, 100 food vendors, and the presence of famous Bollywood actress Vidya Balan and anti-graft crusader, Anna Hazare.About India com: India com is the first of its kind website launched by the ZEE Group providing its users with the latest news on Indian business, politics, Bollywood, sports, travel, and more. It is the ultimate platform for all go-to information about India and is easily accessible on your desktop, tablet, or smart phone. With news fueled straight from ZeeNews com and Dna india com, India com provides current, credible, and intelligent information for the user who wants India at their fingertips.Company/Publicist: Indo US Media Forsythe Media Group, LLC Suite 2004, 76 N Broadway Hicksville, NY 11801 (M)516-303-4002 (O)516-390-7847

More Releases from Indo US Media

09-10-2013 | Leisure, Entertainment, Miscel …
Indo US Media
INDIA.COM LAUNCHES IN TRUE BOLLYWOOD STYLE
(New York, New York – August 19, 2013): India.com, a ZEE Entertainment initiative, launched in the United States with a big Bollywood fanfare at the 33rd annual India Day Parade in New York City. The parade which is the largest gathering of the Indian community outside India, had more than 150,000 footfalls. India.com built a 70ft replica of the Red Fort, aka “La Qila” The Red Fort is