The engines are warming up for of the fourth edition of the Chianti Star Festival: the meeting between art and science enriched by the presence of classic cars 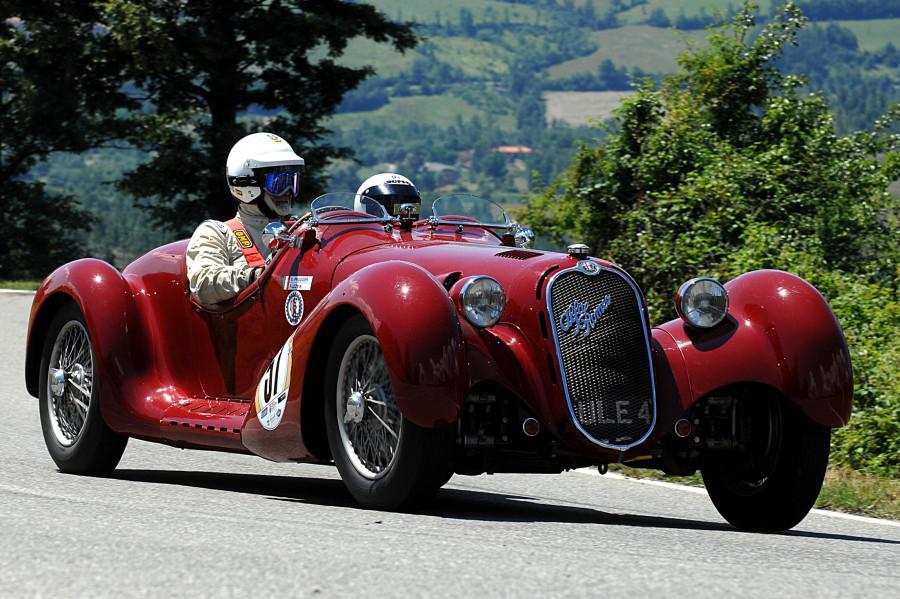 The fourth edition of the Chianti Star Festival will take place from 18 September to 4 October 2016 at Palazzo Malaspina in San Donato in Poggio. 18 international artists will be exhibiting paintings, sculpture, photography and digital art and will participate in the collateral: meetings, tastings and stargazing at the Chianti Observatory (Osservatorio Polifunzionale del Chianti).The exciting novelty of the 2016 edition is “Strade Bianche, Vino Rosso”, an elegant classic car rally organized in collaboration with ACI Florence and the Scuderia Biondetti. “Strade Bianche, Vino Rosso”, a sporting and cultural event that follows both tradition and innovation, fits perfectly with the theme of the Festival dedicated to the meeting between art and science. The technology and design of the best manufacturers have created cars considered by many as works of art (as recent record sale results of classic cars demonstrate).The “Strade Bianche, Vino Rosso” rally will take place on Sunday 18th September 2016 to coincide with the inauguration of the Chianti Star Festival. The participation of the Scuderia Biondetti at this event “Strade Bianche, Vino Rosso” provides an added value with the presence of these extremely important classic cars. The route will take the classic car enthusiasts through the heart of Chianti, starting from Panzano in Chianti to the Badia a Passignano, the new Cantina Antinori at Bargino, to arrive at 6pm at Palazzo Malaspina in San Donato in Poggio.The Chianti Star Festival is organized by Studio Abba in Florence, in collaboration with Giada Rodani, the Chianti Observatory (Osservatorio polifunzionale del Chianti), the ‘Pro Loco’ of San Donato, the Anèmic Association and the ‘Giuseppe Verdi’ Philharmonic Association. The Festival is held under the patronage of the Region of Tuscany and the local town council, ‘Unione Comunale dei Chianti Fiorentino’.Since the first edition held in 2013, the Festival has brought protagonists of the contemporary art world and science to the Florentine Chianti region, for an exciting series of meetings, conferences, concerts and shows. Each year, the exhibition is judged by a jury and one artist is awarded with the Chianti Star Festival prize. Jury members are: Roberto Casalbuoni, theoretical physicist; Anchise Tempestini, art historian; Giada Rodani, curator of contemporary art exhibitions; Gabriele Rizza, journalist, expert in cinema and theatre; Massimo Ricci, architect, member of the UNESCO Central Forum; David Baroncelli, Mayor of Tavarnelle Val di Pesa. The award and symbol of the Chianti star Festival is a terracotta sculpture created by Eugenio Riotto at the Montecchio furnaces and in this way, the material par excellence of the Chianti region has been used. Another “star” of the Festival, together with international contemporary artists who exhibit at Palazzo Malaspina, are the stars in the literal sense, which can be observed from the Observatory of Chianti, as well as typical products of the region, including olive oil and wine.The Chianti Star Festival award is also presented to an individual who, for various reasons has helped to promote the area or the Festival itself. Among the past recipients of this award are: the astronaut Paolo Nespoli (who will return into space for the third time in 2017), the architect Marco Casamonti who designed the new Cantina Antinori at Bargino and Albiera Antinori representing the family who commissioned the building; actors Ennio Fantastichini (Enrico Fermi “I ragazzi di via Panisperna by Gianni Amelio) and Giorgio Colangeli (who before becoming an actor was trained as a physicist); and Maestro Bruno Canino.Artists participating in the 2016 editionLawrence Armstrong Trond Are Berge Stefania Bertini Cavelti William Braemer Mary Brilli Joan Criscione Beatrice de Domenico Maiada El Khalifa Sylvie Hamou David Harry Sumio Inoue Michael Katz Fiorella Noci Tereza Ordyan Chris Reichenbaum Susanne Sjögren Enzo Trapani Max WernerCHIANTI STAR FESTIVAL San Donato in Poggio and other locations from 18 September to 4 October 2016 Opening: 18 September 6.30pm Location: Palazzo Malaspina, Via del Giglio 31, San Donato in PoggioOpening hours at Palazzo Malaspina: 9.30-12.30 | 4-8pm | closed Wednesdays Free entrance www.chiantistarfestival.org For information on the exhibition and collateral events: Studio Abba +39 055292082 info@studioabba.comStudio Abba organizes contemporary art exhibitions in Italy and abroad. The services offered include: brain storming and elaboration of ideas with the client, programming the event, contact with artists and critics, mounting the exhibition, catalogue design and promotion of the exhibition. Artists from all over the world participate in both personal and collective exhibitions organized by Studio Abba in locations such as Paris, Barcelona, Monaco, London, Miami. In Tuscany, Studio Abba organizes exhibitions in Florence, Lucca, Volterra and Chianti area. Studio Abba organizes the contemporary art exhibition World Art Vision, The first edition took place in 2008 at the Cancun Center, Mexico, located in the heart of Cancun’s prestigious zona hotelera (hotel zone). The second edition was held in the heart of the historical centre of Barcelona, Spain at the Real Círculo Artístico.Via di Santa Maria a Marignolle 30 b 50124 Florence Italy +39 055292082 info@studioabba.com http://www.studioabba.com

You can edit or delete your press release The engines are warming up for of the fourth edition of the Chianti Star Festival: the meeting between art and science enriched by the presence of classic cars here

03-19-2018 | Arts & Culture
Studio Abba
OpenArtCode Florence: contemporary art enters the spaces where Brunelleschi and …
The Mediceo Laurenziano Complex, (that unites amongst others, the Basilica of San Lorenzo and the Salone di Donatello, Michelangelo’s Laurentian Library and the Medici Chapels) that is visited by thousands of people each year from all over the world, will host the international artists of the OpenArtCode Group. From 19th April to 8th May 2018 in the Salone di Donatello of the Basilica of San Lorenzo, contemporary art enters the
07-01-2016 | Arts & Culture
Studio Abba
Oxo Tower Gallery on the Southbank hosts Americans in London exhibitio
A celebration of five exciting American artists at a vibrant, landmark venue - gallery@oxo - on the cultural banks of the River Thames. Sophisticated art lovers and those just looking for something a little different can feel the joy of life itself, as absorbing colour and charisma invigorate the air of gallery@oxo on the Southbank open from 20th-24th July. The five artists - David Harry, Michael Katz, Chris Reichenbaum, Tiril
10-30-2008 | Arts & Culture
Studio Abba
The Museo Regional de Durango "El Aguacate" in Durango to host Jackie Sleper's l …
From 5 November - 19 December 2008, the Museo Regional "El Aguacate” in Durango, Mexico, will host the famous Dutch artist’s, Jackie Sleper, touring exhibition "Dulce y Amargo" inspired by, and dedicated to, Mexico and the Mexican painter Frida Kahlo and curated by Matty Roca. Jackie Sleper, the winner of the section “Sculpture and Installation” at the Florence Biennale 2007, has always been fascinated by Mexico and the artist Frida
09-30-2008 | Arts & Culture
Studio Abba
Passion for Life at the Grand Palais in Paris
The next group art exhibition Passion for Life will be held from November 21-30, 2008 at the Grand Palais in Paris, in support of the Institut Curie. Following several art exhibitions in Italy, Mexico and the Principality of Monaco, Passion for Life has been offered the opportunity to exhibit in Paris, France, under the banner of the prestigious Société des Artistes Indépendants. Following the invitation of the President of the