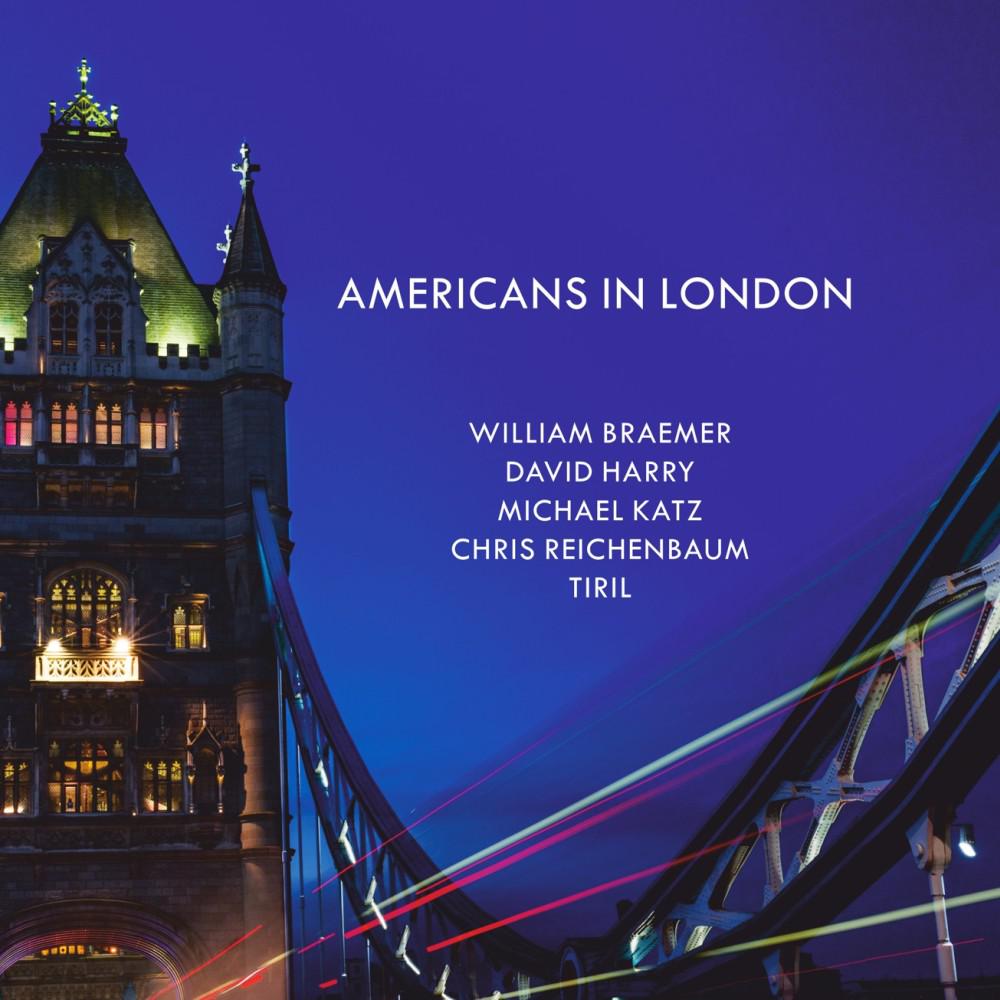 A celebration of five exciting American artists at a vibrant, landmark venue - gallery@oxo - on the cultural banks of the River Thames. Sophisticated art lovers and those just looking for something a little different can feel the joy of life itself, as absorbing colour and charisma invigorate the air of gallery@oxo on the Southbank open from 20th-24th July. The five artists - David Harry, Michael Katz, Chris Reichenbaum, Tiril and William Braemer - are represented both by Art Fusion Galleries in Miami, USA and Abba Gallery in Europe. William Braemer, artist and Director of the successful Miami gallery, ArtFusionGalleries and Vito Abba, curator of the show “Americans in London”, have worked together for a number of years and the stimulating idea of bringing ‘Americans to London’ appealed to their sense of enterprise. As curator Vito Abba recounts “When I was in Miami last December for Art Basel week and William suggested the idea of an exhibition in London for a particular group of American artists, I accepted this stimulating proposition without ado”. Vito Abba continues “who will have the opportunity to visit this beautiful exhibition will see, emerging from the diversity and originality of the artists, a fil rouge, a constant reference, a common denominator: American Abstract Expressionism, with its European roots. The title of the exhibition, 'Americans in London', underlines the influence of the movement that gained a lot of space on the large walls of American museums and proudly stole the limelight from Paris”. Tiril’s paintings - highly personal and almost transcendent in her use of colour - reveal aspects of Robert Motherwell and Franz Kline in the heavy black brushstrokes, sometimes with scratches. Tiril then adds a surprising green or a spiritual, gold streak, that reminds one of Byzantine mosaics. The use of colour is also dominant in David Harry’s art where one sees notes of Sam Francis, David preferring 'anti-action painting', with his large precise brushstrokes that infuse movement and depth into the large canvases. William’s paintings offer Rothko-like colours, warmed by the sun of Miami, with a nod to the Impressionists whilst clearly looking to his American abstract expressionist predecessors. In his sculptures we find forms worthy of 4th century B. C. Athens combined with flashes of Dadaism and Nouveau Réalisme. Dadaism, that paved the way for abstract expressionism, can also be seen in the work by Michael Katz. Here the medium is different: he uses photography and digital art but the connection to abstract expressionism is in its very roots: Surrealism and Dadaism. In the ephemeral images in Michael’s work, we see a direct reference to Paul Citroen and Raoul Hausmann, taking us back to the early photo collages. Once again, we find a reference to abstract expressionism - this time in the art of Adolph Gottlieb and William Baziotes - in the chromatic choices and shapes in the paintings by Chris Reichenbaum. Her artistic production has a notably American matrix, with a clearly abstract expressionism formation. In short – visitors can revel in a potent combination of vision and genius, literally stepping into each artwork to feel the vibe for themselves. All five artists will be in London prior to the opening reception, so please contact Vito Abba at Abba Gallery or Cristina Muniz for any press inquiries or to arrange an appointment with the artists or curator. William Braemer & Art Fusion Galleries Located in the heart of Miami’s Wynwood Art District this “Chelsea” style 8,000 square foot gallery is representing artists from around the globe. Art Fusion Galleries opened its doors in 2003 and a year later the second and largest gallery opened and it is still growing. William Braemer is the director of Art Fusion Galleries. Vito Abba & Abba Gallery For many years the team at Abba Gallery, based in Florence Italy and headed by owner Vito Abba, has organised and curated successful collective and solo shows of contemporary artists of international fame in many cities worldwide, including Paris, London, Madrid, Shanghai, Venice, Monte-Carlo. Since 2014, Abba Gallery has a permanent exhibition space within the Art Fusion Galleries in Miami. gallery@oxo is situated on the Riverside Walkway at the heart of one of the richest cultural areas of London, between the London Eye, The Hayward Gallery and Tate Modern. Oxo Tower Wharf is a landmark building on London’s South Bank. Address: gallery@oxo Oxo Tower Wharf, Bargehouse Street, South Bank, London, SE1 9PH Exhibition dates and times: 20-24 July 2016 - 11am-6pm Free admission Vernissage Opening date and times: 21 July 2016 - 6.30pm-8.30pm http://www.abba.gallery/londonStudio Abba organizes contemporary art exhibitions in Italy and abroad. The services offered include: brain storming and elaboration of ideas with the client, programming the event, contact with artists and critics, mounting the exhibition, catalogue design and promotion of the exhibition. Artists from all over the world participate in both personal and collective exhibitions organized by Studio Abba in locations such as Paris, Barcelona, Monaco, London, Miami. In Tuscany, Studio Abba organizes exhibitions in Florence, Lucca, Volterra and Chianti area.Studio Abba Via di Santa Maria a Marignolle 30 b 50124 Florence Italy +39 055292082 info@studioabba.com

03-19-2018 | Arts & Culture
Studio Abba
OpenArtCode Florence: contemporary art enters the spaces where Brunelleschi and …
The Mediceo Laurenziano Complex, (that unites amongst others, the Basilica of San Lorenzo and the Salone di Donatello, Michelangelo’s Laurentian Library and the Medici Chapels) that is visited by thousands of people each year from all over the world, will host the international artists of the OpenArtCode Group. From 19th April to 8th May 2018 in the Salone di Donatello of the Basilica of San Lorenzo, contemporary art enters the
09-16-2016 | Arts & Culture
Studio Abba
The engines are warming up for of the fourth edition of the Chianti Star Festiva …
The fourth edition of the Chianti Star Festival will take place from 18 September to 4 October 2016 at Palazzo Malaspina in San Donato in Poggio. 18 international artists will be exhibiting paintings, sculpture, photography and digital art and will participate in the collateral: meetings, tastings and stargazing at the Chianti Observatory (Osservatorio Polifunzionale del Chianti). The exciting novelty of the 2016 edition is “Strade Bianche, Vino Rosso”, an elegant classic
10-30-2008 | Arts & Culture
Studio Abba
The Museo Regional de Durango "El Aguacate" in Durango to host Jackie Sleper's l …
From 5 November - 19 December 2008, the Museo Regional "El Aguacate” in Durango, Mexico, will host the famous Dutch artist’s, Jackie Sleper, touring exhibition "Dulce y Amargo" inspired by, and dedicated to, Mexico and the Mexican painter Frida Kahlo and curated by Matty Roca. Jackie Sleper, the winner of the section “Sculpture and Installation” at the Florence Biennale 2007, has always been fascinated by Mexico and the artist Frida
09-30-2008 | Arts & Culture
Studio Abba
Passion for Life at the Grand Palais in Paris
The next group art exhibition Passion for Life will be held from November 21-30, 2008 at the Grand Palais in Paris, in support of the Institut Curie. Following several art exhibitions in Italy, Mexico and the Principality of Monaco, Passion for Life has been offered the opportunity to exhibit in Paris, France, under the banner of the prestigious Société des Artistes Indépendants. Following the invitation of the President of the

03-25-2019 | Health & Medicine
Smilepod
Smilepod :– Making London Smile!
People often say it is hard to find a dentist you like in London. You want a convenient London Dentist, which provides friendly and professional dental care in an inviting and caring environment. This is the ethos behind Smilepod. All of their 6 centrally located dental practices are within 5 minutes of a tube station. They understand that Londoners are busy and don’t want to miss work to see the
02-19-2018 | Advertising, Media Consulting, …
FirstRank Digital Marketing
SEO Agency London
FirstRank is a leading digital marketing agency based in London, offers Website Development, Search Engine Optimization and Social media marketing service. we provide seamless growth for your business with our digital marketing services and solutions. Our highly competent teams are constantly adding the smile to the faces of our clients. Digital marketing is an investment and our digital marketing Agency focus on returns. In 2012, we started as a SEO company
06-14-2016 | Health & Medicine
Smilepod
Smilepod - Rejuvenate - Facial Rejuvenation London
Rejuvenate at Smilepod are pleased to offer a range of aesthetic treatments in all 7 of our central London studios. Treatments include, Botox, Dermal fillers, and Lip enhancements. All rejuvenation treatments are safely carried out by professional dentists in an approved clinical environment. Dentists have years of medical training and in-depth understanding of the mouth and facial area. Dentists regularly perform intricate procedures so you are in very safe hands. If you
05-21-2012 | Health & Medicine
Otto Bock HealthCare GmbH
London 2012
Off to the Paralympics with 15,000 spare parts Ottobock, the medical equipment company, is preparing for a large-scale operation at the Paralympic Games in London (29 Aug. to 9 Sept. 2012). Some 4,200 athletes are expected at the second largest sports event in the world. In order to ensure technical service for them, Ottobock is sending 78 orthopaedic technicians from 20 countries. The first vehicles are already transporting 9
04-20-2011 | IT, New Media & Software
darcydevelopments
Web Design in North London
Darcy Developments has moved to the West Hampstead area of North London. Originally based in Manchester and building up a strong client base there, including the exclusive Manchester Grammar School, they have decided to up shop and make the move to the big city. They specialise in Web Design, with an emphasis on clean, simple layouts with a strong message associated with it. They also provide ecommerce solutions such as Paypal integration
11-23-2010 | Business, Economy, Finances, B …
Propacea Limited
London House Prices Fall
Property agents in London have reported a record gap between asking prices and actual sales prices. According to analysis by agents Douglas & Gordon, which compared the asking prices on the Rightmove website with those logged on the Land Registry, there is now an average £79,000 gap between the two figures. This compares with a gap of £6,574 in 2003. Buyers now routinely offer £50,000 or more beneath
Comments about openPR
OpenPR ist the nicest and most clearly laid out PR platform I have seen to this day. The press releases are displayed very nicely and clearly and without any unnecessary frills. The updates are fast and the finished release looks appealing and is clearly legible. Even with 16 years of experience one discovers new things from time to time. Congratulations!
Gabriele Ketterl, Director Marketing & PR, Menads