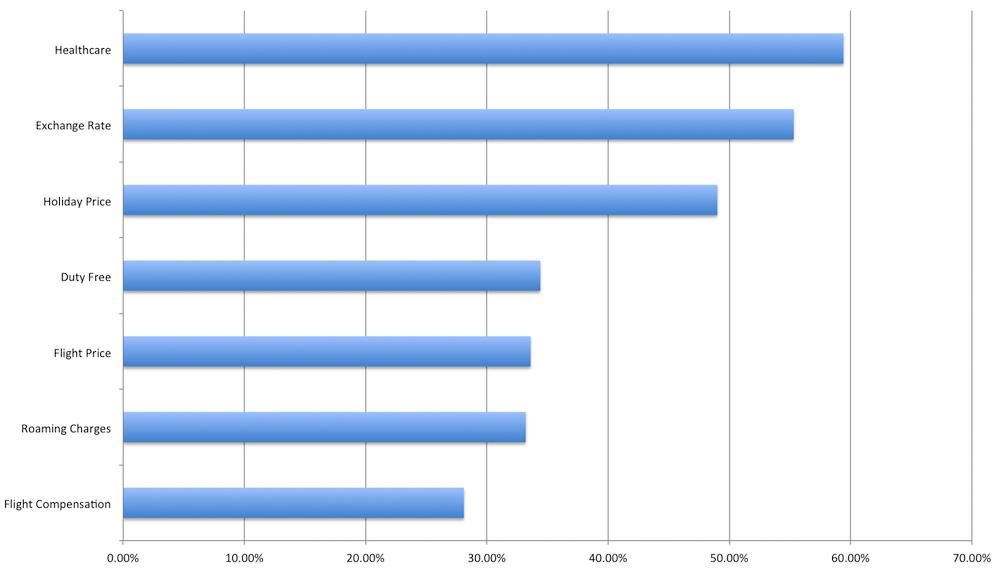 Holidaymakers have been left nursing serious concerns about the impact that victory for the Leave campaign in the EU Referendum will have on their future travel plans, according to a survey from leading independent travel agent Traveltext.co.uk Data compiled by the online agent following the much-discussed referendum revealed that more than 85% of respondents were worried in some way about the impact of Brexit on the travel industry. Those concerns covered a range of different topics, from the overall cost of a holiday through to the fluctuating pound and the possible removal of free healthcare whilst overseas. Whilst fewer than 10% stated that travel related issues had been a factor when deciding which way to vote, almost 90% insisted they were aware of the possible impacts on holidaying in the EU prior to placing their vote. That knowledge was based on information gleaned from a wide range of sources, from the UK’s largest travel association ABTA to academic papers written by specialists, and from personal knowledge of both the travel industry and the financial markets through to the wider media. Following the Leave result, an overwhelming 85.2% expressed concerns about the impact on travel within the EU, with nearly 40% revealing that the vote could force them to change future travel plans; either looking beyond the EU for their holiday or simply taking a break within the UK. In terms of their concerns, 59.4% of respondents were worried about the possible loss of the European Health Insurance Card, which currently provides holders with access to free or reduced cost healthcare within Europe. The impact of the vote on the value of the pound against the Euro was of concern to 55.3% of respondents, with just under 50% saying they felt worried that the cost of a holiday within the EU would rise. Flight prices and compensation regulations, mobile phone charges and the impact of losing free trade and a return to duty free were also of concern to more than 25% of respondents. “Issues like the economy and immigration have been discussed at length by the media in recent weeks, but the impact of Brexit on the travel industry is something that is clearly of real concern to the general public,” Traveltext.co.uk managing director Chris Brown said. “Although we knew there would be people who were worried what the future holds on the back of the Leave vote, a figure of more than 85% was much higher than we expected, and shows that the impact on travel is a bigger issue than many believed. “Exactly what impact Brexit will have remains to be seen in the longer term as the government works to negotiate our exit from the European Union, but it is still business as usual in the short term as any EU directives remain in place.”Notes:Respondents were given the chance to select from the following seven options if they had expressed concern over the impact on travel in the EU. The full breakdown is as follows:Free or reduced cost healthcare through the EHIC programme could disappear: 59.4% The fluctuating pound means I'll get less Euros for my money: 55.3% The cost of my holiday could rise: 49% Leaving the EU will mean a return to duty free and the loss of freedom of trade: 34.4% The price of cheap flights could rise: 33.6% Mobile phone roaming charges could increase: 33.2% EU directives on compensation for delayed/cancelled flights may disappear: 28.1%About Traveltext:Traveltext Limited is part of the Online Travel Group and offers both an online travel agency experience, together with a traditional UK call centre service for more tailored holidays to destinations around the world.Traveltext operates on the basis of complete customer satisfaction and taking the fuss out of holidays. While price is important, Traveltext also recognises the importance of dedication and delivering value to its customers.Traveltext Limited also offers a unique business model by operating via and in partnership with sub postmasters up and down the country, helping sub postmasters offer holidays in partnership with Traveltext limited thereby increasing their retail revenue.Traveltext Limited 3 Cygnus Court Beverley Road East Midlands Airport Derby DE74 2SA

05-18-2016 | Tourism, Cars, Traffic
Traveltext Ltd
Traveltext's alternative Euro 2016
You don’t even have to be a sports fan to know that this summer, the England football team will be heading off to the latest major international tournament with the hopes of a nation resting on the shoulders of the likes of Wayne Rooney, Jamie Vardy and Dele Alli. The fact that the tournament has expanded this year to include no fewer than 24 nations means that the eyes of Europe

10-09-2018 | IT, New Media & Software
Ingenium Softech
Travel Mobile Application Developers
we have extensive experience in creating high performance, feature-packed native mobile applications for all the major platforms including iOS, Android..Travayoo Mobile App Development takes its best position and strives to work with the growing outline. Rather than mobile app development, our company also works on B2B , B2C booking engine system. Our mobile application development process integrates design and development to come up with a flexible process that delivers result. INGENIUM
06-07-2018 | Tourism, Cars, Traffic
Triphobo
Las Vegas Travel Tips
The city of Las Vegas is known as a universal goal of betting in the clubhouse that are situated over this city and the nightlife that is offered to the voyagers, who visit this goal from various parts of the world. For single ladies voyagers to Las Vegas, the season of New Year ought to have stayed away from as the city is uncommonly swarmed amid this time. Nonetheless, the
11-27-2017 | Tourism, Cars, Traffic
LetsGo2 App
Trending travel platform
LetsGo2 App is the modern platform for travelers coming in & out of Los Angeles. Airport Shuttle: Premium shuttle service from LAX & most airports in the surrounding to all major cities across California. Our unique feature allow travelers to book their trip weeks ahead. Private tour: Explore Los Angeles with our various tour options. We start from your residence and bring you back home. Hollywood tour: Hollywood Sign, Walk
07-12-2017 | Advertising, Media Consulting, …
ReportsWeb
City Travel Briefing: Paris
Paris has been resilient as one of the world's leading tourist destinations despite a host of challenges related to security, accommodation and overcrowding. With a clear focus on reinventing the city for the modern traveller by transforming its infrastructure, culture and attractions, Paris is well placed to compete with emerging cities vying to become the tourist destination of choice. This report outlines Paris's strategy in attracting new (and old) holidaymakers
03-29-2017 | Health & Medicine
Persistence Market Research Pvt. Ltd
Global Travel Vaccines Market
Health related complications are greater in developing countries and rural areas because of dissimilarities in sanitary conditions, available food and water bases. The immunization Practices Advisory Committee of the Center for Disease Control and Prevention (CDC) mentions that travelers should be up-to-date on routine immunizations, irrespective of travel plans. The target population for the travel vaccines market include outbound travelers. The travel vaccines for the prevention of hepatitis A, hepatitis
08-16-2011 | Tourism, Cars, Traffic
South Pacific Travel
Tonga Travel Guide Launched
South Pacific Travel has launched its online Tonga Travel Guide with 125 pages of maps, photos, drawings, and travel information. Tonga.SouthPacific.org is based on the Kingdom of Tonga chapter from Moon Handbooks South Pacific, now fully updated by the original author David Stanley. The 11 digital map files used in the printed book have been modified for web use. The site outlines the many sports and recreation opportunities in Tonga. The
Comments about openPR
I can't but agree to the positive statements about your portal: easy to use, clear layout, very good search function, and quick editing!
Jens O'Brien, Borgmeier Media Communication