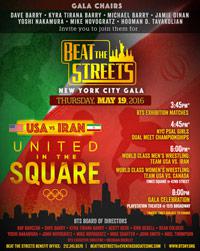 EZ Flex made our mat debut in Times Square recently with two major wrestling events, celebrating this year's upcoming Olympic Games in Rio and participating in Beat the Streets' annual gala.Set among the storefronts and mega-billboards in the heart of New York City, the EZ Flex wrestling mat, custom-made for Beat the Streets NY, made its inaugural appearance during the Road to Rio "100 Day Countdown" event on April 27th. It was the fourth stop in a tour leading up to Rio Games in August, organized by the U.S. Olympic Committee, bringing the excitement of the Olympics to fans across the country. Wrestling was showcased in one of the event's athlete demonstrations, featuring Olympic gold medalist Jordan Burroughs and three-time World Champion Adeline Gray in a series of exhibition matches.Just three weeks later, EZ Flex was back for "United in the Square", the seventh annual Beat the Streets Gala. The yearly wrestling event features matches between some of the top wrestlers from the United States and around the world, raising money for the non-profit program which works to make wrestling more accessible to NYC's youth, providing opportunities for at-risk boy and girls and building lifelong skills. This year's gala on May 19th, featured five US Olympic qualifiers facing off against challengers from Iran, South Korea, and Canada. In his match, Jordan Burroughs defeated Iran's Peyman Yarahmadi, remaining undefeated in his six consecutive BTS galas.In all, the gala was a great success, raising over $1 million for Beat the Streets.EZFlex prides itself on producing quality mats at an affordable price.Vault Event Media 7533 Forsyth Blvd. Clayton, MO 63105 lisa@vaulteventmedia.com www.vaulteventmedia.com 314-261-4300

06-10-2020 | Arts & Culture
Bradscanvas
Olympic Sports from Above by aerial photographer
A Sydney based aerial photographer Brad Walls, known as Bradscanvas has been working on a body of work that uses a drone to capture Olympic sports from above. In 2019, after being inspired by aerial artists that focus on higher elevation compositions, Brad began an ongoing project to capture people from a lower elevation in what he defines “the aerial portrait ‘sweet spot’, too high for handheld DSLRs but low enough
04-06-2016 | Arts & Culture
Duplicon
Google celebrates first modern olympic games
Google celebrates the 120th anniversary of the first modern olympic games. On April 6, 1896, the Olympic Games, a long-lost tradition of ancient Greece, are reborn in Athens 1,500 years after being banned by Roman Emperor Theodosius I. At the opening of the Athens Games, King Georgios I of Greece and a crowd of 60,000 spectators welcomed athletes from 13 nations to the international competition. Doodle designer Olivia Huynh created 4
09-12-2012 | Logistics & Transport
Pluscrates Ltd.
Commercial Relocation Makes Hay in Olympic Summer
The traditional summer upturn in commercial relocation saw early and unprecedented activity ahead of the London Olympics, according to John Mitchell, Managing Director of crate rental specialist, Pluscrates Ltd. “Crate rental activity is a crude but effective indicator for commercial relocation. We added close to 100,000 crates to our working stock ahead of the London Olympics and, importantly, for others in the commercial moving business who saw a similar uplift, that’s
11-02-2011 | Fashion, Lifestyle, Trends
Olympic Lawn & Landscape
Olympic Lawn’s Fall Planting Recommendations
Kansas City’s first frost may be just around the corner, but fall season is still in full swing. Fall is one of the prettiest seasons in the Midwest, with the rich hues of reds, yellows and oranges appearing through leaves and fall foliage. To beautify your home this season, consider planting long-lasting fall plants. “Fall is one of the best times to plant perennials and to add long-lasting, colorful annuals to
04-16-2010 | Energy & Environment
Opus Energy
Young gymnast to train with Olympic hopeful
The winner of the training session with an Olympic hopeful from Corby has been announced, by his sponsors, Opus Energy. Zoe Parker, aged 8, won the training session with Gymnastics World Championship silver medallist, Daniel Keatings, plus four tickets to the European Gymnastic Championships, after entering the competition run by business energy supplier, Opus Energy. Competition winner, Zoe Parker commented: “I am so excited about my training session
09-04-2009 | Energy & Environment
Opus Energy
Opus Energy backs Corby’s great Olympic hope
Opus Energy, a leading independent electricity supplier to UK businesses, is proud to announce it’s sponsorship of one of Britain’s most promising young hopes for London 2012, Northamptonshire-based gymnast Daniel Keatings. Hailing from Corby, 19 year old Daniel has been in world-beating form this year. With a silver medal in the All Around final at the Senior European Championships, Britain’s first ever All Around medal in a major championship, and a
Comments about openPR
Your portal is fast, simple, and easy to use. Others may have more functions but they also demand more editing time, you have to preformat the text in order to achieve a good result etc. I think openPR is really fantastic!
Andreas Knepper, wallmedien AG