It Was Big Week for EZ Flex! 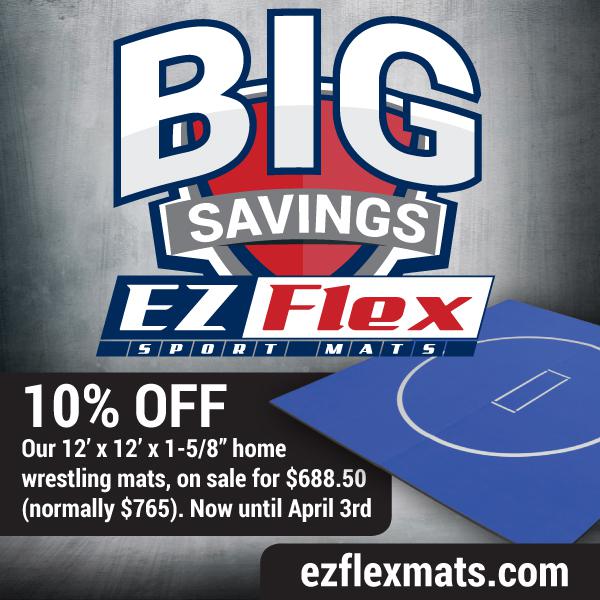 2016 marks EZ Flex's 6th wrestling tournament season, and we're having our biggest year ever as the exclusive mat supplier to more than 20 major events. We've added some great events to our lineup this year, like the WIAA Individual and Team Championships, LHSAA Championships, RIIL Championships, and World of Wrestling Tulsa Nationals. Most notably, perhaps, is our addition of both the Big Ten and Big 12 Wrestling Championships, significantly boosting our presence in the world of college wrestling.The 2016 Big 12 Championship is taking place March 5th and 6th at the Sprint Center in Kansas City, Missouri, and marks the first time the event has been held at a neutral-site. The Championship will be broadcast live on FloWrestling, with the championship session broadcast on FSN. The 2016 Big Ten Championships, also on March 5th and 6th, are hosted this year by the University of Iowa. Catch all the action on BTN Plus, and the championship session on BTN2GoEZ Flex is supplying 8 mats for each event. We've assembled an incredible lineup of tournaments for 2016, and we're proud to have many of the country's best wrestlers competing on EZ Flex this year!EZ Flex takes pride in manufacturing quality sports mats at the most affordable prices around!EZFlex Sports Mats 4709 S Edgewood Terrace Fort Worth, TX 76119877-939-3539 www.ezflexmats.comLisa Walker

You can edit or delete your press release It Was Big Week for EZ Flex! here

07-05-2016 | Leisure, Entertainment, Miscel …
Algoworks
Carrom Championship At Algoworks
Algoworks Technologies had organized a carrom championship within the premises. Algoworks is a firm believer of work hard and play harder philosophy. Amongst the various initiatives taken by Algoworks to keep up the spirits and enthusiasm of their employees, carrom championship proved to be yet another glaring example amongst the myriad competitions and events. A great event was thought upon and organized by the Spasso team at Algoworks. An intra
09-02-2013 | Sports
Hyatt Regency Hua Hin
HYATT OPEN CHAMPIONSHIP 2013
HUA HIN, THAILAND September 2013 – Grand Hyatt Erawan Bangkok and Hyatt Regency Hua Hin, in association with the Banyan Golf Club, recently held the fourth annual Hyatt Open 2013 at the Banyan Golf Club, Hua Hin in order to engage with loyal customers, showcase the hospitality of Hyatt hotels in Thailand, and promote Hua Hin as a golf and wellness destination. As a result of the success of the last
09-14-2010 | Sports
SkatMedia
First Online-Skat World Championship
The International Skat Players Association is arranging an open Online-Skat World Championship. Registration has already started. „We have found partners, enabling us to invite a large number of players. We hope to receive wide interest globally on this Online-Skat championship“, says Rainer Grunert, president of ISPA-World. Through Online-Skat an international participation in the championship is less expensive for everyone. Besides this, the world association hopes to motivate young players with this decision. Thomas
04-30-2008 | Sports
Castrol UK and Ireland
European Football Championship 2008: Shut out
Clean sheets may be the name of the game, but for goalkeepers shot-stopping is the way to top the Castrol Performance Index rankings. And goals. Well, you never know… There are 13 recorded instances of goalkeepers scoring from open play. That number could become 14 this summer, but there are easier ways for our international stoppers to accumulate points … …Like distribution, for example. Long before the back pass rule was introduced
04-25-2008 | Sports
Castrol UK and Ireland
European Football Championship 2008 - The main man?
The last European Championships ended with Cristiano Ronaldo in tears as Portugal lost in the final, but this summer, euro2008. castrolindex.com users reckon the Manchester United man – currently not even in the CPI top 20 – will be crying tears of joy… Had the Castrol Performance Index been up and running for Euro 2004, Ronaldo would have starred prominently. He scored twice – once in the semi-final – and was
04-08-2008 | Sports
Castrol UK and Ireland
European Football Championship 2008: Movers and shakers
The old adage, ‘You’re only as good as your last game,’ is spot on for the Castrol Performance Index which calculates players’ scores from their last seven internationals. Excelling in the latest round of friendlies will boost a player’s score – and show that they’re hitting form at exactly the right time… GOALKEEPERS Jens Lehmann tops the goalkeeper rankings following Germany’s 4-0 drubbing of Switzerland. A series of crucial saves ensured Die
Comments about openPR
Your portal is fast, simple, and easy to use. Others may have more functions but they also demand more editing time, you have to preformat the text in order to achieve a good result etc. I think openPR is really fantastic!
Andreas Knepper, wallmedien AG