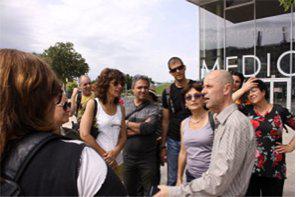 On Wednesday, June 8, 2016 Frey Architekten will gladly welcome a top-class delegation from Israel, Romania and Hungary consisting of CEOs, CFOs, General Manager, Directors and Planner of Shikun&Binui R.E.D., ASBUD GROUP, Horizon Holding und Direct Capital. After a brief reception, head architect Wolfgang Frey will present his innovative ideas for sustainable architecture in his Rieselfeld office. The eleven delegates will then enjoy a tour of Rieselfeld to view several already completed projects.The organizer of the event is the Israel Green Building Council (ILGBC) with local partner Freiburg Future Lab.Shikun & Binui R.E.D. is an affiliate of the Shikun & Binui Group, which has been active worldwide for more than 50 years in construction and development of residential and commercial buildings. Shikun & Binui R.E.D. is widely involved in Central and Eastern Europe (in such countries as Czech Republic, Poland, Romania, Germany and Hungary), and has already built 80,000 square meters of commercial, office and residential projects in Budapest.The ILGBC is a non-profit organization, founded in 2007 with the goal of promoting green architecture in Israel. The ILGBC connects industry, politics, science and environmental protection organizations. Today, the ILGBC is viewed as the leading organization in the field of sustainable planning and building in Israel. It is also committed to international cooperation.Founded in 1959 by Friedrich Frey, Frey Architekten is a sustainable architecture office located in the German eco-city of Freiburg im Breisgau. As one of the pioneers in sustainable architecture, Frey Architekten has been using solar panels since 1972. In addition, the office has an international presence in China, Russia and other parts of Europe. http://www.freyarchitekten.comFrey Architekten Bertha-von-Suttner-Straße 14 79111 Freiburg, Germany Phone: +49 761 477415-0 Fax: +49 761 477415-23 E-Mail: info@architekten-frey.de Press contact: Christine Hohlbaum +49/177 8638661 christine@butterflypr.de

You can edit or delete your press release Top-Class Delegation from Israel, Romania and Hungary to Visit Frey Architekten in Freiburg, Germany here

12-07-2016 | Industry, Real Estate & Constr …
Frey Architekten
Chinese Camera Team at Frey Architekten in Freiburg, Germany
Because of his experience and approach toward sustainable construction and social responsibility, Wolfgang Frey is an in demand consultant in China. A Chinese camera team from Qingdao recently interviewed Wolfgang Frey in his architecture firm in Freiburg, Germany. They continued filming at the Heidelberg Village construction site in Bahnstadt, a global role model for green buildings and modern urban development. The journalists were also interested in learning more about the cooperation
11-08-2016 | Industry, Real Estate & Constr …
Frey Architekten
Sustainable Architect Wolfgang Frey travels with German Minister for Economic Af …
Peking, November 7, 2016 – Roughly six months after Wolfgang Frey participated in the Sino-German Forum in Peking with German Federal Chancellor Dr. Angela Merkel and the Chinese Federal Minister Li Keqiang, Wolfgang Frey accompanied German Federal Minister for Economic Affairs Sigmar Gabriel along with a distinguished trade delegation to the Middle Kingdom. Prior to his departure, Chancellor candidate Sigmar Gabriel was able to announce a breakthrough in the Tengelmann settlement.
08-15-2016 | Industry, Real Estate & Constr …
Frey Architekten
Sustainable Architectural Firm Frey Architekten Offers a Biweekly Free Lunch for …
Whoever said there is no such thing as a free lunch? Sustainable architectural firm Frey Architekten has started a soup kitchen initiative at their Heidelberg Village construction site to unite both construction workers and the residents who will be dwelling in the complex they are building. Every other week they offer a free lunch to bring both worker and home dweller closer together. According to sustainable architect Wolfgang Frey’s Five-Finger-Principle, sustainability
07-15-2016 | Industry, Real Estate & Constr …
Frey Architekten
Sustainable Architect Wolfgang Frey Celebrates his Second Anniversary of Refores …
Wolfgang Frey, a practicing architect who specializes in sustainability in Freiburg, Germany, has found a way to offset his own carbon dioxide „debt“. In the spring of 2014 Mr. Frey began a reforestation project on the Chinese mountain Xishan (‘West Mountain’ in English) in Taiyuan in the Chinese province of Shanxi. This week, Mr. Frey celebrates the second year of his efforts to reduce his carbon footprint in China. Mr.

03-18-2019 | Industry, Real Estate & Constr …
MMH Structures Pvt Ltd
Order Building Material Online
BYOIndia , is an Online Shopping App to purchase building construction materials , serving in Faridabad. Generally ,BYO – Build Your Own is an App based Building Material Online marketplace , where our users can get or purchase building material from their near by suppliers with home delivery. Features BYOINDIA.com Gives you various features which gives you amazing shopping experience. Hundreds of vendors of Building Material suppliers in Faridabad are
11-27-2018 | Industry, Real Estate & Constr …
Market Research Hub
Building Curtain Wall
Looking at the current trends across the Building Curtain Wall market, a new study has been included to the wide database of Market Research Hub (MRH). The assessment is titled "Global Building Curtain Wall Market Insights, Forecast to 2025", which discourses the various market impacting factors like drivers, restraints and opportunities. Moreover, readers are informed about the competitive landscape which enlightens about the different players operating in the Building Curtain
05-11-2018 | Fashion, Lifestyle, Trends
Spartas
COMO® Reimagines Children’s Building
Press Release May 9, 2018, Munich, Germany- COMO®, the revolutionary new building blocks helping to inspire creative children worldwide, is live on global crowdfunding platform Kickstarter and raising funds to bring the project to life. COMO® represents the next generation of building blocks for children and enthusiasts alike. The best thing for parents and children is to build according to their own ideas and imagination. COMO® stands for ‘COmbine
01-18-2017 | Arts & Culture
JanKossen Contemporary
Building Mountains
New York, NY. JanKossen Contemporary is pleased to present Building Mountains, Minjung Kim’s first Solo Show in New York, opening on 2 February, 2017 and on view through 11 March, 2017. The work of Kim demonstrates her foundation in the traditional Korean calligraphic arts as well as the influence of mid-20th Century abstract expressionism, both of which celebrate the ability to convey energy and spirit through the manipulation of line
12-30-2010 | Associations & Organizations
Link Building King
Link Building King Launches Link Building Services
In the internet, when you want to earn much, you would need to ensure that your products stay at the top list and you have a good marketing strategy that can continuously attract customers. Online businesses like any other non virtual businesses we have need to survive in the form of a good internet marketing strategy. There are many applications and internet tools provided in order to maximize the resources
09-26-2008 | Industry, Real Estate & Constr …
Green Building Media
Green Building Media Videos
Green Building Media has installed a video component to their website, expanding the multimedia experience to the built environment in South Africa, involved in green building. Currently they are streaming in podcasts globally and are hoping to expand their selection to cover conferences and events, with speakers and experts presenting useful information on green techniques, designs, construction, and materials and products that are environmentally friendly. This just brings a whole new aspect
Comments about openPR
OpenPR is clearly structured and remains true to its principle of confining itself to the essential parts. OpenPR has proven to be a very good and reliable partner to our media agency: Within the shortest time the releases are online and go down well with the media representatives. The success of OpenPR is reflected in the steadily increasing number of press releases. It is good that OpenPR exists!
Ursula Koslik, Director Marketing & PR, F+W Hamburg