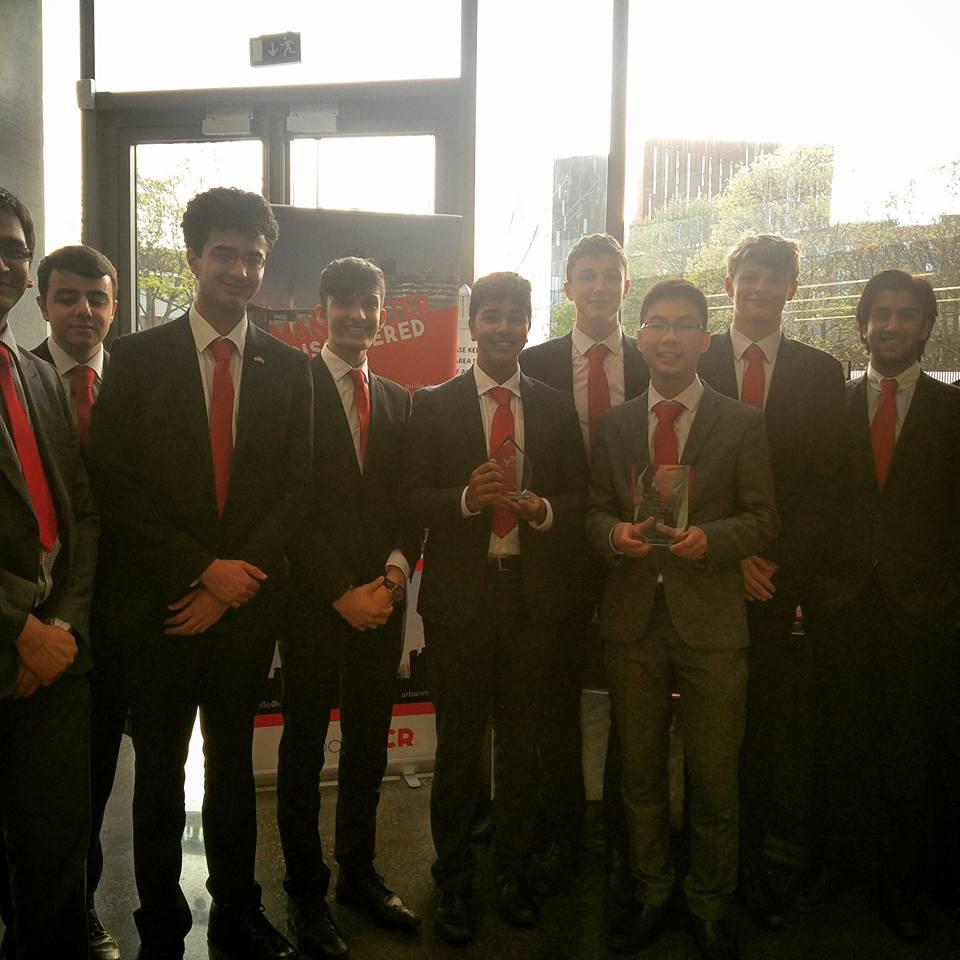 urbanMCR pick up two awards at the Regional Finals

Teenage students from urbanMCR win Company of the Year 2016Budding entrepreneurs studying at Altrincham Grammar for Boys sixth form have won the Company of the Year at the Young Enterprise Greater Manchester Regional Finals on the 4th May, winning the overall award as well as the Best Company Report. They prevailed against competition from the all over the area, having qualified as winners from the Trafford Final.Young Enterprise is a one-year programme, where thousands of students nationwide set up and run their own business learning about everything from finance to management, appointing directors and operating independently. They set up a trade stand, submitted company reports and delivered a four-minute presentation in front of over 100 people as part of the final. Throughout the year they have held weekly meetings and negotiated business deals with suppliers. They have marketed their business online through social media on their own website, as well as filming an advert. The students set up urbanMCR, as company with a mission of ‘inspiring people to visit Manchester and showcase our wonderful city we are so proud to live in.’ They photographed, designed, wrote and self-published a 100-page book, Manchester Discovered, which is a guide to the best places to visit on a day out in Manchester, complete with an ISBN number, available to purchase on their own website urbanmcr.com or Amazon. They hope to get their book in National book retailers as well as bookstores throughout Manchester.Young Lu, Managing Director of urbanMCR, said ‘’Young Enterprise is a fantastic opportunity and we are all very proud of what we have managed to achieve over the past few months. It has given us a priceless insight into the real-world of business and we have all thoroughly enjoyed this experience’’. The company will now represent Greater Manchester in the North West Finals in June in the hope of securing a place in the prestigious National Finals in London.The group of students hope to establish urbanMCR as a registered company after the one-year programme has come to an end. All 14 members are currently studying for their A-Level exams on top of developing their business. They are already beginning to plan for the future, with a Manchester app development ongoing as well as a new publication schedules for upcoming release.urbanMCR is a Young Enterprise company made up of 14 sixth form students embarking on the Young Enterprise Company programme with a mission of inspiring people to visit Manchester through their social enterprises.urbanMCR Altrincham Grammar School for Boys Malborough Road Bowdon Cheshire WA14 2RS