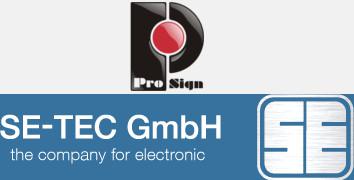 As part of the PACcubes project (http://paccubes.de/), the companies ProSign GmbH and SE-TEC, both situated in Magdeburg, Germany, now work together more closely. The common project PACcubes series is a system solution for automation and monitoring. It is financed and sold by both companies. The development of the soft- and hardware of the PACcubes series is done by the company ProSign, which was founded in 1997. The graphical programming system PACstudio is the specialty of the PACcubes series. To program the controller, no programming language has to be learned, because the application is created by connecting technical signs and symbols into a block diagram. ProSign is already bringing a lot of experience in the areas software engineering and automation systems. Production, logistics and series testing of the PACcubes series is managed by SE-TEC GmbH. SE-TEC has had long-time experience about manufacturing different types of printed circuit boards. A constantly high quality during manufacturing and testing of the components is ensured f. e. by modern systems with image recognition and analytics software. That results in a minimum error rate. A cooperation between companies, which are situated in the same area has the advantage of personal communication. Misunderstandings can be resolved quicker or not even emerge. “Even with today’s IT infrastructure, the development of interdisciplinary system solutions can only be accomplished having immediate involvement and on-site communication between the project partners,” emphasized Steffen Mertens, general manager of ProSign GmbH.About ProSign The German software engineering company ProSign Process Design GmbH is developer of the graphical programming software iCon-L as well as all programs resulting from that software framework like miCon-L, test.con and the automation solution PACcubes. ProSign has many OEM partners with who they distribute controllers for different conditions and requirements with programming software which is exactly tailored to the controller. For further information please visit: www.pro-sign.de www.paccubes.deProSign GmbH Werner-Heisenberg-Str. 1 39106 Magdeburg GERMANY

12-09-2016 | IT, New Media & Software
ProSign GmbH
Cooperation of the companies ProSign GmbH and DRAGO Automation
ProSign GmbH and DRAGO Automation combine their competences and develop a strong all-in-one product including the PACcubes Station and ultra-compact I/O modules. The PACcubes Station PCR-STA31-MC1 will be available in February 2017 and it will be compatible with the ultra-compact I/O Modbus RTU I/O modules from the company DRAGO Automation. That means, the compact, universal I/O modules will be joint with the graphically programmable head station of the PACcubes series. The
07-21-2016 | IT, New Media & Software
ProSign GmbH
Have a look at the graphical programming software PACstudio
In the video tutorial “First steps and overview” (www.youtube.com/watch?v=R_duMg8lLKg) you will get to know the graphical programming software PACstudio. With PACstudio you can program all I/O modules and stations of the PACcubes series. We are showing you how you can create a project, how to connect PACstudio with the PACcubes Station and how easy it is to program the LEDs. In the video you can also watch the application and
04-04-2016 | IT, New Media & Software
ProSign GmbH
PACcubes goes on the Internet of Things via MQTT
The latest trend to connect devices and machines to automate them and control them centrally is unstoppable. The possibilities for data and information exchange on the Internet of Things (IoT) are almost infinite. IoT has already been integrated in most industries like f. e. logistics, heat and power supply, medical engineering, agriculture etc. With the growing Industry 4.0 more ideal and more efficient ways to use resources is created. By
03-17-2016 | IT, New Media & Software
ProSign GmbH
PACcubes – New System for Automation and Monitoring
PACcubes is a new all-round system for automation and monitoring, developed by the engineering company ProSign GmbH. The controller is programmed with the in-house graphical programming system PACstudio. To create a decentral control unit in terms of Industry 4.0, the Programmable Automation Controller PACcubes Station is implemented into PACcloud over an MQTT client. Besides the well-engineered hardware and the connectivity between the devices, special emphasis is placed on the graphical