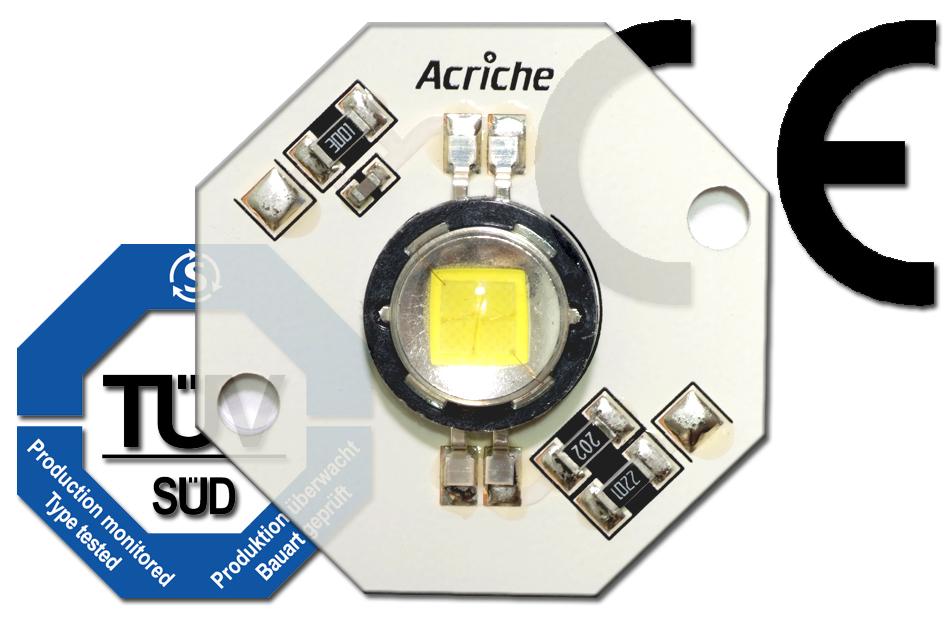 SEOUL, KOREA --(Dec. 4, 2007) -- Seoul Semiconductor, one of the world’s leading LED manufacturers, announced today that Acriche, the world’s first AC-driven semiconductor lighting source, has received CE Marking and German TUV certification, confirming that Acriche conforms to stringent global standards for product safety. Acriche is the world’s first LED package to receive the CE Marking. Environmental regulations are becoming a global issue. In August 2008, the European Union will be implementing the Energy-using Products (EuP) Directive which will require specific electrical and electronic devices to attain the CE-Marking certification before they can be permitted to trade in the European Union. The CE-Marking and TUV certifications validates Acriche’s performance as a safe product, a feature which will help generate substantial sales for Acriche in the European market. Acriche is the world’s first semiconductor lighting source that can be driven directly from an AC outlet without a converter. Acriche, a Seoul Semiconductor patented product, is used in power systems ranging from 100-120 volts and 220-230 volts. Elektronik, one of the most prestigious magazines in Germany, named Acriche its 2006 "Product of the Year" in recognition of its technical innovation. The CE Marking and TUV certification confirms that Acriche meets even the most stringent environmental and safety standards, and further positions the product for continued growth in the European market as well as globally. In November 16, Seoul Semiconductor launched a special pricing event to offer Acriche at 30-40% discount from its usual price for the remainder of 2007. The event, introduced as part of the Acriche one-year anniversary celebration, has generated positive feedback from customers.Yoon Hee Kwon Seoul Semiconductor Tel : +82-31-364-3789 E-Mail : djyh82@seoul-semicon.co.krAbout Seoul Semiconductor Seoul Semiconductor, the world’s leading LED manufacturer, has been named to Forbes and Business Weeks lists as one of the most promising Asian companies. Its product, Acriche, was recently named as "Product of the Year 2006" by Elektronik, one of the most prestigious electronics magazines in Europe. Seoul semiconductors primary business areas are LED packaging and custom module manufacturing. It provides a full range of LED products including AC-driven semiconductor light source, Acriche, High-brightness Power, Side View, Top, Chip, Lamp and High Flux LEDs, and custom type modules. Applications for the company’s LED products include general lighting, signage, back lighting for mobile phones, TVs, notebook computers, automotive lighting, home appliances, signals, etc. Seoul Semiconductor reported US$200 million in sales in 2006. It has 1,251 patents and 100 licenses as of June 30, 2007. Seoul Semiconductor has 18 branches including 3 overseas corporate offices. Its products are also represented worldwide by more than 90 distributors.

02-19-2009 | Business, Economy, Finances, B …
xmedia
SEOUL SEMICONDUCTOR AND NICHIA SETTLE LITIGATION AND ENTER INTO A CROSS-LICENSE
Seoul Semiconductor Co., Ltd. and Nichia Corporation announced that they have settled all litigations on patent and other issues as well as other legal disputes ("Litigations") currently pending between them in the United States, Germany, Japan, United Kingdom, and Korea. The settlement includes a cross license agreement covering LED and laser diode technologies, which will permit the companies to access all of each other's patented technologies. In accordance with the
11-14-2008 | Business, Economy, Finances, B …
xmedia
Seoul Semiconductor concludes a cross license agreement with TOE of Europe
Seoul enters into a cross license agreement with TOE (TridonicAtco Gmbh) of Europe and its patent partners - Based on this cross license agreement, Seoul enhances its flexibility to manufacture various kinds of LEDs besides its own white LEDs Seoul Semiconductor Co., Ltd. ("SSC") today announced that SSC has entered into a Cross License Agreement regarding white LEDs using silicate system phosphors with TridonicAtco Optoelectronics GmbH ("TOE") and its patent partners. Phosphors
10-09-2008 | Business, Economy, Finances, B …
xmedia
Seoul Semiconductor Wins Again over Nichia in Patent Lawsuit
SEOUL, KOREA -- October 1, 2008, Seoul Semiconductor (hereafter "Seoul") announced that it won another victory over Nichia in a patent lawsuit in Korea. A Seoul Semiconductor official said, "Due to repeated victories in patent lawsuits, our position in global LED market has been reinforced, and we will continue to strive to become a leading LED manufacturer and hope to play a pivotal role in 'Green Growth', thereby contributing to
09-25-2008 | Business, Economy, Finances, B …
xmedia
Seoul Semiconductor expresses confidence that it is not infringing Nichia's pate …
SEOUL, KOREA -- September 17, 2008, Seoul Semiconductor (hereafter "Seoul") officially announced it had the means to establish its non-infringement of any valid claim in a lawsuit brought by Nichia Corporation (hereafter "Nichia") in the English High Court, in which Nichia asserts that Nichia asserts through their website and press release that Seoul's Acriche products infringe its patented "annealing" technology. Regarding this lawsuit, Seoul believes it has sufficient prior art