The Art of Miniature Painting 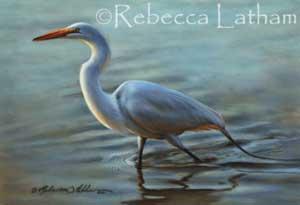 As an artist, Rebecca Latham as well as her mother, Karen, and sister, Bonnie, strive for detail in their painting. Studying with a Flemish master, they have developed their styles for painting extreme realism. Their works, both large and small, are painted “in miniature”. Early Beginnings Miniature painting is a traditional style of art that is very detailed, often referred to as painting or working “in miniature”. Because of their origins as illuminations, they are also painted to have as smooth of a surface as possible. (It is also suggested that miniature art may have been influenced by the medals of ancient Rome as well) Miniature art can be traced back to ancient Egyptian manuscripts on papyrus scrolls. Monks are also often highlighted for their contributions to early miniature painting with their beautifully illuminated manuscripts such as the Celtic Book of Kells and England's Lindisfarne Gospels (both of which measure around 9" x 12"). Some early manuscripts contain miniature paintings on their pages that depict beautiful arrangements of life sized flower arrangements on their borders. The history of miniature painting is also seen throughout the world in various other cultures. Miniature painting began out of necessity for illustrating documents and manuscripts to aid those reading them during a time when many were not able to, before printing was invented. The miniature helped to convey the story and meaning of the written word. Therefore, the art of miniature painting is directly connected to the book arts. The various sized illuminations (pictures) were cut out of these books or documents so that they could be carried more easily. Later, developing from the carried miniature, portrait miniature artists were commissioned to paint small portraits – paintings that were used as we use wallet sized photographs today. These sizes of miniature paintings became popular with collectors and are often referred to as “hand held miniatures”. Portrait miniatures were painted in larger sizes as well, for example master miniaturist, Nicholas Hilliard, Peter Oliver, and Sir Charles William Ross all painted works that were of a larger size. Sizes Miniature painting is sometimes confused and assumed that the pieces must be small or depict subjects on a smaller scale to be considered miniature art, though this is not the case. It is helpful to keep in mind that the origins of the term "miniature" have nothing to do with a size. The word miniature comes from the terms 'minium' (used for the red lead paint used in illuminated manuscripts) and 'miniare' (Latin for 'to color with red lead'). Miniature painting is a style and technique of painting, and as such, a wall sized work could be painted “in miniature”. Authors of the Yale University Press publication, “The English Miniature” have stated that miniatures have been painted large and some works are even considered to be gigantic. Numerous faculty members of the Victoria & Albert Museum in London confirm that miniature paintings are not restricted to smallness. Larger sized miniature paintings are documented throughout history and are recognized today, though painting larger works in miniature is more difficult and time consuming than a smaller piece if the same attention to detail is observed. Miniature art is also unique in that it was and is often used on objects, such as the Russian lacquer boxes that are beautiful examples of Russian miniature painting. Exhibitions Today, there are miniature art societies in western society to help promote and preserve traditional miniature art and the “spirit of miniature”. Their exhibitions feature the hand held miniature paintings (or sculptures) and each exhibition has its own unique guidelines and rules for artists showing in their exhibit. Some of these rules limit the size of work to be no larger than a set square inch. Others limit the size of a subject, such at the 1/6th scale rule that a subject may not be painted larger than 1/6th of it's natural size, or the 2” rule, that an object in the painting may not exceed 2”. Scale rules were initially put in place as a guide for artists starting out in miniature art. There are also many framing restrictions for society miniature works as well. All of these rules are put into place by each show for their own individual and unique exhibitions, and do not define what miniature art is. Artists painting miniatures throughout history were not restricted in their artwork by scale as their subjects were painted to any measurement or scale that the artist deemed pleasing to the eye and their patrons, for both manuscripts and other miniatures. Subjects that are naturally small in size, such as butterflies and insects, were painted life sized. Thus the 1/6th scale rule that is used by some shows and societies today unfortunately causes a bit of confusion to those new to the art form who commonly assume that is it a part of a mechanical criteria of the miniature's definition. The world's experts in miniatures do not recognize the rule as legitimate, and view those embracing it as unknowledgeable, and dismiss them. The term "miniature", as it addresses miniature painting, is often confused with "miniaturize" and some miniature art exhibitions do not refer to miniature as it's initial meaning of techniques, but rather the size of the painting (miniaturized painting). They are two very separate descriptions. Miniature painting is an art form that is very rich in history that continues today by artists from around the globe. The beautiful ornamental qualities of the miniature should be preserved whether it be the intricate large pieces, or intimate hand held works. Many thanks to Joan Willies RMS, the Victoria & Albert Museum, & Patrick Noon. Latham Studios Hastings, Minnesota 55033 Karen, Rebecca, & Bonnie Latham 651-438-9944 http://www.lathamstudios.com As an artist, Rebecca Latham as well as her mother, Karen, and sister, Bonnie, strive for detail in their painting. Studying with a Flemish master, they have developed their styles for painting extreme realism. Their works, both large and small, are painted “in miniature”.

10-23-2006 | Arts & Culture
Latham Studios - Wildlife & Nature Art
Wildlife Artist Family to Show New Paintings Together in International UK Exhibi …
Kent, England, October 21, 2006 – The Lathams, a family of wildlife artists from the United States, will be exhibiting their artwork together for the first time in Britain at the TWASI wildlife art exhibition near London. The family of artists will be showing their watercolor paintings in the 14th Annual Exhibition of The Wildlife Art Society International (TWASI) at the Port Lympne Mansion in Kent, England. This year\'s
10-23-2006 | Arts & Culture
Latham Studios - Wildlife & Nature Art
Minnesota Artist Helping Wildlife Through Art
Bonnie Latham Named Artist of the Year Minnesota, October 19, 2006 – Bonnie Latham's watercolor rendering of a canvasback has been selected as the 2007 Minnesota Ducks Unlimited Sponsor Print Artist of the Year. Her artwork will be reproduced as a limited edition print and distributed to 2007 sponsor members of the Minnesota Ducks Unlimited. Ducks Unlimited (ducks.org) was founded in 1937 with a primary mission of habitat conservation.