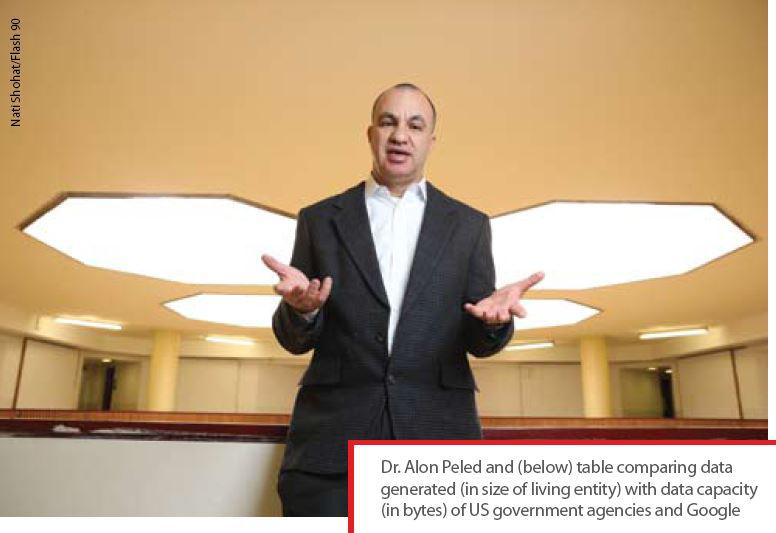 SCOPUS Volume 61 (2014/2015), Pages 28-29Amid growing public concern about government surveillance and threats to personal privacy, the fact that government agencies have a dismal record of information sharing does notsound like a bad thing. But it is in fact a serious problem that costs billions of dollars and endangers lives. Dr. Alon Peled of the University’s Department of Political Science spent years studying the reasons why computer integration projects in the public sector have failed; he subsequently developed an innovative solution.“Some people say: ‘My best privacy protection is that one agency doesn’t know what the other is doing,’” says Peled. “The response is: ‘Okay, but it also means that lives will be lost.’ Indeed, the 9/11 Commission defined the refusal by agencies to share information with each other as the biggest failure during the 14 months before the attacks.” Peled spent “three years working round the clock to develop a solution to this quandary.” His research led him to conclude that an “information sharing impasse” plagues the entire democratic world. Billions of dollars have been poured into solutions — from coercion to President Obama’s Project Open Data to creating a body to establish interoperability standards. Not only did none of these solutions work well, found Peled; they also shared a mistaken assumption — that the various agencies were aware of what data existed and had the goodwill to share.Peled’s solution lies in creating a system of incentives for information sharing. He describes his Public Sector Information Exchange (PSIE) as “an eBay-like mechanism in government where agencies can commoditize their information assets as if they were real assets and, through a credit system, sell and buy from each other.” He laid out the theoretical framework for his idea in his book Traversing Digital Babel: Information, E-government and Exchange, being published by MIT Press in 2014.He also won a Google Faculty Research Award, typically granted to computer scientists, to build a prototype of the PSIE system under the guidance of Google’s Dr. Alon Halevy, who pioneered Google’s Fusion Tables.The first stage of Peled’s project collects open data published by the US federal government and, using web crawlers and crowdsourcing techniques, tracks the data flow: what data was downloaded and used by another agency? The emerging corpus — in itself, of value to agencies and organizations — is the first phase towards developing a data exchange that will lower the cost of finding and exchanging data within large agencies or bureaucracies.Shepherded by Tamir Huberman, Vice-President for Business Development in Computer Science at the Hebrew University’s Yissum technology transfer company, Peled is now turning his basic science idea into a marketable product. Says Huberman: “It is very rare for a theoretical researcher in the social sciences to produce an application that solves an acute real world problem.” [SLS]Yissum Research Development Company of the Hebrew University of Jerusalem Ltd. was founded in 1964 to protect and commercialize the Hebrew University’s intellectual property. Products based on Hebrew University technologies that have been commercialized by Yissum currently generate $2 Billion in annual sales. Ranked among the top technology transfer companies in the world, Yissum has registered over 8,500 patents covering 2,400 inventions; has licensed out 750 technologies and has spun out 90 companies. Yissum’s business partners span the globe and include companies such as Syngenta, Monsanto, Roche, Novartis, Microsoft, Johnson & Johnson, Merck, Intel, Teva and many more. For further information please visit www.yissum.co.il.Tamir Huberman Hi-Tech Park, Givat Ram, PO BOX 39135 Jerusalem, Israel 91390

You can edit or delete your press release Goodwill Exchange here

04-11-2016 | Science & Education
Yissum
Interview: Alon Peled on open data, incentives, and ‘Traversing Digital Babel
By Democratic Audit UK 12/02/2016 Governments across the world have attempted to improve their capacity for open data, with the UK improving its efforts since the turn of the decade markedly. Last year, Sean Kippin interviewed Alon Peled, an academic and computer software expert who has created an incentive-based system and programme for governmental informational sharing which he claims holds the key for improving the way in which data is created
04-11-2016 | IT, New Media & Software
Yissum
NASA includes an Israeli scientist’s challenge in international space apps com …
By JUDY SIEGEL-ITZKOVICH 04/30/2015 (The Jerusalem Post) Prof. Alon Peled proposes a groundbreaking approach for enabling information sharing among public sector agencies, whose computer systems are notoriously complex. For the first time in the history of the US National Aeronautics and Space Administration’s International Space Apps Challenge, it has chosen a challenge based on the work of an Israeli scientist. Others were proposed by developers from the US, Italy, Egypt, Tunisia, Slovenia,
07-26-2011 | Media & Telecommunications
NDS Group Ltd.
Dave Habiger Appointed CEO of NDS Group Ltd. - Dr. Abe Peled Becomes Executive C …
NDS Group Ltd. today announced the appointment of Dave Habiger as Chief Executive Officer, and that in his continuing role with the company, Dr. Abe Peled, previously Chairman and CEO, will assume the full time position of Executive Chairman. Dave Habiger, 42, began his career in media as a founder of Providence Productions. In 1992 he began working with the founding members of Sonic Solutions, later playing an important role in
06-07-2011 | IT, New Media & Software
Gizmox
Gizmox Ranked in Top Ten of Cloud Vendors by SD Times
SD Times 100 recognizes Gizmox for second consecutive year Tel Aviv, 6 June 2011, Gizmox (visualwebgui.com), the developer of the award-winning Visual WebGui (VWG) cloud and mobile platform, announced today that they have been included in SD Times 100 – 2011 as one of the top ten cloud vendors. The ranking, published on June 1st recognizes Gizmox alongside Amazon, Cloudera, Engine Yard, GitHub, Google, Hadoop Project, OpenStack, Salesforce and VMware. Gizmox’s Visual
05-26-2009 | IT, New Media & Software
Gizmox
Visual WebGui releases the first coding-free Point & Click Web Design Tool; Avai …
Tel Aviv, Israel —May 26, 2009—Gizmox, visualwebgui.com, the provider of the Visual WebGui (VWG) rich internet application (RIA) development and deployment platform, announced today the release of Visual WebGui 6.4 Free Preview Version. This cutting-edge version introduces a new Point & Click Web Design Tool that, for the first time, provides a complete coding-free cycle for the creation of complex, enterprise-grade web applications. VWG 6.4’s coding-free application development and coding-free
02-08-2007 | Business, Economy, Finances, B …
Gio Model Agency & Management
Business man Alon Peled invests in the Romanian modeling industry
Alon Peled, the General Manager of Mentor Group, announces that he is now entering in the fashion sector, and wishes to invest in a new launched company in Romania named - GIO Models Agency & Management. “The main reason for this is that I believe that the local fashion field needs new standards and maybe a redefinition of what is quality and professionalism when it comes to modeling agencies. The worldwide
Comments about openPR
OpenPR is clearly structured and remains true to its principle of confining itself to the essential parts. OpenPR has proven to be a very good and reliable partner to our media agency: Within the shortest time the releases are online and go down well with the media representatives. The success of OpenPR is reflected in the steadily increasing number of press releases. It is good that OpenPR exists!
Ursula Koslik, Director Marketing & PR, F+W Hamburg