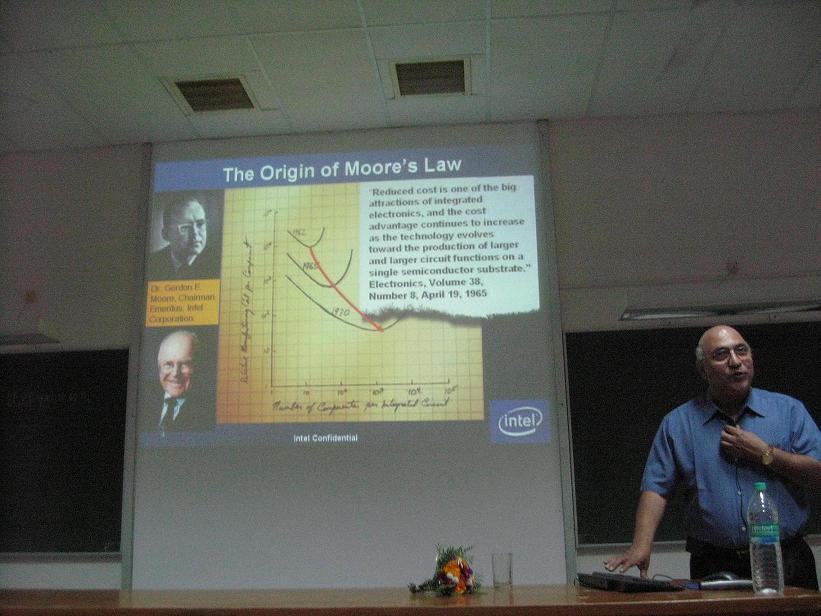 Proud to be a BITSian Intel Techie Sunit Rikhi

Intel undoubtedly leads the industry with research into new technologies such as high-k/metal gate and tri-gate transistors that will enable it to continue the 2-year cycle of Moore's Law for the foreseeable future 42 years ago, Intel co-founder Gordon Moore saw the future and his prediction, now popularly known as Moore's Law, states that the number of transistors on a chip doubles about every two years. For some Moore’s law is about more performance while for some it is about decreasing costs. Moore's Law is only 11 words long, but it's one of the most misunderstood statements in technology. If Google’s Eric Schmidt said "Never bet against Moore's Law", then in 2003, Michael Kanellos editor at large at CNET News.com in describing Myths of Moore’s Law said “When you think of it, Moore's Law isn't about progress; it lays down the rule for the arms race”. Vice President Technology & Manufacturing Group and Director Advanced Design Logic Technology Development, Intel Oregon USA who is none other than Proud to be a BITSian Sunit Rikhi, is currently on India Visit. On Tuesday, 06th November 2007, Mr Rikhi visited his alma mater Birla Institute of Technology and Science (BITS) Pilani Rajasthan where he was a student during 1974-1979 and delivered a lecture on Silicon Technology – Moore's Law in action which was organized by BITS Alumni Association (BITSAA). His talk touched on several issues ranging from extending the lead at 45nm technology with High-k metal gate transistors to impact of Silverthorne on power and size. He highlighted the approaches behind alternating process and product for sustained leadership and the synchronization framework as well the process. He spoke at length on DFM information turn, Intel X chips and sub wavelength lithography. He summarized his lecture stating that Moore’s law continues to provide economic benefit, synchronization of products & process technology is critical for extracting the most value and that co optimization with DFM technique is a key part of the synchronization process. At the end of the lecture, he fielded a volley of questions from students. Vice President BITSAA thanked Mr Sunit Rikhi for his alma mater passion quotient and presented him a special memento. For sure BITS Alum Sunit Rikhi indeed believes standing tall in any crowd Dr BR Natarajan Professor & Dean Birla Institute of Technology and Science Pilani (Rajasthan) 333031 India Phone 91-1596-242210 Fax 91-1596-244183 brnt@bits-pilani.ac.in www.bits-pilani.ac.in Birla Institute of Technology and Science (BITS), Pilani Rajasthan which has set a bench mark in industry university collaboration is one among the top ranking universities in India today offering degrees in various disciplines presently at Pilani, Dubai, Goa campuses and in the near future at Hyderabad campus apart from an array of work integrated learning programmes for HRD of a vast spectrum of Indian corporates.

09-16-2020 | Energy & Environment
Waste King
Captain Tom Moore becomes a Waste King customer
Asked by the BBC to collect some unwanted items from the Bedfordshire home of Captain Sir Tom Moore, Waste King, the environmentally friendly waste collection and recycling services specialist, were delighted to help. The BBC had been doing some filming at Captain Tom’s home in Marston Moretaine and, originally, asked Waste King to supply a four-yard skip to take the resulting waste. However, when the BBC learned about Waste King’s ‘Man
04-27-2017 | Leisure, Entertainment, Miscel …
Music Promotion Club
Sean Moore Drops His Dance Numbers in SoundCloud
The word “music” gives a very positive and energetic vibes. Music has become a way of life and especially to combat with the stress in our daily lives, listening to music of one’s choice is an inexpensive panacea. With the advent of new media, multi-genre music genres have attained mass popularity. SoundCloud site is the hub where music enthusiast can get different music tracks according to their choice. It is
06-22-2016 | Health & Medicine
Roger Moore Dental Practice
Dentist Gloucester – Roger Moore Dental Practice
The Roger Moore Dental Practice is a family friendly dentist in Gloucester town centre who is dedicated to providing the very best dental care to you and your family. Their primary concern is oral health and their aim is to provide very high quality dental treatments at an affordable price. The principal dentist at this dentist in Gloucester is Roger Moore who has over 25 years’ experience in dentistry and
03-29-2012 | IT, New Media & Software
Savvy Web Women
Wendy Moore to address Summit for Rural Leaders
Wendy Moore, international best-selling author, speaker and online engagement strategist will tackle the topic The Power of Social Media in Business when she speaks at the fifth annual Rural Summit in Port Fairy from 18 to 20 April. Wendy Moore said the Rural Summit is an opportunity to join others from government, community and industry in sharing ideas and strategies to create a stronger future for rural towns. “This year’s Summit,
09-01-2011 | Business, Economy, Finances, B …
Moore Stephens
Internal audit boutique joins Moore Stephens
Campbell Tickell Assurance, a specialist internal audit and investigations firm, merged with leading accountants and consultants, Moore Stephens, on 1 January 2011. CT Assurance provides internal audit and investigation services for social housing organisations. The transaction will boost Moore Stephens’ already significant governance, risk and assurance practice. Roger Lustig, CT Assurance’s principal said that the time had come for his firm to take the next step in its development. “We examined a
08-16-2011 | Tourism, Cars, Traffic
Toyota of Greenville
Toyota of Greenville’s Dexter Moore Wins Toyota PROS Award
Toyota of Greenville 2686 Lauren Road Greenville, SC 29607 888-208-0839 FOR IMMEDIATE RELEASE Toyota of Greenville’s Dexter Moore Wins Toyota PROS Award Greenville, SC – Toyota of Greenville’s Dexter Moore has been recognized by Southeast Toyota with the Toyota Professional Retail Outstanding Salesperson (PROS) Award. Moore has been with Toyota of Greenville since 2004 and attributes his success to his communication skills. “I'm not really in the car selling business. I'm in the 'people' business,” he
Comments about openPR
I can't but agree to the positive statements about your portal: easy to use, clear layout, very good search function, and quick editing!
Jens O'Brien, Borgmeier Media Communication