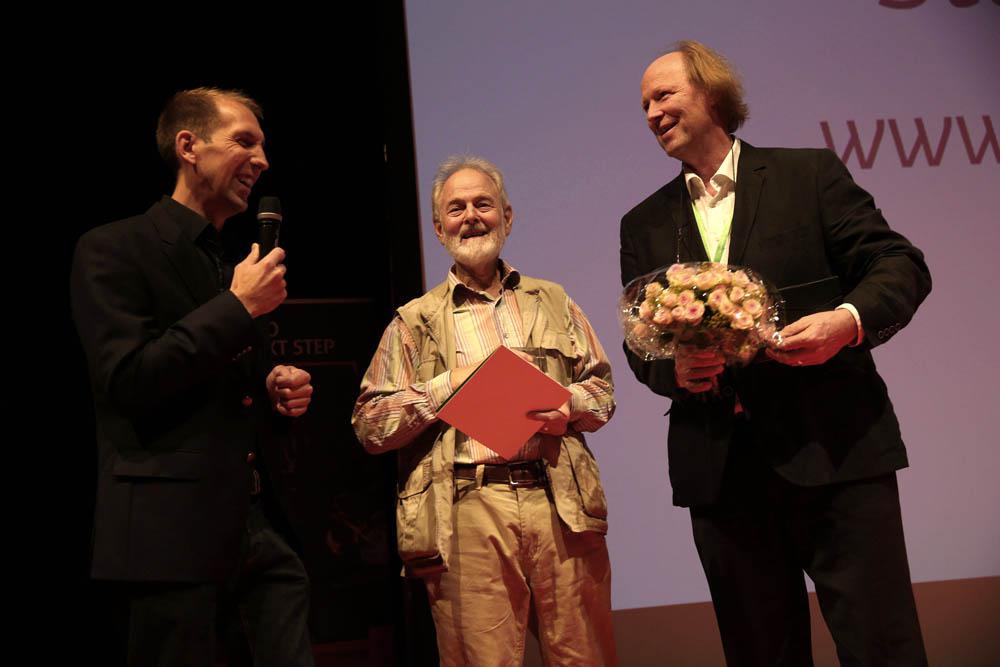 Within the framework of the international nature photography festival, the GDT honoured British photographer Stephen Dalton with the Fritz Steiniger Prize for his contribution to nature photography. The results of his experiments in high-speed flash photography and his subsequent publications were landmark events in the world of photography and caused a great stir worldwide.Stephen Dalton (GB)Stephen Dalton (born in 1937) has been enthusiastic about nature and photography already at a young age. After his degree he set out to combine these two passions in his professional life. In 1970 he started something completely new: photographing insects on the wing with absolute clarity. At this time digital photography was decades away, film speeds (for quality results) were limited to ISO 25 - 32, flash units were restricted to about 1/1000 second - far too slow for stopping insects, or birds for that matter. It was the solution of these problems that became his overriding obsession. Two years of experimentation resulted in perfecting techniques and highly specialised equipment, allowing him to capture movements that were far too rapid to be seen by the human eye, and ones never observed in such detail before. Stephen Dalton's images are much more than mere documentation; his work of fascinating intensity and striking beauty has set visual and artistic standards that are still valid today.Apart from his photographs being published in many books and exhibitions at home and abroad, one of his insect images was chosen to board NASA's Voyager 1 and 2, which have been travelling through and out of our solar system since 1977. By now Voyager 1 is some 20 billion kilometres away from Earth and carries the image, which is expected to last one billion years, as part of records conveying something of the science and culture of mankind to possible extra-terrestrial beings.Stephen Dalton lives with his wife in southwest England and still works in nature photography.www.stephendalton.co.ukProfessor Fritz SteinigerProfessor Fritz Steiniger was one of the founding fathers of the GDT, whose visions of a society for wildlife photography had significant influence during the formative years. It is in his memory that the GDT awards their most important prize for special contribution to nature photography at irregular intervals. It was first awarded to Herbert Erich Maas in 1986, who, in the course of years, was followed by Heinz Sielmann, Fritz Pölking, Horst Niesters, Frans Lanting, Klaus Nigge, Dietmar Nill, Winfried Wisniewski and Hannu Hautala.The GDT There is a society or association for wildlife and nature photography in almost every European country. In Germany this has been the Society of German Nature Photographers (GDT – Gesellschaft Deutscher Tierfotografen e.V.) since 1971. With manifold activities, the non-profit association is the leading organisation of nature photographers in Europe. Photographic topics are diverse ranging from classic wildlife images and landscape, plant and macro photography to abstract forms of nature photography. The GDT promotes authentic, unmanipulated images and focuses equally on aspects of natural history as well as artistic values. In addition to members from Germany, Europe and overseas, numerous sponsors from the photographic industry including many well-known camera manufacturers, specialist suppliers in nature photography, publishers and agencies, support the goals and the work of the GDT by their sponsor membership. In addition to the International Nature Photography Festival the GDT hosts an annual photo competition for their members as well as the open international competition GDT European Wildlife Photographer of the Year. Patron of the competition is Prof. Beate Jessel of the Federal Ministry for Nature Conservation. Information at www.gdtfoto.deGDT office/press relations Karen Korte Körnerstrasse 4 24103 Kiel Germanyphone: +49 (0)431-906 63 64 presse@gdtfoto.de

You can edit or delete your press release Fritz Steiniger Prize: GDT honours Stephen Dalton for pioneering work in the field of high-speed flash photography here

06-22-2016 | Politics, Law & Society
Achorage Lawyer
PRESS RELEASE FOR STEPHEN MERRILL, ATTORNEY
TRIAL ATTORNEY Anchorage Attorney Stephen Merrill in his five years of practice in Alaska has proven to be one of the better trial lawyers in the State. 1. A criminal court acquittal on one felony charge and two misdemeanor charges. ANCHORAGE SUPERIOR COURT 2. Business Law Trial with a 4k pretrial offer and a 22k verdict for the client plaintiff. ANCHORAGE DISTRICT COURT 3. Business Law Trial with a 14k pretrial offer and
03-09-2016 | Business, Economy, Finances, B …
Broker Educational Sales & Training, Inc.
BEST Congratulates Its New National Marketing Director, Stephen P. Clifford
Broker Educational Sales & Training, Inc. (BEST) congratulates its new National Marketing Director, Stephen P. Clifford. As the National Marketing Director, some of Steve’s responsibilities will include: - Meeting with potential new accounts and telling the “BEST” story - Build BEST’s list of clients and number of Super CE programs - Train the client’s instructors on how to deliver BEST’s programs - Work with client accounts to increase the number of annual Super CE programs
04-01-2011 | IT, New Media & Software
Managing Editor Inc.
MEI Appoints Stephen Arbour as Vice President of Technical Services
Jenkintown, PA (March 31, 2011) — Managing Editor Inc. (MEI), an Adobe premier development partner and a leading provider of software solutions for the publishing industry, today announced the appointment of Stephen Arbour as Vice President of Technical Services. The promotion represents a strategic consolidation of resources at MEI. In his new role, Arbour — formerly the company’s Senior Director of Software Operations — will oversee MEI’s Integration Services, Information Technology,
03-02-2011 | Fashion, Lifestyle, Trends
Bellagala
Stephen Geffre Joins Bellagala Staff of Minneapolis Wedding Photographers
ST. PAUL, MINN. March 2, 2011 – Bellagala is excited to introduce Stephen Geffre, studio lead photographer, as a new addition to their outstanding staff of Minneapolis wedding photographers. As a Minneapolis wedding photographer, Jeffre spends his time capturing the unique feeling of his clients’ wedding, not directing traffic or forcing poses with distant relatives. “Once the formal shots are out of the way, I seek to become invisible. As
06-07-2010 | Industry, Real Estate & Constr …
BluSky Marketing
Stephen George & Partners launch green reference guide
Leading architectural practice, Stephen George & Partners, who have a passionate interest in sustainable architecture, have just launched an easy to use and easy to understand guide on selecting sustainable building materials. The Stephen George & Partners Guide to Building Materials and the Environment is a comprehensive, practical and interactive guide. It was originally intended to help designers consider the environmental implications of commonly (and occasionally not-so-commonly) specified materials.
02-05-2009 | Arts & Culture
WILDE GALLERY
Cartoon - Exhibition by Stephen Andrews
Stephen Andrews was born 1956 in Sarnia, Ontario. He lives and works in Toronto. Cartoon was curated by Doina Popescu, Ryerson Photography Gallery and Research Centre, Ryerson University, Toronto, Canada Cartoon is an animated adaptation of a car commercial and is a companion piece to The Quick and the Dead another animation based on footage of two soldiers in Iraq. Together they provide two very different takes on the current political situation.
Comments about openPR
9 o'clock: discuss press release with client, 10 o'clock: submit release to openPR, within the briefest possible time release is published and displayed in a prominent place on openPR.de. I am thrilled!
Zehra Spindler, Calypso Now! - Communication Agency