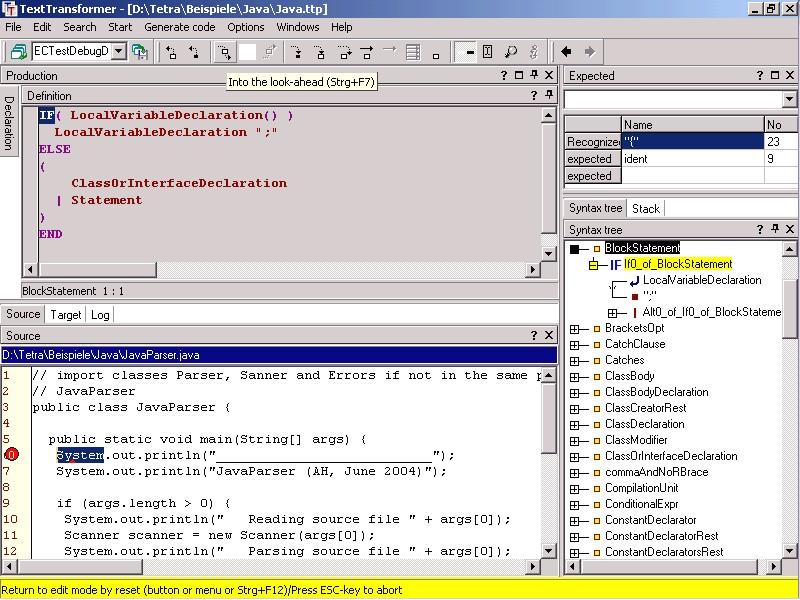 The possibilities for the visual analysis of texts have been extended to the look-ahead analysis in the TextTransformer 1.4. TextTransformer is a development environment for the analysis and automatic evaluation and remodelling of texts. At the analysis of a text disambiguation, i.e. the choice between alternative interpretations, can depend on sections of text which follow at later positions. E.g. the meaning of a letter can depend on the signature, or the existence of a semicolon can qualify the code being in front of it in a programming language. Such a look-ahead can be debugged now as well as it was possible till now only at the current position. A special button or shortcut starts look-ahead debugging, afterwards the same commands can be used to single step over or into productions, as in the mainstream debugger.Now it's also possible to step backwards in the debugger, from a breakpoint or error condition. This backtrace allows to find out how this state was reached, without restarting the parser, and eliminates the need for writing specialized test cases, which otherwise may be required to reproduce a certain error condition.These new debugging facilities were developed in connection with a big project carried out successfully: a parser for the programming language C++ has been built for the preparatorily translation of approx. 120000 lines of source code of a company software into Java code.Detlef Meyer-Eltz Burggarten 16 20535 Hamburg GERMANYTextTransformer is specialized on all kinds of text remodeling: text analysis, text extractions, text replacements and text conversion: e.g. log file analysis, data file conversions, source to source translations etc.

02-22-2010 | IT, New Media & Software
Dr. Detlef Meyer-Eltz
Delphi2Cpp 1.2.0: converts Delphi code for compilers like Visual C++ or gcc now …
The program Delphi2Cpp was made to convert Delphi code to C++. The extended C++ of the CBuilder compiler was the primary target of the first version of Delphi2Cpp, which was published three months ago. With the new update this limitation is overcome, because optionally Delphi properties can be eliminated now. The use of "properties" is a fundamental language feature of Delphi, that makes it difficult to translate it to C++. Only
11-19-2009 | IT, New Media & Software
Dr. Detlef Meyer-Eltz
Delphi2Cpp 1.0.0: Converter from Object-Pascal (Delphi) to C++
The program Delphi2Cpp just has been released, which helps to translate the proprietary programming language Object Pascal - also called Delphi - into the widespread programming language C++. Delphi2Cpp saves all purely mechanical syntactical substitutions and rearrangements of the code in which the largest portion of the translation consists. A lot of more complex translation steps are executed too. However, in most cases a manual post-processing of the produced code will
12-08-2008 | IT, New Media & Software
Dr. Detlef Meyer-Eltz
TextTransformer 1.6.0: conversion of binary files
With TextTransformer 1.6.0 easy development of programs for the processing of binary files is possible now. This is possible because source files can be shown now not only as normal text, but as a binary text and in hexadecimal form too. Binary files are frequently used for the compact storage of data and - opposed to text files - contain many characters which aren't shown in a normal editor. These data
06-03-2008 | IT, New Media & Software
Dr. Detlef Meyer-Eltz
Conversion of arbitrary file formats to XML
TextTransformer supports XML as target format in a special way now. XML is of an eminent importance as it is a widespread standard for the exchange of data between different programs and systems. Moreover, further transformations can be done with XML files by means of XSLT. Therefore it is desirable to be able, as simply as possible, to convert arbitrary file formats to XML. With TextTransformer parsers (text-analyzer) can be

05-25-2021 | IT, New Media & Software
Macrosoft Inc
Visual FoxPro Technology Survey Results
Parsippany, NJ, May 25, 2021 - Macrosoft is a leader in providing professional technical services for both ongoing support of Visual FoxPro applications and migration to modern technology platforms. As a result of this expertise, Macrosoft conducted an industry best practices survey during March 2021. 366 individuals participated in the 21-question on-line survey. Based on the broad participation it is believed that the results are highly accurate and represent
03-18-2020 | Industry, Real Estate & Constr …
Elesa UK
Elesa standard components for Audio Visual Equipment
High quality cameras and projectors often consist of complex equipment that requires rugged longevity due to repetitive mounting and usage. Elesa are pleased to offer a selection of standard components to aid manufacturers of this equipment and their ancillary mounting systems. In particular, clamping, indexing and levelling are core elements in the successful operation of AV equipment, which are directly addressed by the Elesa range. Clamping operations are facilitated by their GN
08-23-2017 | Industry, Real Estate & Constr …
AI
Fresh Visual Perspective in Marketing
COLUMBIA STATION, OHIO – Exciting technology is being delivered by a Northeast Ohio firm in assisting companies with their visual marketing, work processes, project management, and time management by capturing necessary and effective images, views, angles, and data through digital aerial photography and videography created by FAA certified remote piloting. Founded by the husband and wife team of Ian and Betty Vrcek, Altitude Imaging LLC is serving Ohio and
02-16-2017 | IT, New Media & Software
MarketResearchReports.Biz
Global Visual Analytics Market 2016-2020
MarketResearchReports.Biz presents this most up-to-date research on "Global Visual Analytics Market 2016-2020" Description Visual analytics is a form of data analysis that helps in problem solving by displaying the data in a graphical and interactive way. Visual analytics solutions are used to understand the significance of data in visual context with the help of data visualization tools and technologies. Data visualization tools are not limited to standard charts and excel spreadsheets. The
02-24-2016 | Business, Economy, Finances, B …
TargetGov
Get Visual. Win Contracts.
Government Contracting Institute—Linthicum Heights, MD—February 24, 2016— On Tuesday, March 1, the Government Contracting Institute (Institute) presents an in-person only course entitled, “Billion Dollar Proposal & Presentation Graphics” at TargetGov headquarters in Linthicum Heights, MD. This unique in-person hands-on course trains people who have no graphics background to create visually communicative, compelling graphics that will help their companies win Government contracts—without using expensive, complicated software. Qualified companies who do not
11-08-2011 | Health & Medicine
Medos Medizintechnik
Medos Medizintechnik AG gets a visual makeover
The changes that came with the company's newly-defined strategic focus are now clearly visible for the world to see. Medos presented its complete design makeover for the first time at the 25th Annual European Congress of Cardiac and Thoracic Surgeons (EACTS) in Lisbon in early October. The redesign is a logical consequence after the company’s repositioning. "We want Medos’ new, clear strategy to be reflected in our corporate design,"
Comments about openPR
OpenPR ist the nicest and most clearly laid out PR platform I have seen to this day. The press releases are displayed very nicely and clearly and without any unnecessary frills. The updates are fast and the finished release looks appealing and is clearly legible. Even with 16 years of experience one discovers new things from time to time. Congratulations!
Gabriele Ketterl, Director Marketing & PR, Menads