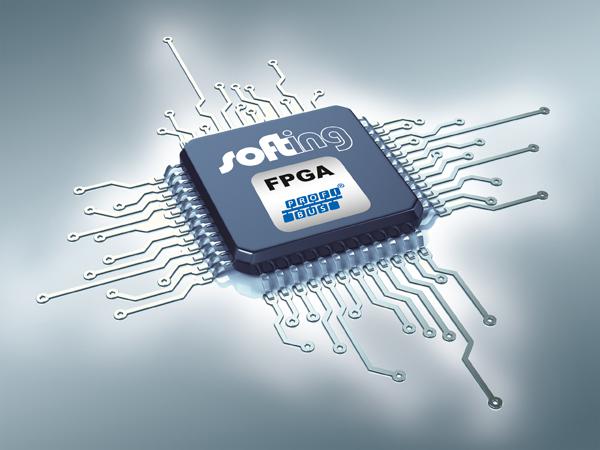 A complete PROFIBUS field device built in an FPGA

Haar, April, 29, 2015 – Softing Industrial Automation is introducing a new PROFIBUS Slave subsystem that can be fully loaded into an FPGA. The solution consists of a VHDL-designed PROFIBUS controller and processor on which runs the entire protocol software.
With Softing's new PROFIBUS Slave architecture, device developers can take advantage of a subsystem which is immediately executable, since the protocol software has already been ported to the processor. The integration task is limited to the realization of the device application, of which an example is included as source code.
Very compact solutions can be obtained when the application software is housed in the FPGA, for example on another loadable processor. But it is also possible to connect the PROFIBUS subsystem to an external microcontroller.
According to Christian Braeutigam, Product Manager Industrial Communication at Softing Industrial Automation, the flexibility of the FPGA technology allows optimum adaptation to the task at hand. “The device manufacturer can choose type and size of the FPGA in a way that it fits the PROFIBUS DP Slave as well as his application-specific logic and, where appropriate, the application processor. Since the PROFIBUS controller is embodied as IP core, there is no dependence on a specific bus controller ASIC.”
The PROFIBUS Slave subsystem supports DP-V0 and DP-V1 and is available for Altera FPGA Cyclone-Series III, IV, V and SoC. Manufacturers who need to support further communication protocols such as PROFINET, EtherNet/IP, EtherCAT, Ethernet POWERLINK or Modbus TCP with their devices, particularly benefit from Softing’s FPGA approach, since the available communication subsystems all have the same application interface and thus can be easily replaced.

About Softing Industrial Automation
Softing Industrial Automation is a world leading provider of industrial communication products and technologies for manufacturing and process automation. The company’s products and services are tailored to the requirements of system integrators, device vendors, machine and equipment manufacturers or end users and are known for their ease of use and functional advantages. For more details: http://industrial.softing.com