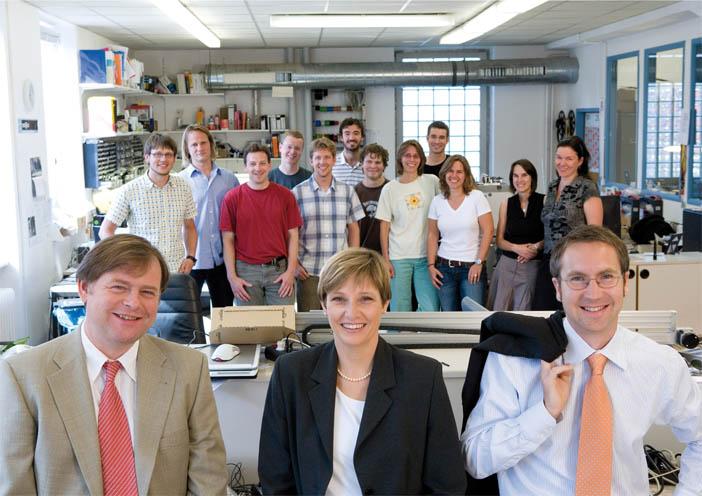 Munich, Oct 11, 2007: The planar patch clamp technology used in a family of automated electrophysiology products developed and marketed by Nanion Technologies GmbH in Munich, Germany, is among four technological and scientific innovations that have been nominated for this year's Deutscher Zukunftspreis (German Future Award). The nomination of the project "Small Holes – Big Effects: Cell Physiology in a Chip Format" represented by Nanion's CEO, Niels Fertig as well as CSO Andrea Brüggemann and Chairman of the Board Jan C. Behrends (University of Freiburg) was today announced in a press conference by Dr. Gert Haller, Secretary of State in the Office of the Federal President in Berlin. With the Deutscher Zukunftspreis, awarded once a year, the German Federal President honours outstanding achievements in Science and Technology. In their nominations for Germany's most prestigious research award along with the Leibniz Prize, the Jury also appraises the commercial and employment-creation potential of scientific innovations. The prize will be bestowed on one of the four nominated teams by Federal President Horst Köhler on December 6. Links: http://www.nanion.de http://www.deutscher-zukunftspreis.de/newsite/nominierte/index.shtml Nanion Technologies Erzgiessereistr. 4 80335 München Germany phone: +4989218997970 fax: +4989218997960 info@nanion.de Nanion Technologies is a start-up company founded in 2002 by a team of researchers (Dr. Niels Fertig, Dr. Robert H. Blick and Dr. Jan C. Behrends) from the Center for Nanoscience of the University of Munich and the company is run by the management team consisting of Dr. Niels Fertig (CEO), Dr. Andrea Brüggemann (CSO) and Michael George (CTO). Nanion has developed and successfully marketed the Port-a-Patch, a miniaturized patch clamp device, and, since 2006, the Patchliner, a fully automated higher throughput patch-clamp robot. Both devices use the NPC- patch clamp chips which are based on the research which has now been nominated for the award. They replace the traditional glass pipette used in the technique of patch clamping (E. Neher, B. Sakmann, Nobel Prize 1991) and enable automated and higher-throughput testing of potentially ion-channel active substances.