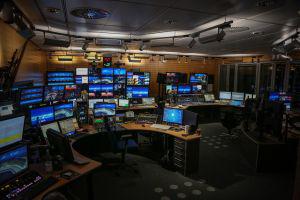 The first transmission from the new ARD “Tagesschau” studio (Germany’s most prominent news program) took place April 2014 after conversion and modernisation work that had taken a number of months. The new studio sets new standards in audio-visual communication of information – with the most impressive feature being the 18 metre wide back projection wall onto which video material can be projected in real time during the programmes. This modernisation also included converting the whole production to HD quality. A key component of the new technology is L-S-B Broadcast Technologies’ VSM System, which assumes control of several tasks in the new studio complex. VSM is the centralised control system for video and audio routers and interfaces, IMDs and UMDs, studio automation, servers as well as the tally system. The system was installed and configured in situ by MCI Hamburg.The ARD-complex consists of a large studio and two control rooms and the VSM controls all the background switching, including both on-air switching and the tally in addition to switching the audio and video routers. The VSM also controls all the signal routing in case of critical equipment failure. Particular importance was attached to the system’s redundancy, whereby VSM controls the redundancy switchover between the two control rooms.  For each control room an Evertz (288x288 frame) video router is in use. More than 130 Penta displays (control of the input switching and screensaver on/off through VSM) as well as 24 multiviewers, whose UMDs and IMDs are controlled by the VSM, are available.With regards to video the VSM system controls one Sony MVS 7000 production switcher in each control room and has access to, amongst other things, Tally, Label or aux-bus-routing. Tally appears in red or yellow with the current production team seeing itself marked in red (production team A), and the other production team at the time (production team B) in yellow. If production team A is shown in yellow it means it is ‘on-air’. In the case of the Stagetec Nexus audio routers and mixers VSM has direct access to DSP parameters adjusting microphone input equalizers and switching crosspoints via the Gadget Server 5 which is incorporated in the VSM system. The Lynx modular system is also connected via VSM and all frame synchronizer parameters, audio delays etc. are available to the VSM for circuit dependent control.The VSM’s vLayer function enables the Mosart automation to have full access to controlling the video routers. Management of the active resources within the system takes place via VSM and is communicated to the three Mosart automation systems. VSM is also used for layout design and labelling of the 24 multiviewers.   The news presenters’ controls have been made especially for this particular studio. They are built into the desk for the presenters’ use and are controlled by means of 14 VSM GPI units (19”). They also include special foot switches for the studio presenters to preselect the material to be run in the program.The VSM used in the ARD news studio is designed to be redundant and works on a server cluster with 3 servers in a master-master structure. This provides complete failure safety and maximum redundancy. In addition to 5 vsmPanels, 18 web panels and 47 VSM hardware panels are in use.Implementation and configuration of the system and workflows were carried out by system integrator Studio Hamburg MCI in situ.Details of the VSM system in the ARD news studio: 3 VSM servers in cluster configuration 5 vsmPanels 18 web panels 47 19“ VSM hardware panels 14 GPI boxes (19“)You can find more information about L-S-B and MCI at www.l-s.b.de and www.studio-hamburg.de/.L-S-B Broadcast Technologies GmbH, Wiesbaden (Germany), is the leading manufacturer of control systems for radio and television production. The company’s core product is the IP-based Virtual Studio Manager (VSM), a universal control system. As a single-source solution, VSM works independently of any single manufacturer and thus represents a flexible and powerful answer to technical challenges in the fields of production and broadcasting. Founded in 2003, L-S-B Broadcast Technologies can draw on an excellent worldwide sales network. A staff of 35 at Head Office in Wiesbaden is responsible for management, project implementation, services and software and hardware development. Further information can be found at www.l-s-b.de.Andreas Höflich - Public Relations - Phone +49 611 262390-16 Fax +49 611 262390-98 E-Mail: andreas.hoeflich@l-s-b.de www.l-s-b.deL-S-B Broadcast Technologies GmbH Konrad-Adenauer-Ring 13-15 65187 Wiesbaden, Germany