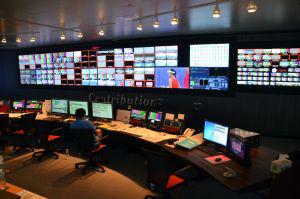 VSM in the IBC during Asian Games

September 19th the Asian Games in South Korean Incheon opened with a glamourous ceremony. Next to the Olympic Games, the Asian Games are the largest multi-type sport event in the world. Until October 4th athletes rival about medals in 439 events and 36 disciplines. More than a billion people are in full cry after the Games via television and other media. The VSM-System by German-based company L-S-B Broadcast Technologies GmbH takes on a crucial part in the broadcast infrastructure. During the Asian Games VSM is working as the main control system in several OB-Vans as well as in the International Broadcast Centre (IBC).Within the IBC VSM is working as the overall control system with access to the routers. Furthermore VSM is utilized for control and monitoring of modular equipment as well as scheduling of the 45 distribution channels for the whole IBC facility. During production 50 VSM hardware panels and 10 software panel GUIs are in place in the IBC.Additionally transmission schedule of the 45 distribution channels and status monitoring of the main feed signal changeover units within the VSM GUIs are displayed on large monitors in the CDT (Contribution-Distribution-Transmission) room. The CDT room serves as the most important control room within the IBC facility. It is used for gathering, quality control and distribution of all signals to transmission lines and other users.VSM furthermore is implemented in the KBS production facility within the IBC, taking care of video- and audio-router control, Tally management and modular control and monitoring. Here 36 VSM hardware panels plus software panel are in use. During the Asian Games in total there are 9 VSM systems active in the IBC facilities and OB Vans of Korean Broadcasters KBS, MBC and EBS.Throughout the Asian Games VSM once more proves its flexibility. The system can be configured individually to the customer’s needs and areas of application – from OB Vans to complex workflows within a Master Control Room. Especially in mission-critical environments as the control room in the IBC users can depend on VSM’s reliability.You will find more information on VSM and the Asian Games at: www.l-s-b.de or www.incheon2014ag.org.L-S-B Broadcast Technologies GmbH, Wiesbaden (Germany), is the leading manufacturer of control systems for radio and television production. The company’s core product is the IP-based Virtual Studio Manager (VSM), a universal control system. As a single-source solution, VSM works independently of any single manufacturer and thus represents a flexible and powerful answer to technical challenges in the fields of production and broadcasting. Founded in 2003, L-S-B Broadcast Technologies can draw on an excellent worldwide sales network. A staff of 35 at Head Office in Wiesbaden is responsible for management, project implementation, services and software and hardware development. Further information can be found at www.l-s-b.de.Andreas Höflich - Public Relations - Phone +49 611 262390-16 Fax +49 611 262390-98 E-Mail: andreas.hoeflich@l-s-b.de www.l-s-b.de L-S-B Broadcast Technologies GmbH Konrad-Adenauer-Ring 13-15 65187 Wiesbaden, Germany