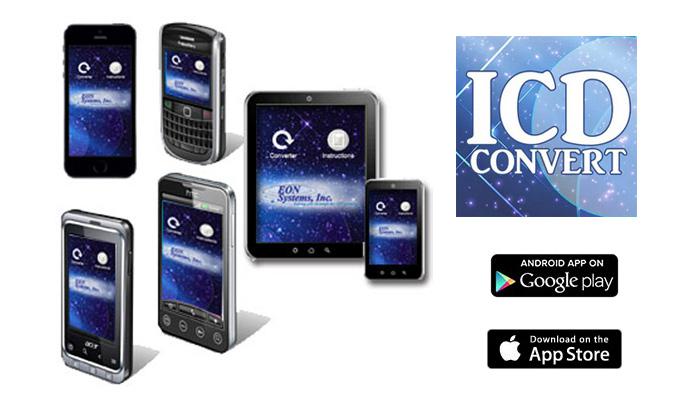 Available on Android®, iPhone® and iPad®

Clearwater, FL- EON Systems, Inc., the provider of The Digital Office™, a complete software suite for healthcare providers, is excited to announce the launch of its ICD Converter App. The company’s new product, which launched on October 31st, 2014, is available on all Android®, iPad® and iPhone® products. EON’s ICD Converter app features both ICD-9 to ICD-10 conversion and ICD-10 to ICD-9 conversion. In addition to being able to cross convert the codes, users will also be able to type in keywords to receive the corresponding ICD-9 and ICD-10 codes for the search term entered. One of the functions that makes EON’s ICD Converter app unique is the feature that will warn the user of the different codes available for different variations of a condition; such as the right/left specificity needed with certain codes or the 7th character needed for an injury or fracture code. Another function unique to EON’s app is the ability for the user to search by procedure code or diagnosis code. When asked why the company is releasing the ICD Converter app, EON Systems President, Ken Thomas, said the following “The ICD-10 conversion is an enormous undertaking for all of us in the healthcare industry.” He added, “With the prevalence of smartphones and tablets today, we believed it would be advantageous to create a tool that might help make this transition to ICD-10 a bit easier, not just for EON Systems’ clients, but for anyone in the healthcare industry that could benefit from the features and functionalities offered in the ICD Converter app.”The move to ICD-10 is a mandatory part of the healthcare reforms that the United States government has been pushing forward. Healthcare providers are currently expected to switch from ICD-9 to ICD-10 codes starting on October 1, 2015. According to Blue Cross Blue Shield of North Dakota, “ICD-9 has just over 14,000 diagnosis codes and almost 4,000 procedural codes. In contrast, ICD-10 contains over 68,000 diagnosis codes (clinical modification codes) and over 72,000 procedural codes.” The more numerous codes allow for greater specificity and enable reports to be more detailed when observing a patient. ICD-10 codes classify the severity of an injury or condition, location on the body and how it happened. Healthcare providers will have to be proactive if they want to be effectively prepared for the switch to ICD-10. “Potential penalties, revenue cycle errors and economic inefficiencies will cost more in the long term than preparing for ICD-10 now” said Executive Insights writer and research analyst, Carrie Paykoc. “Decision makers must prioritize clinical documentation in their ICD-10 adoption strategy or put their organization at risk. Being reactive to this mandated legislature will inevitably cause cash shortfalls later.” The ICD Converter app will enable providers to be better prepared for the switch to ICD-10. Rather than memorizing or studying codes, healthcare providers can type in the code they want translated on their phone or tablet and receive instant feedback. The app is available for Android devices in the Google Play Store™, for iPad & iPhone devices in the App Store℠, or via desktop PC through the membership site convert10.com. EON Systems, Inc. is the developer of The Digital Office™, a comprehensive practice management solution for healthcare providers. A leader in innovation in the healthcare industry for 26 years and counting, EON Systems will be releasing a series of new products and services for the healthcare management industry. For more information on new products and services in the coming months, please contact EON Systems via their website: eonsystemsinc.com.EON Systems, Inc. was founded in July, 1988 in Bellingham, Washington. EON is the developer of The Digital Office which includes three components: The Practice Solution (TPS), the nation’s premier Office Management and Billing Software for the Chiropractic, Physical Therapy and Multi-disciplinary industries, Documentor, state of the art noting and EMR documentation software package and Document Solution, document storage and management, including digital X-ray viewing.620 Lakeview Road Clearwater, FL 33760-3336