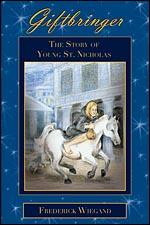 Christian author Frederick Wiegand has signed an exclusive agent agreement with Castles Information Network of Vacaville. Castles will handle all negotiations, contracts and publicity for Wiegand. Castles president James Downey stated in a press release, "We're pleased to be able to work with Mr. Wiegand on Giftbringer and his future projects. This contract takes Castles business services unit in a whole new direction, complementing our existing web design and consulting services. Castles created the web site www.giftbringer.net for the author and one thing led to another." Giftbringer, the story of Young St. Nicholas was published by Christian publisher Tate Publishing in late 2004 - and is the first in a series of books to be published on the life of St. Nicholas. "We're excited about the potential of this book becoming a movie in the near future. Mr. Wiegand wrote the book with a "cinematic" eye and a clear picture of how it would look and play on the big screen," Downey said. Giftbringer is a special book that tells the story of young St. Nicholas from a historical standpoint, yet presents it in novel format, all the while injecting the reader with a subtle underpinning of Christian values. This is a beautifully written novel that will grip the attention of anyone who reads it. It covers the story of St. Nicholas' childhood, his journey to understanding what is most important in life, and how he became known as 'the giftbringer.' The entire story is laced with sound Christian principles and values (most of which are reflected in the lessons young Nicholas learns as he goes through life.) Downey said that he and Wiegand are collaborating on a leader study guide so the book can be used in conjunction with a bible study. Frederick Wiegand is a teacher and semi-professional actor in Fairfield, California. A native of Seattle, he holds two Bachelor of Arts degrees from the University of Washington and a Master of Science degree in Special Education from National University. Wiegand also directs and performs in plays or musicals at church and with local theater organizations. He enjoys traveling and researching various countries and cultures. Wiegand has become an expert on the life and times of St. Nicholas. For additional information, visit www.giftbringer.net or contact Downey at 707-455-3401. James E. Downey President/CEO Castles Information Network, Inc. 301 Alamo Drive Suite H Vacaville, CA 95688 (707) 455-3401 (800) 847-6443 Connecting You To The World Dial-up, Wireless, DSL, T1 Web Design, Hosting and Business Services Visit us at www.castles.co Connecting You To The World Dial-up, Wireless, DSL, T1 Web Design, Hosting and Business Services

03-11-2019 | Arts & Culture
PR for Revelation
“The ABC of Revelation and the Beast” by Nicholas Brand
ISBN #978-1543493139 “The ABC of Revelation and the Beast” by Nicholas Brand This newly-published book unwraps some of perennial mysteries of the Biblical Revelation About the Book: This book aims to solve some of the great enigmas of the last book of the Bible, which has fascinated and puzzled Christians for centuries. The interpretation contends that the USSR is the beast and reveals the meaning and identity of the seven heads and ten
06-18-2018 | Business, Economy, Finances, B …
WISE GUY RESEARCH CONSULTANTS PVT LTD
Global Titanium Bicycles Market 2018 Industry Key Players: Van Nicholas, Lynskey …
Titanium Bicycles Market: WiseGuyReports.com adds “Titanium Bicycles Market 2018 Global Analysis, Growth, Trends and Opportunities Research Report Forecasting to 2025”reports to its database. Executive Summary This report studies the global Titanium Bicycles market status and forecast, categorizes the global Titanium Bicycles market size (value & volume) by key players, type, application, and region. This report focuses on the top players in North America, Europe, Asia-Pacific, South America, and Middle East & Africa. The major
10-11-2017 | Business, Economy, Finances, B …
WiseGuyResearch Consultants Pvt Ltd
Global Titanium Bicycles Market 2017: Van Nicholas, Lynskey, Litespeed, Moots Cy …
Titanium Bicycles Market Analysis And Forecast This report studies Titanium Bicycles in Global market, especially in North America, China, Europe, Southeast Asia, Japan and India, with production, revenue, consumption, import and export in these regions, from 2012 to 2016, and forecast to 2022. This report focuses on top manufacturers in global market, with production, price, revenue and market share for each manufacturer, covering  Van Nicholas  Lynskey  Litespeed  Moots Cycles  Seven  ... On the basis of product, this report displays the
09-18-2017 | Sports
QY Market Insights
Global Titanium Bikes Market 2017 by Key Players - Van Nicholas, Lynskey, Litesp …
Geographically, this report is segmented into several key Regions, with production, consumption, revenue (million USD), market share and growth rate of Titanium Bikes in these regions, from 2012 to 2022 (forecast), covering North America Europe China Japan Southeast Asia India Get Sample report @ https://www.qymarketinsights.com/report-detail/1151/request-sample Global Titanium Bikes market competition by top manufacturers, with production, price, revenue (value) and market share for each manufacturer; the top players including Van Nicholas Lynskey Litespeed Moots Cycles Seven Get free access @ https://goo.gl/VXrUHB On the basis of product,
08-11-2017 | Advertising, Media Consulting, …
Spire Market Research
Knee Pad Global Market Outlook 2017-2022 KP Industries, Ergodyne, PullR Holdings …
Knee Pad Market Research Report A market study ” Global Knee Pad Market ” examines the performance of the Knee Pad market Size 2017. It encloses an in-depth Research of the Knee Pad market state and the competitive landscape globally. This report analyzes the potential of Knee Pad market in the present and the future prospects from various angles in detail. Request For Sample Report: http://bit.ly/2vT4rF7 The Global Knee Pad Market 2017
02-28-2012 | Arts & Culture
Agora Gallery
Nicholas Vitale: Nature Itself at Agora Gallery
Nicholas Vitale charts new ground where the like-minded Fauvists and psychedelic artists of the 1960s left off. Using gouache or oil paint, he paints still lifes and landscapes of the rugged natural regions of the western United States. The surface of each canvas is active with texture, while the images themselves exude energy through the artist's intense use of unadulterated complementary colors. If a faraway mountain range seems to have
Comments about openPR
Your portal is fast, simple, and easy to use. Others may have more functions but they also demand more editing time, you have to preformat the text in order to achieve a good result etc. I think openPR is really fantastic!
Andreas Knepper, wallmedien AG