High-speed screwing system from Engmatec at the Motek 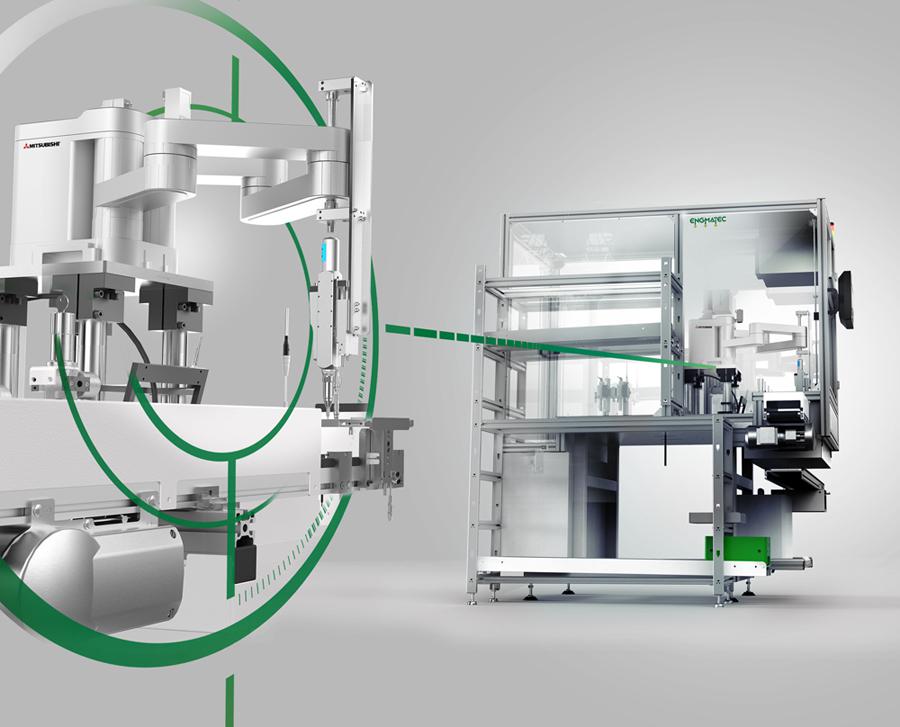 Radolfzell, Germany, 02.09.2014At this year’s Motek trade fair to be held from 6-9 October 2014 in Stuttgart, Mitsubishi Electric together with Engmatec GmbH will be presenting a high-speed screwing station for inline operation as part of an assembly line. Within the system, a Mitsubishi Electric dual-arm SCARA robot from the RP series performs the handling and tightening of the screws using a vacuum suction unit. The compact system can handle ten screws in just 18 seconds (hall 7, stand 7210). The Engmatec system uses a screwing method based on the pick-and-place principle incorporating vacuum suction units. It also includes a Mitsubishi Electric RP-5ADH robot with corresponding CR1D robot controller. The robot picks up the screws to be handled and tightens them at any position on a switch panel. Thomas Lang, MD of Engmatec GmbH, explains: “Compared to conventional handling where the screw is inserted into the mouthpiece of the screwdriver, the Mitsubishi Electric robot and the integrated vacuum suction cup enable us to speed up the screwing process considerably. The 4-axis robot can also be integrated and programmed very easily.” The screwing system has a cycle time of approximately 0.8 seconds which means that, including handling, it can handle ten screws in 18 seconds. The system controller also accepts the tightening torque and angle of rotation data for each screw. In the application presented here, the Torx IP 8 screws used have a tightening torque of 66 newton centimetres, for example.What is more, the screwing system is not just fast but also extremely compact. Thomas Lang explains: “We use a vacuum cup so that the robot can screw directly to the wall, thus combining the advantages of speed and technical added value for the customer. The dual-arm robot enables us to create a space-saving assembly while guaranteeing optimum performance at the same time.” The RP-series dual-arm SCARA robots are high-performance systems which have been specially designed for micro-handling during the production of watches, mobile telephone or hearing aids, for example. The RP-5ADH is suitable for handling tasks requiring a load capacity of up to five kilograms and operates with a repetition accuracy of ± 0.01 millimetres in directions x, y and z.Engmatec designs and builds test equipment and assembly systems for worldwide use. Its USP is the way it combines automatic or manual assembly processes with integrated end-of-line test technology. “We use Mitsubishi Electric robots as standard elements in our systems,” says Thomas Lang. “The system that is to be presented at Motek is a customer project that will be supplied to Mexico for a large automotive supplier. Speed, precision and longevity are essential in that industry in particular.”Motek is due to take place from 6-9 October 2014 in Stuttgart. The international trade fair is the world’s leading exhibition for production and assembly automation, feeding technology and material flow systems, rationalisation through handling technology and industrial handling. Mitsubishi Electric will be on stand 7210 in hall 7.About ENGMATEC ENGMATEC GmbH designs and builds test equipment and assembly systems for worldwide use. Its USP is the way it combines automatic or manual assembly processes with integrated end-of-line test technology. Its portfolio includes the automation of production processes from assembly to packaging. Depending on the task, it can develop production systems as manual workstations, rotary indexing tables and linked standard cells or complete, highly productive inline production systems. Its measuring and test technology division provides standard equipment such as test adapters, test connectors and inline test systems but can also design user-specific test systems for use in special-purpose machine manufacturing. It can provide the right solution for tasks ranging from circuit board testing and the testing of simple modules to complete solutions for complex test tasks. From design to final assembly, everything is carried out in-house.About Mitsubishi Electric With over 90 years of experience in providing reliable, high-quality products to both corporate clients and general consumers all over the world, Mitsubishi Electric Corporation is a recognized world leader in the manufacture, marketing and sales of electrical and electronic equipment used in information processing and communications, space development and satellite communications, consumer electronics, industrial technology, as well as in products for the energy sector, water and waste water, transportation and building equipment. With around 124.000 employees the company recorded consolidated group sales of 39,3 billion US Dollar* in the fiscal year ended March 31, 2014. Our sales offices, research & development centres and manufacturing plants are located in over 30 countries. Mitsubishi Electric Europe B.V., Factory Automation European Business Group (FA-EBG) has its European headquarters in Ratingen near Dusseldorf, Germany. It is a part of Mitsubishi Electric Europe B.V., a wholly owned subsidiary of Mitsubishi Electric Corporation, Japan. The role of FA-EBG is to manage sales, service and support across its network of local branches and distributors throughout the EMEA region. *Exchange rate 103 Yen = 1 US Dollar, Stand 31.3.2014 (Source: Tokyo Foreign Exchange Market)ENGMATEC GmbH Fritz Reichle Ring 5 78315 Radolfzell Tel. +49 / 7732 / 9998-0 Fax +49 / 7732 / 9998-88 http://www.engmatec.comPresscontact S. Vormbaum

11-04-2019 | Industry, Real Estate & Constr …
ENGMATEC GmbH
Board handling with AGV at productronica
At this year's productronica in Munich, the automation specialist ENGMATEC presents a test line with test handler and board handling. This time a 2-fold loader/unloader module will be used for handling the PCB magazines. The board handling module has a corresponding interface to be supplied with magazines via a Automated Guided Vehicle (AGV). Loading and unloading takes place autonomously by the AGV. In the trade fair constellation, the control of
03-21-2014 | Industry, Real Estate & Constr …
ENGMATEC GmbH
ENGMATEC at APEX Expo - test system with wireless interface
For the first time ENGMATEC will be represented this year at a trade fair in the USA. In cooperation with Landrex Technologies the German company will exhibit at the APEX Expo, the premier event for the electronic industry. The technical conference and exhibition will be held from 25 to 27 March 2014 at the Mandalay Bay Resort & Convention Center, Las Vegas. Thousands of industry professionals from more than 50 countries
01-29-2013 | Industry, Real Estate & Constr …
ENGMATEC GmbH
Engmatec GmbH expands its management
On October 1, 2012, Thomas Lang was appointed to the management of ENGMATEC GmbH. Thomas Lang supports Josef Engelmann of the management board and is, along with Maria Engelmann, a shareholder of ENGMATEC GmbH. He is responsible for the areas sales, project planning and control engineering. The specialists for test engineering and automation from Lake Constance thus set the course for a successful future. They send a clear signal for the strategic
12-14-2012 | Industry, Real Estate & Constr …
ENGMATEC GmbH
New testplug for SATA interfaces from ENGMATEC
For testing eSATA interfaces specially designed test plugs are available from ENGMATEC in Germany. Serial-ATA, short SATA is a worldwide established interface for hard disks and interchangeable data mediums. End-of-line testing of electronic equipment is becoming increasingly significant as an important component of modern testing strategies. SATA interfaces are especially used in the consumer and entertainment electronics and also gets more important in the fields of automotive and industrial electronics. Industrial-strength test