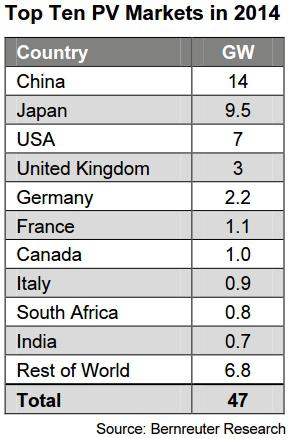 Bernreuter Research predicts short-term increase followed by downtrendWürzburg (Germany), July 10, 2014 – Rising demand in China and the delayed ramp-up of new production capacities will drive up the polysilicon price in the third quarter, according to the latest analysis made by polysilicon market research firm Bernreuter Research."We expect the spot price to climb up to US$23/kg from the current $21/kg before it will drop to a range of $18 to $20/kg by the end of 2014," predicts Johannes Bernreuter, head of Bernreuter Research and author of the polysilicon market report The 2014 Who’s Who of Solar Silicon Production.Originally, polysilicon projects with a total capacity of 66,000 metric tons (MT) were scheduled to come on stream in 2014 or even earlier. All of them have experienced delays: - The new plant of Hanwha Chemical in South Korea started operation with an annual capacity of 10,000 MT in late 2013, but is facing difficulties in ramping up capacity. - The first 6,200 MT phase of Tokuyama Corporation’s new facility in Malaysia, which is designed to produce electronic-grade polysilicon for the semiconductor industry, has encountered problems with equipment and consequently suspended trial operation. While the second 13,800 MT phase only needs to meet the less demanding specifications for solar grade, it remains to be seen whether it will start up production in the third quarter as announced. - SMP, a joint venture of SunEdison with Samsung Fine Chemicals in South Korea, has postponed the start-up of its 10,000 MT plant, which uses fluidized bed reactor (FBR) technology, to the second half of 2014; the same happened to the first 10,000 MT phase of the 25,000 MT FBR plant of Chinese market leader GCL-Poly Energy Holdings. As both companies are introducing new technology generations for the FBR process, which is difficult to control anyway, further delays during ramp-up are likely. - Although Chinese producer Daqo New Energy is planning to complete its expansion from 6,150 to 12,150 MT by the end of 2014, ramp-up will only begin in 2015. - The 10,000 MT debottlenecking project of OCI in South Korea will come on line as late as the third quarter of 2015."We assume that only 10,000 to 15,000 MT of the new capacities will become effective by the end of 2014," says Bernreuter. "Hence, oversupply will not be an issue this year, but return in 2015."Development of the polysilicon price will depend on demand from the photovoltaics (PV) industry. The bottom-up scenario of Bernreuter Research for new PV installations in 2014 currently stands at 47 GW (see table), assuming a strong hike in China in the second half of the year. While this would mean an increase of 22% over 38.5 GW in 2013, leading solar module suppliers project an average shipment growth of 30%, which would result in new installations of even 50 GW. In the lower case, the polysilicon spot price would drop to approx. $18/kg by the end of the year whereas it would come closer to $20/kg in the higher case. "Beginning in late 2014, prices will be on the downtrend again," concludes Bernreuter.More details on the polysilicon, solar and semiconductor markets are provided in The 2014 Who’s Who of Solar Silicon Production. The 124-page report contains forecasts on supply, demand, prices and manufacturing costs of polysilicon through 2017 as well as the latest company and technology developments. For more information on the report, please go to: http://www.bernreuter.com/en/shop/polysilicon-market-reports/2014-edition/report-details.htmlAbout Bernreuter ResearchBernreuter Research was founded in 2008 by Johannes Bernreuter, one of the most reputable photovoltaic journalists in Germany, to publish global polysilicon market reports. As early as 2001, Bernreuter authored his first analysis of an upcoming polysilicon bottleneck and new production processes. Since the premiere edition in 2010, the Who’s Who of Solar Silicon Production series has gained a reputation of providing the most comprehensive and accurate polysilicon reports on the market.Press Contact: Bernreuter Research - Polysilicon Market Reports Huttenstr. 10, 97072 Würzburg, GermanyYour Contact Partner: Johannes Bernreuter, Company Head Phone: +49/931/784 77 81 E-mail: info@bernreuter.com

07-11-2022 | Advertising, Media Consulting, …
Ken Research
Market Research Subscription Model | Market Research Report Subscription: Ken Re …
The top-notch membership platform of Dossier 360 gives an admittance to more than 30,000 corporates repost which liberally cover the attributes including Company Overview, Financials, Growth Plans, Funding, Operative Performance, Team Hierarchy and Headcount, Strength and Weakness and key vital Decisions. Though, the Ken Research is a functional aggregator and backer of the market insight, value and economy reports transitionally the globe. We effectively approvals the business knowledge and very
05-19-2022 | Advertising, Media Consulting, …
Ken Research
Education Industry Research and Market Research Reports - Ken Research
Higher education, also well-known as post-secondary education, tertiary education, is a non-compulsory final stage of formal learning occurring after the completion of secondary education. It comprises of all post-secondary education, training, and research guidance at the education institutions that are authorized as institutions of higher education by state authorities. Higher education is distributed at various educational institutes such as universities, academies, colleges, seminaries, and institutes of the technology as well
07-30-2021 | Advertising, Media Consulting, …
Ken Research Pvt Ltd
Business Research Company, Market Research Company, Top B2B Market Research Comp …
At Ken Research, the market research is obtainable as a service to sustenance any company, service provider, individual or entity make better, more well-versed choices. The more research is embedded in the strategic schedule of a firm, the better equipped it is to deal with the transforming surroundings within which it functions. We believe that, the market research is a systematic, objective collection and analysis of data about your target market,
11-20-2020 | Advertising, Media Consulting, …
Ken Research Pvt Ltd
Online Market Research, Global Market Research Industry: Ken Research
Market research is well-defined as an effective process of obtaining, analyzing and interpreting information about a market, about a product or service to be offered for the sale in that market, and about the history, recent and impending consumers for the product or services. Traditionally, the market research was accompanied by going door-to-door and creating sources after meeting with the impending consumers and purchaser sectors. During the digital age, the Online
06-17-2020 | Advertising, Media Consulting, …
Ken Research Pvt Ltd
Ken Research Portal for Market Research Data | Car Finance Research Report Subsc …
Dossier 360 is a premium subscription platform which offers database industry research reports, press releases, investment and economy news, equity and private company reports.Platform further offers an access to the extensive collection of relevant and credible news and business content. Platform also covers global news, company news, industry updates, country analysis, regulatory information and all key public records. Our Dossier 360 offers a streamlined and instinctive interface that makes operations
03-06-2018 | Business, Economy, Finances, B …
Research and Research
Parylene Market Research Report Now Available on Research and Research
According to the recent report published by Research and Research, the Global Parylene Market is expected to provide sustainable growth opportunities during the forecast period from 2018 to 2026. This latest industry research study analyzes the Parylene market by various product segments, applications, regions and countries while assessing regional performances of numerous leading market participants. Browse Full report on Global Parylene Market forecast 2018-2026 report at http://www.researchandresearch.com/parylene-market/ The report titled "Parylene Market
Comments about openPR
Your portal is fast, simple, and easy to use. Others may have more functions but they also demand more editing time, you have to preformat the text in order to achieve a good result etc. I think openPR is really fantastic!
Andreas Knepper, wallmedien AG