UPnP in MOST® Networks 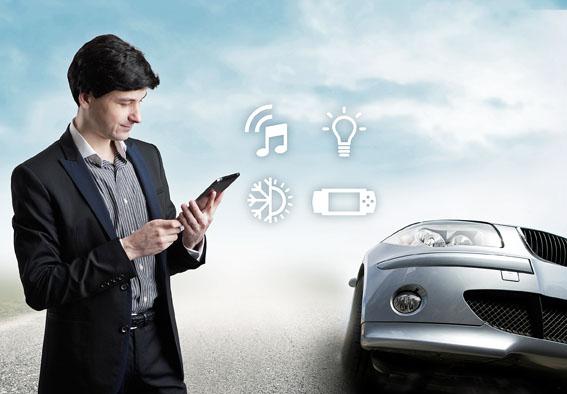 Universal Control of In-car MOST Devices through the UPnP standard

Universal Control of In-car MOST Devices by UPnPThe MOST® Cooperation - standardization organization for the leading automotive multimedia network technology Media Oriented Systems Transport (MOST) – presents the Universal Plug and Play (UPnP) standard for use within MOST networks. "While smartphones and other mobile devices are integrated into our daily lives, they are not integrated into our vehicles," stated Rainer Klos, MOST Cooperation Administrator. "MOSTCO now provides an approach that allows the close integration of consumer devices in MOST based vehicles. Through UPnP, we can offer the potential to extend consumer devices with the seamless controlling capabilities currently experienced with integrated automotive head units." The vehicle user interface can be more personalized and it can keep up with the short lifecycles of consumer electronics. In addition, shared car environments would particularly benefit from user preferences, such as a favorite radio station, stereo presets or climate control temperature, stored in personal devices and automatically applied when connecting with the vehicle. UPnP Interaction with MOSTOne use case is the exchange of audio data between a media server and a media renderer via the MOST synchronous channel. The connection establishment and the audio stream are managed by a standardized UPnP control point. The communication between the control point and the media server and renderer is transmitted by a gateway via the MOST Ethernet channel. The actual audio streaming is mapped to the MOST synchronous channel. This example consists of one audio/video control point and two controlled devices, a media server and a media renderer. In the automotive use case, the control point would be a smartphone with UPnP control point software. The media server and the media renderer would be integrated into in-vehicle devices, such as the head unit or the rear seat entertainment.About MOST Technology MOST (Media Oriented Systems Transport) is a multimedia networking technology optimized for use in cars and other applications. It enables the transport of high Quality of Service audio and video together with packet data and real-time control over a single transmission medium. MOST can use plastic optical fibers (POF), coax based electrical physical layer, and shielded and unshielded twisted pair (STP/UTP) copper wires that meet automotive environmental requirements. Today, MOST is used in over 160 car models as the communication backbone for their information and entertainment equipment. About MOST Cooperation The MOST Cooperation (MOSTCO) is the organization through which MOST Technology is standardized and refined so that it continues to stay abreast of the latest industry requirements. Today it consists of 16 international carmakers and more than 60 key component suppliers. They have joined together to work with the MOST Technology and to contribute to its innovation. The MOST Cooperation is prepared to embrace efforts to further develop and standardize the technology for other industries and to establish the corresponding work structures. The MOST Cooperation was founded in 1998 to standardize MOST Technology as a global standard for multimedia networking. Audi, BMW, Daimler, HARMAN and Microchip Technology are its core partners and constitute its Steering Committee. For more information see http://www.mostcooperation.com.Media Contact: Mandy Ahlendorf, ahlendorf hueggenberg gbr Phone +49 8151 9739098, MOSTCO_PR(at)mostcooperation.comMOST Cooperation · Bannwaldallee 48 · 76185 Karlsruhe Germany contact(at)mostcooperation.com · www.mostcooperation.com

12-06-2017 | IT, New Media & Software
Xtreme Media Works
PlayerXtreme Media Player Version 8 Has Arrived
Version 8 of the PlayerXtreme Media Player app is now available on the App Store. Here are all the new changes included in this release: 1. Support for iPhone X The app is now fully compatible and optimised for the iPhone X. Users can easily download and use the app on their new Apple devices. 2. Revamped Player UI The new update gave a brand new look to the player screen interface. 3. Search Search
02-16-2017 | IT, New Media & Software
Xtreme Media Works
PlayerXtreme updating app with fresh new interface
Xtreme Media works has announced today through their facebook page of an upcoming all new PlayerXtreme app, up-to-date with the latest and greatest features. Improved Interface with simple controls and all the same features and strong video playback engine. PlayerXtreme is the most famous and goto video player on iOS/Android/AppleTV when it comes to user-friendly interface. It has a Mac Finder/Windows like organizer for all your movie collection requirements. Over
05-13-2016 | IT, New Media & Software
Genius Vision
Genius Vision Announces UPnP Discovery Directory for IP Cameras
Genius Vision has created a new, user-driven platform to improve global IP camera compatibility. The company Genius Vision recently introduced a new addition to their website, which is called the UPnP Discovery Directory for IP Cameras. UPnP Discovery allows their software to discover and identify the manufacturers and models of IP cameras. It lists the extended camera compatibility and it’s very useful and simple for users to manage, even within
05-06-2014 | Tourism, Cars, Traffic
MOST Cooperation
MOST® Efficient Connection: MOSTCO Presents UPnP and Video Coding Use Cases at …
At the upcoming MOST Forum on May 13, 2014 in Stuttgart/Esslingen (Germany), the MOST® Cooperation – standardization organization for the leading automotive multimedia network technology Media Oriented Systems Transport (MOST) – will show the latest application highlights for the MOST150 network technology. “These will demonstrate that MOST Technology is the most efficient connection between various domains in the vehicle, such as infotainment, driver assist, navigation and communications inside and outside
11-19-2011 | Media & Telecommunications
Comarch S.A.
UPnP Forum introduces its new official Compliance Test Tool developed by Comarch
Today UPnP Forum, a leading global home networking standards group launched its new official certification test tool UCTT 2.0 developed by Comarch. This will surely strengthen the confidence in UPnP technology and extend the scope and relevance of the Forum's certification program. Comarch as a Member of UPnP Forum has been sharing its expert knowledge in the domain of advanced network protocols and certification tools for several years. Recently, Comarch successfully
04-22-2010 | Logistics & Transport
MOST Forum
High Spirit at Second MOST® Forum
Conference Focused on Consumer Device Connectivity to MOST and Applications Reaching Beyond Infotainment Starnberg (Germany) April 20, 2010 – The second MOST Forum took place on March 23rd, 2010, in Frankfurt, Germany. 150 professionals from the automotive electronics industry and academia participated in the very informative conference and visited the accompanying exhibition. The broad international audience was composed of attendees from Europe as well as India, Japan, South Korea, and
Comments about openPR
9 o'clock: discuss press release with client, 10 o'clock: submit release to openPR, within the briefest possible time release is published and displayed in a prominent place on openPR.de. I am thrilled!
Zehra Spindler, Calypso Now! - Communication Agency