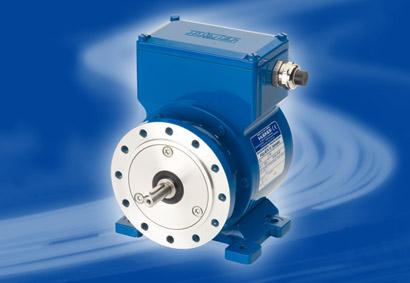 The Johannes Huebner Giessen encoder specialists have developed a looper encoder with incremental output for the specific requirements of steelworks and rolling mills. The FGL 40 captures the rotating angle of the looper and feeds the collected data back to the control system in real time using the new incremental interface in order to optimise tension control of the metal strip between the rolling stands. The precision electronics enable up to one million pulses per revolution. In this way, even the smallest changes in rotational speed and angle of movement can be captured. The high load rating of the ball bearings and encoder shaft and the shock resistance of up to 450 g allow the FGL 40 to reach a considerably longer useful life than conventional devices, making it the ideal choice for use in steelworks and rolling mills. Without a looper, the high and varying rotational speed of the rolling stands results in a material pile-up. In order to prevent this, the encoder captures the angular movement of the looper in a range of 0 to approximately 45 degrees and feeds it back to the control system to optimise rotational speed.Its mechanical features make it extremely robust The FGL 40 is available in flange or flange/foot construction type. For this application, its special ball bearings, which are designed to run with optimal lubrication even without a constant rotational speed, are set in an additional steel bushing. A 40-per cent higher dynamic load rating than standard ball bearings, the special grease filling and an additional radial shaft sealing ring with protective lip ensure a long useful life even in extreme operating conditions. The looper encoder is in compliance with protection classes IP 66 and IP 67 and protects the high-quality electronics effectively against the ingress of contaminants. The device has a reinforced shaft with a maximum load of 140 N in axial design and 170 N in radial design. It has a vibration resistance of 20 g. The encoder can be used in a temperature range of between -25° to +85°C.High-quality electronics provide superior electronic performance The high scanning quality of the FGL 40 generates a higher quality signal than common encoders. This is mainly due to the phase shift of 87 to 93 degrees from channel A to channel B and the duty ratio of +/-3 per cent. Another feature is the transmission frequency of up to 200 kHz. In addition to standard pulse counts such as 1000, 1024, 1200 and up to 2500, special pulse counts of up to one million per rotation are achievable at the customer’s request.Johannes Huebner Fabrik elektrischer Maschinen GmbH, based in Giessen in the German state of Hesse, is active in the following industrial sectors: steelworks and rolling mills, mining, container cranes, traction technology, hydroelectric power plants, wind turbines, energy systems. The company is considered a market leader in measurement, encoder and drive technology. Over a history of more than 70 years, Huebner Giessen has installed several thousand applications in heavy industry. From viewing and registering the installation situation on the ground to assembly of complete encoder systems, Huebner Giessen provides an all-around service across the globe. The company currently employs 90 people.Company contact: Johannes Huebner Fabrik elektrischer Maschinen GmbH Frank Tscherney Member of the Management Siemensstr. 7 D-35394 Giessen Tel.: +49 641 / 79 69-0 Fax: +49 641 / 79 69-41 frank.tscherney@huebner-giessen.comPress: Wassenberg Public Relations für Industrie und Technologie GmbH Michaela Wassenberg Rollnerstr. 43 D-90408 Nürnberg Tel.: +49 911 / 598 398-0 Fax: +49 911 / 598 398-18 m.wassenberg@wassenberg-pr.de