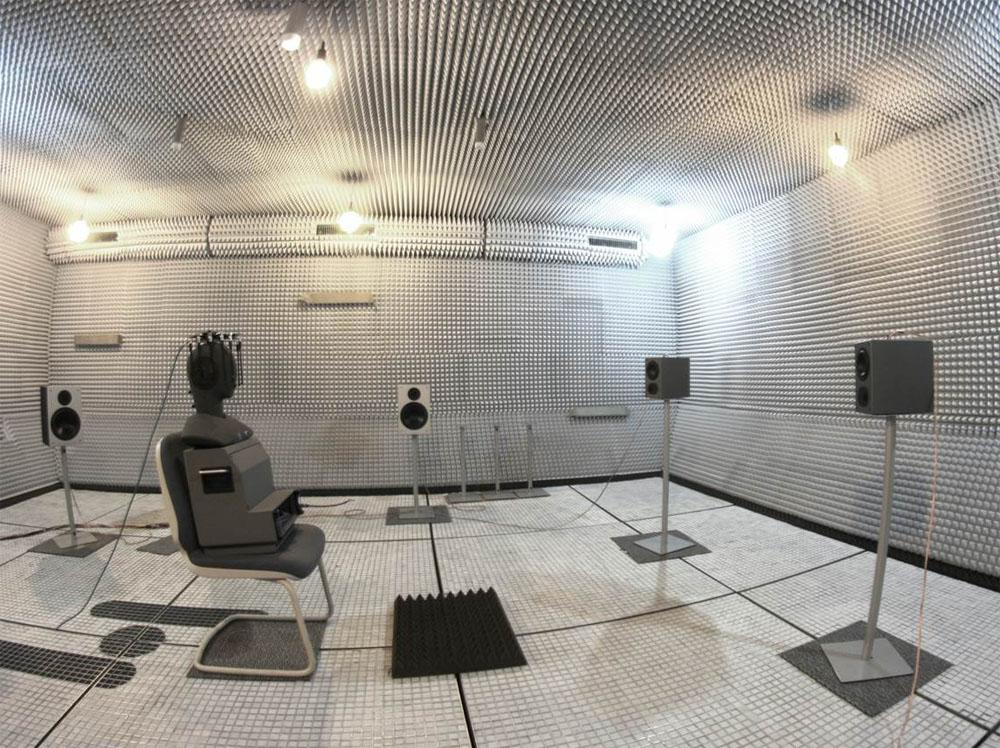 On the occasion of Mobile World Congress 2014 in Barcelona where HEAD acoustics exhibited, the German measurement technology company gave an insight into their new system for background noise simulation. This system is called 3PASS: 3-dimensional Playback of Acoustic Sound Scenarios. It is the successor of the current HAE-BGN system which is globally used in numerous telecom test laboratories. Its key application field is the voice and audio quality analysis of telecommunication devices and transmission systems in the presence of background noise.The major advantages of 3PASS compared to its predecessor are its ability to preserve and accurately reproduce the spatial characteristics of background noise which makes the system valuable for the development of complex background noise reduction algorithms. This is of particular importance for modern smartphones, especially for those with more than one microphone. Another advantage is that instead of the previously required three PEQ front ends, now only one labBGN front end is required, which considerably simplifies the measurement setup.The technical concept of this system has been recently introduced in standardization and is expected to form part of future telecommunication standards.Major components of the new system are: • 3PASS software (for Windows PC) • Measurement front end labBGN (for background noise playback ) • Microphone array MSA I (for sound recordings and room equalization) An 8-loudspeaker setup including amplifiers and cables complements the system setup. It will be possible to upgrade existing HAE-BGN software to 3PASS. Nevertheless, it is expected that both HAE-BGN and 3PASS will co-exist for an indefinite period because HAE-BGN is still in compliance with current standard requirements and both technologies have their own advantages. The front end labBGN is already available. 3PASS and MSA I are scheduled to be available by Mid 2014. Datasheets and other information (partly still in preparation) can be found at www.head-acoustics.de.HEAD acoustics was founded in 1986 and has been involved in noise and vibration, electroacoustics and voice quality testing since its inception. HEAD acoustics is based in Herzogenrath, Germany, with affiliates in USA, Japan and France as well as a world-wide network of representatives. The Telecom Division of HEAD acoustics manufactures telecom test equipment and provides consulting services in the field of speech and audio quality. Moreover, HEAD acoustics closely co-operates with DECT Forum, ETSI, ITU-T, 3GPP, TIA, CTIA, GSMA and other standardization bodies with regard to the development of quality standards for voice transmission and speech communication. In many partnership projects, HEAD acoustics has proven its competence and capabilities in conducting tests and optimizing communication products with respect to speech and audio quality under end-to-end as well as mouth-to-ear scenarios.HEAD acoustics GmbH Ebertstr. 30a 52134 Herzogenrath GERMANY Phone: +49 (0)2407 577-0 Fax: +49 (0)2407 577-99 Email: telecom@head-acoustics.de

07-30-2019 | Media & Telecommunications
HEAD acoustics GmbH
Global Certification Forum: HEAD acoustics provides world´s first certified tes …
HEAD acoustics is the world´s first - and up to now the only - manufacturer of measurement technology to have received approval from the Global Certification Forum (GCF) and the PCS Type Certification Review Board (PTCRB) responsible for North America for its test solution for super-wideband-capable mobile devices. The successfully certified test platform TP 190 consists of two main components: the communication quality analysis system ACQUA and the hardware platform
08-15-2018 | IT, New Media & Software
HEAD acoustics GmbH
VoCAS: New version extends the possibilities for the evaluation of voice control …
HEAD acoustics has launched a new version of VoCAS (Voice Control Analysis System), the efficient software for evaluating voice control systems. The turnkey test solution now supports the modular multi-channel labCORE front end of the technology manufacturer from Herzogenrath. Thus, VoCAS offers manufacturers even more possibilities to test their ASR system (Automatic Speech Recognition) in vehicles, mobile phones or smart speakers objectively and reproducibly. Flexible channel selection for recording and playback Now,
04-12-2018 | Health & Medicine
HEAD acoustics GmbH
Milk thistle
Niryas.com : Milk thistle is also well-known as ‘Mary thistle’ and is for the most part, used to take care of liver problems. It is a flowering plant that belongs from the same family of daisy plants and also includes other plants like sunflowers. It grows mainly in Mediterranean countries and is used to make natural remedies. It has been used for over 2,000 years. Milk thistle is in the
02-02-2018 | Media & Telecommunications
HEAD acoustics GmbH
HEAD acoustics launches modular multi-channel front end labCORE
Powerful and versatile all-in-one solution for a wide variety of applications With the new modular multi-channel front end labCORE, HEAD acoustics introduces a powerful and versatile measurement instrument onto the market. Due to its modularity, its wide selection of digital and analog inputs and outputs as well as its programmable interfaces, labCORE is the all-in-one solution for voice and audio quality measurements. The front end is designed to be future-proof: on

05-20-2019 | IT, New Media & Software
XinFin Hybrid Blockchain
XinFin Network Presents One-Click Installer For Blockchain Node Setup
Blockchain is a revolutionary technology that is re-defining an inevitable component of our lives, finance. It has always been debated that the world’s financial system is due for a massive upgrade in terms of trust, transparency, accountability, and most importantly decentralization. Bitcoin, the earliest and the most successful chain supports over 8,000 nodes while Ethereum has about 25,000 nodes. Most of the nodes run by these ecosystems are mining nodes
04-04-2019 | Industry, Real Estate & Constr …
CAS DataLoggers
Simple Monitoring Setup Optimizes Greenhouse Temperature Control
Temp & Humidity Data Loggers Find Cooler Zones CAS DataLoggers provided the greenhouse temperature control and monitoring solution for a small greenhouse currently cultivating several species of herbs for cooking and medicinal purposes. From potting to product, each variety has to be kept at ideal growing conditions before sale. From his own experience, the owner preferred to maintain the crop around 70°F (21°C) and an 80% relative humidity. Last year he
02-06-2018 | Business, Economy, Finances, B …
TMR Research
Industrial PC Market - High Initial Setup Cost during 2017 - 2025
Global Industrial PC Market: Overview Industrial PCs are high-performing computing solutions that aid in planning, controlling, and monitoring industrial operations in real-time. These systems are installed for data acquisition and process control needs with the objective to increase productivity and enhance operational efficiency. However, industrial PCs have an additional cost as they are equipped with additional capabilities. Their capabilities include optimizing supply and distribution activities in manufacturing units and aid
05-08-2017 | Business, Economy, Finances, B …
Interloper, INC
How to quickly setup an online store
Useful statistics on why online shops have become so famous for complete time and part time marketers and how to speedy setup an online keep if you so desire. Dallas, TX– USA 1, 2017. Bloggerkhan publicizes the e-book in their new article on the way to quick setup an internet shop along side pinnacle reasons why marketers ought to be part of this growing market. Consistent with mr. Babar, a spokesperson for
08-22-2016 | Industry, Real Estate & Constr …
TMR – Research Reports
Machine Vision and Factory Automation offers Smart Manufacturing Setup
Information and communication technology (ICT) have become crucial to the social infrastructure, therefore systems that allow society to function more efficiently are increasingly needed. Machine vision (MV) is a technology that meets these expectations and controls the movement of machinery by processing visual information. Machine vision plays vital role of factory automation (FA) in industrial manufacturing. Moreover, machine vision has also extended its scope to the fields of medicine, security,
03-20-2012 | Advertising, Media Consulting, …
Calltracks Limited
Calltracks Limited Reduces Setup Time with Call Tracking Software Upgrade
Northampton, United Kingdom: Calltracks Limited, a leading UK call tracking company has been tracking phone calls from on and offline sources for eight years. They were one of the pioneers of the industry and their software has provided call data to a diverse mix of clients. As part of their ongoing commitment to new and existing clients Calltracks Limited has upgraded their call tracking software to record keywords automatically.
Comments about openPR
I can't but agree to the positive statements about your portal: easy to use, clear layout, very good search function, and quick editing!
Jens O'Brien, Borgmeier Media Communication