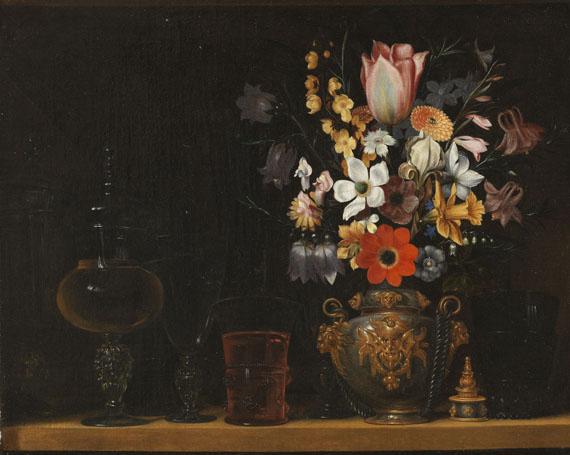 Munich, 18 February, 2014, (kk) – Georg Flegel is not only one of the most famous European still life painters of the early 17th century, but also the first German artist to specialize in this genre. A masterpiece of his creation will be called up in Ketterer Kunst's auction of Old Masters & Art of the 19th century with an estimate of € 90.000-120.000. Georg Flegel's famous “Schrankbild“ („Cupboard“), today in possession of the National Gallery in Prague, was made in close connection with the “Stillleben mit Blumenstrauss und Glaspokalen“. It is an independent version of the upper half of the Prague “Schrankbild“, which explains the unusual frontal view on contrary to the normally slightly aslant perspective. Flegel's mastery becomes particularly obvious in the execution of the delicate glasses, the light reflections on their transparent surfaces seem to form a relief. The painting's amazing freshness is largely owed to the flower bouquet with flowers from different seasons of the year.In the section of Art of the 19th century, Alexander Koester creates a particularly impressive atmosphere with his lovely observations of animal life. His “Enten am See“ expresses freedom in nature in the best tradition of Naturalism. The work from around 1909-13 will be called up with an estimate of 30.000-40.000. Edward Theodore Compton's oil painting “Bei Kaprun: Mooserbodental mit Blick auf den Karlinger Gletscher“ possesses a truely documentary value. The work from 1916 captured the original view into the Mooserboden Valley, which was turned into a barrier lake after damming the mountain creek “Kapruner Ache“. In the late 1940s, some 30 years after the painting (estimate: € 18.000-24.000) was made, a massive dam over a length of 500 metres and a height of 100 meters was build at the end of the valley. Today the lake holds 160 million cubic meters of water and serves for power generation. In another work by Compton, the Bavarian by choice emphasizes the majestic silence of snow-covered peaks with great mastery. His small watercolor over pencil “Am Adamello“ from around 1920 shows a particularly captivating motif. It will be called up at € 2.000-3.000.The seventh edition of Francisco de Goya's series “Los Caprichos“ with 80 sheets is definitely going to make for a rush in the auction venue. Last year the famous cycle of etchings, with which the artist decried the church's moral lapses and the social and political miseries of his days with great sarcasm, was sold with great success by Ketterer Kunst – both in the extremely rare first edition, published when Goya was still alive (starting price: € 96.000, result: € 195.000*) as well as in sixth edition (starting price: € 9.600, result: € 25.000*).The range of offerings of 19th century art is completed by, among others, Anton Doll's oil painting “Verschneites Dorf“ from ca. 1860-70 and Heinrich von Zügel's work “Schafe im Pferch“ in a size of 49 x 70 cm (estimate: each € 7.000-9.000).Catalog: Free catalogs available on: +49-(0)89-552440 or by e-mail: a.krenski@kettererkunst.de. Preview: Hamburg 06/07 May Düsseldorf 09/10 May Berlin 13 - 15 May Munich 17 - 23 May *) The result is the hammer price + 25 percent buyer's premium for objects up to € 25 000 + 22 percent buyer's premium for objects between € 25 001 and € 500.000 + 20 percent buyer's premium for objects from € 500 001Since it was founded in 1954, Ketterer Kunst has been firmly established in the front ranks of auction houses dealing in fine art and rare books, with its headquarters in Munich and a branch in Hamburg. Gallery rooms in Berlin as well as representatives in Heidelberg, Düsseldorf and Modena (Italy) contribute substantially to the company's success. In addition, exhibitions, special theme and charity auctions as well as permanent online auctions on www.ketterer-internet-auctions.com are regular events at Ketterer Kunst. Robert Ketterer is auctioneer and owner of Ketterer Kunst.Press inquiries:Ketterer Kunst Joseph-Wild-Str. 18 81829 Munich-Riem (Messe) Michaela Derra M.A. phone +49-(0)55244-152 fax +49-(0)55244-177 E-mail: m.derra@kettererkunst.deCustomer inquiries:Ketterer Kunst Joseph-Wild-Str. 18 81829 Munich-Riem (Messe) phone +49-(0)55244-0 fax +49-(0)55244-177 E-mail: infomuenchen@kettererkunst.de

01-11-2019 | Energy & Environment
Research for Markets
Biomass Power Industry Analysis to 2023 | DONG Energy, Wilcox & Flegel Oil Co, E …
According to the Biomass Power Market report, the global market is expected to witness a relatively higher growth rate during the forecast period. This Juvenile Biomass Power Market Report cover strategic profiling of key players in the market, comprehensively analyzing their core competencies, and drawing a competitive landscape for the market. This study also analyzes the market status, market share, growth rate, future trends, market drivers, opportunities and challenges, risks
10-10-2018 | Energy & Environment
Research for Markets
New Research Study on Biomass Power Industry Analysis by Top key Players - DONG …
DONG Energy, Wilcox & Flegel Oil Co, Energy Market Regulatory Authority (EMRA), Ameresco, Drax Biomass Inc., Enviva, MGT , International, Alstom Power, Helius Energy Plc are the leading companies and brands that are driving the Biomass Power Market. The CAGR numbers are looking quite impressive for the forecast period of 2018-2023 in the Biomass Power Market. The sales, import, export and revenue figures are also skyrocketing in the forecast period.
Comments about openPR
OpenPR ist the nicest and most clearly laid out PR platform I have seen to this day. The press releases are displayed very nicely and clearly and without any unnecessary frills. The updates are fast and the finished release looks appealing and is clearly legible. Even with 16 years of experience one discovers new things from time to time. Congratulations!
Gabriele Ketterl, Director Marketing & PR, Menads