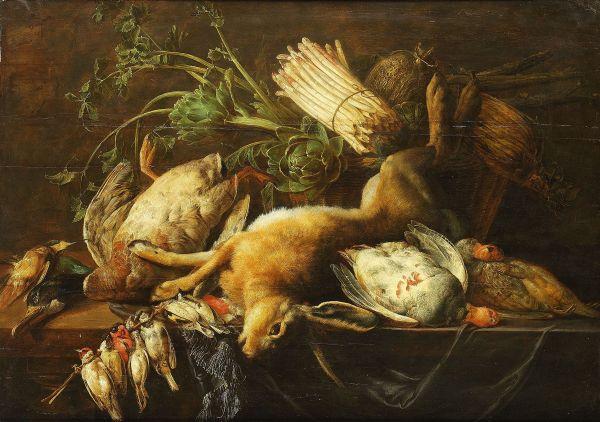 Hamburg, 13 September 2007, (kk) - Adriaen van Utrecht’s “Küchenstillleben mit erlegtem Wild und Gemüse” [“Kitchen Still Life with Game and Vegetables”] is, at an estimate of € 40 000-60 000, as things look at the moment, the most important work to be sold at the Ketterer Kunst auction of Old Masters & Art of the 19th Century / Marine Art in Hamburg on 27 October 2007. Dating from the latter half of the 1640s, the painting is similar to a version in the Alte Pinakothek in Munich dated to 1648. The Flemish animal and still life painter Adriaen van Utrecht worked by choice with a sombre palette, a predilection that places him close to Jan Fyt. Also typical of van Utrecht’s style is his extremely sculptural handling. The dead hare at the centre of the work seems to be looking the viewer directly in the eye. Compared to the van Utrecht, Julius II Adam’s “Katzenfamilie” [“A Family of Cats”: 1890], although executed with no less artistry, seems playful indeed. Just as in the van Utrecht still life, an incredible fondness for detail is apparent. Apart from the pleasing cats, a fly and the carpet fringe attest to the artist’s consummate skill. Julius II Adam came from a celebrated Munich family of animal painters and his mastery of his metier is honoured with the epithet “The Cat Raphael”. Measuring 31.2 x 45 cm, the work carries an estimate of € 18 000-24 000. Franz von Defregger’s “Portr舩 Franz von Lenbach” [“Portrait of Franz von Lenbach”] in oils carries a slightly higher estimate at € 20 000-30 000, the same as that for “Ansicht von Wolfsegg” [“View of Wolfsegg”], which Johann Georg von Dillis executed in 1788 in watercolour, India ink and pencil. Von Dillis was one of the first German artists to realize the potential of watercolor as an art medium in its own right. Measuring 26.3 x 36.6 cm, the picture is compelling for the fresh impression of nature which the artist - in this, too, ahead of his time - captured by working directly from nature. A whisked pencil drawing “Dame mit Hut” [“Lady Wearing a Hat”] by Adolph von Menzel, which carries an estimate of € 18 000-24 000, will go under the hammer along with a Jan van Huysum watercolour “Arkadische Landschaft” [“Arcadian Landscape”: estimate: € 12 000-14 000), a “M臈chen aus Chioggia” [“Girl from Chioggia”] by Eugen von Blaas (estimate: € 10 000-12 000) as well as works by Anthonie Braakmann, Emil Brack, Christian Ludwig Bokelmann, Philipp Hieronymus Brinkmann, Rudolf Höckner, Rocco Marconi, Willy Moralt, Carl Morgenstern, Harmensz. Rembrandt van Rijn, Augustin Alexandre Thierriat, Wilhelm Trübner and Heinrich von Zügel. In the Marine Art division, important names include Hugo Schnars-Alquist, whose 1920 “Vollschiff auf bewegter See” [“Ship on a Stormy Sea”] enters the race at € 5000-6000, Hans Bohrdt, Julius Gregersen and Johannes Holst.Enquiries for Art of the 20th/21st Centuries: Ketterer Kunst Meßberg 1 20095 Hamburg Barbara Guarnieri phone: 040-374961-28 (Fax: -16) Ruth Tenschert phone: 040-374961-22 (Fax: -16) E-Mail: infohamburg@kettererkunst.de www.kettererkunst.de Press enquiries: Ketterer Kunst Prinzregentenstraße 61 81675 München Michaela Derra phone: 089-55244-152 (Fax: -166) E-mail: m.derra@kettererkunst.de Pre-sale viewings of selected works have been scheduled for the following dates and times: 11-12 October, 11 am-7 pm 13-14 October, 11 am-4 pm at Ketterer Kunst, 70 Fasanenstrasse, Berlin 16-18 October, 11 am-5 pm at Ketterer Kunst, 61 Prinzregentenstrasse, Munich All works will be shown: 20-24 October, 11 am-5 pm except Sunday 25 October, by appointment at Ketterer Kunst, 1 Meßberg, Hamburg The auction begins: 27 October 2007 at 10 am, Ketterer Kunst, 1 Meßberg, HamburgSince it was founded in 1954, Ketterer Kunst has been firmly established in the front ranks of auction houses dealing in art and rare books. While our Munich headquarters in the Prinz-Alphons Palais is responsible for the two traditional annual auctions of Modern Art & Post War, the Meßberghof in Hamburg is the venue for two traditional auctions a year, each based on the following fields: Old Masters and 19th-Century Art /Marine Art and Rare Books - Autographs - Manuscripts - Decorative Prints as well as Modern Art & Post War, with a focus on works on paper. In addition, exhibitions, special and benefit auctions for charity as well as live auctions online are regular events at Ketterer Kunst.

05-24-2019 | Health & Medicine
TMR Research
Bradycardia Market shares, and product portfolio of the key participants | Medtr …
This report on the global bradycardia market provides quantitative and qualitative evaluations of the market in its current scenario and estimates the future state, based on in-depth assessment of all the factors that may impact the inflow of the demand in the near future. The report also profiles a number of key companies in order to represent the competitive landscape. Request Sample Copy of the Report @ https://www.tmrresearch.com/sample/sample?flag=B&rep_id=509 Global Bradycardia Market:
04-23-2019 | Health & Medicine
TMR Research
Bradycardia Market accurate and detailed assessment of the competition 2025 : Me …
Global Bradycardia Market: Overview Bradycardia, also known as, bradyarrhythmia is one of the most important cardiac diseases. Bradycardia is a medically abnormal state of heart in which the pulse rate (heart beats) is less than 60 beats per minute (BPM). Bradycardia, in simplest sense, is a condition, in which heart shows decline in its efficiency. If heart shows around 50 BPM, it brings symptoms like tiredness, weakness, fatigue, dizziness and skin
09-19-2018 | Health & Medicine
TMR Research
Bradycardia Market trends 2017 - 2025 : Boston Scientific Corporation, St. Jude …
Global Bradycardia Market: Snapshot Bradycardia, which is a condition pertaining to slow heart rate, affects from the very young to the oldest, although geriatrics are mostly diagnosed for this heart-beat irregularity. It has been estimated that nearly 600,000 people across the world receive treatment for bradycardia, commonly caused by a problem with the S-A node or an issue in the electrical pathways of the heart. The global bradycardia market involves the diagnosis
07-10-2018 | Health & Medicine
TMR Research
Aneurysmal Subarachnoid Hemorrhage Market - Utrecht University, University of Mi …
Global Aneurysmal Subarachnoid Hemorrhage Market : Snapshot According to the National Institutes of Health (NIH), aneurysmal subarachnoid hemorrhage (SAH) has turned into a glaring health burden across the world and possesses high rates of permanent disabilities and fatalities. It has been estimated by the NIH that approximately 9 out of 100,000 people across the world suffer from some variation of aneurysmal subarachnoid hemorrhage, a number which is more concerning in the
05-08-2017 | Associations & Organizations
Pellikaan timing BV
Dutch Watch Professionals (DWP) organizes a bourse for Dutch watch brands
Utrecht, The Netherlands – The Dutch Watch Professionals (DWP), founded at the beginning of 2017, intends to become a branche organization for Dutch watch brands and the deliverers of this industrial branche. On May 27 2017 they organize the first Dutch Watch Showcase (DWS), a bourse for the above mentioned companies, taking place in Utrecht, The Netherlands. In 2016 a couple of Dutch watch brands came up with the idea to
02-14-2014 | Logistics & Transport
IVU Traffic Technologies AG
Successful start of operations in Utrecht
Qbuzz is on the way with IVU Following on from the Friesland and Groningen-Drenthe regions, Qbuzz was able to win a third concession for the Utrecht region, which is also the largest concession nationwide. On 8 December 2013 at 2.00 a.m., the private Dutch public transport operator began its operations with the help of IVU systems and will be providing its services for the next ten years. In order to be able
Comments about openPR
OpenPR is clearly structured and remains true to its principle of confining itself to the essential parts. OpenPR has proven to be a very good and reliable partner to our media agency: Within the shortest time the releases are online and go down well with the media representatives. The success of OpenPR is reflected in the steadily increasing number of press releases. It is good that OpenPR exists!
Ursula Koslik, Director Marketing & PR, F+W Hamburg