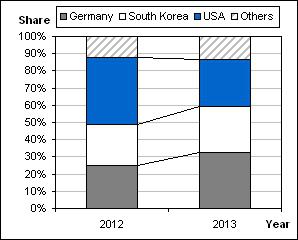 Both producers profit from latest Chinese rulings, says Bernreuter ResearchWürzburg (Germany), January 30, 2014 – Wacker Chemie AG and OCI Company Ltd., the world's No. 2 and 3 polysilicon manufacturers, respectively, are the big winners after the latest rulings of the Chinese Ministry of Commerce (Mofcom) regarding anti-dumping and anti-subsidy duties on polysilicon imports into China. While final duty rates of up to 57% have been imposed on US manufacturers such as Hemlock Semiconductor Corp. and REC Silicon Inc. for the next five years, the South Korean producer OCI will get away with a very low tariff of only 2.4%. Germany-based Wacker does not even have to pay any duty, according to Mofcom's preliminary ruling on polysilicon imports from the European Union (EU) announced on January 24."Now it is unlikely that China will still impose final duties on polysilicon imports from the EU," comments Johannes Bernreuter, head of Bernreuter Research and author of the firm's new global polysilicon market report, The 2014 Who's Who of Solar Silicon Production. "The latest decision has obviously been influenced by the compromise that the EU and China reached last July in the trade dispute about imports of Chinese wafers, solar cells and modules into the EU." OCI, the only viable South Korean polysilicon manufacturer beside the new entrants Hanwha Chemical and SMP, has successfully lobbied for a low duty rate in the course of negotiations between China and South Korea on a bilateral free trade agreement.Uncertainty about processing trade favors Wacker and OCIUS manufacturers have, however, used so-called processing trade as a big loophole to avoid the high duty rates: Imported goods that are processed into products for export from China are exempt from any duties. Since preliminary duties were imposed on polysilicon imports from the US in July 2013, the share of processing trade in monthly polysilicon imports from the US has risen to values between 90% and 99%.Nevertheless, Wacker and OCI have already gained market share in the total polysilicon volume imported into China, which amounted to 82,755 metric tons (MT) in 2012 and 80,653 MT in 2013. While the share of imports from the US dropped from 39% in 2012 to less than 28% in 2013, Wacker increased its share from 25% to nearly 33% in the same period. Imports from South Korea, which are dominated by OCI, rose from less than 24% to almost 28%. "Speculations that the Chinese government could change the rules for processing trade of polysilicon are playing into the hands of Wacker and OCI," says Bernreuter. "We expect that both companies will continue to raise their share in polysilicon imports into China."Comprehensive background on the trade dispute with a great deal of data from customs statistics is provided in The 2014 Who's Who of Solar Silicon Production. The 124-page report contains forecasts on supply, demand, prices and manufacturing costs of polysilicon through 2017 as well as the latest company and technology developments. For more information on the report, please go to: http://www.bernreuter.com/en/shop/polysilicon-market-reports/2014-edition/report-details.htmlAbout Bernreuter ResearchBernreuter Research was founded in 2008 by Johannes Bernreuter, one of the most reputable photovoltaic journalists in Germany, to publish global polysilicon market reports. As early as 2001, Bernreuter authored his first analysis of an upcoming polysilicon bottleneck and new production processes. Since the premiere edition in 2010, the Who's Who of Solar Silicon Production series has gained a reputation of providing the most comprehensive and accurate polysilicon reports on the market.Press Contact:Bernreuter Research – Polysilicon Market Reports Huttenstr. 10, 97072 Würzburg, GermanyYour Contact Partner: Johannes Bernreuter, Company Head Telephone: +49/931/784 77 81 E-mail: info@bernreuter.com

You can edit or delete your press release Polysilicon Duties: Wacker and OCI Win the Day here