Polysilicon Market on a Roller-Coaster Ride 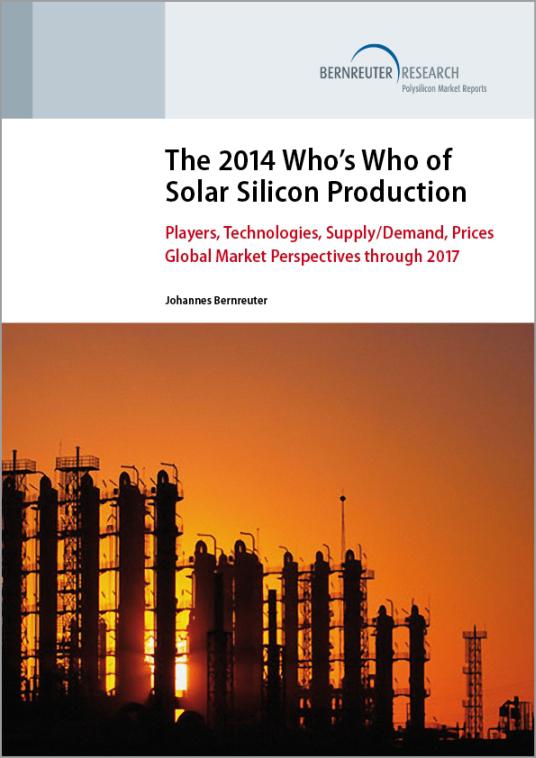 The 2014 Who's Who of Solar Silicon Production provides forecasts on the polysilicon market through 2017.

New report from Bernreuter Research: Oversupply returns after short recoveryWürzburg (Germany), January 8, 2014 – After a short recovery in 2013, the polysilicon industry is once again steering towards oversupply. This is one of the conclusions of the latest global polysilicon market report from Bernreuter Research, The 2014 Who's Who of Solar Silicon Production. "Although shutting down capacities of approximately 135,000 metric tons (MT) since 2011 has solved the oversupply problem in the short term, new entrants and recommissioned Chinese plants will again tip the supply-demand balance in 2015 at the latest," says Johannes Bernreuter, head of Bernreuter Research and author of the new report. Correspondingly, the polysilicon price on the spot market will fall from 18 US$/kg at the end of 2013 to 16 $/kg by the end of 2014, forecasts Bernreuter.Polysilicon is the feedstock for the photovoltaic (PV) and semiconductor industries. According to preliminary estimates of Bernreuter Research, the global output in 2013 decreased to approximately 228,000 MT, 4% down from 238,000 MT in 2012. The decline was mainly due to low utilization rates in the first quarter. In contrast, the newly installed PV capacity increased at a double-digit rate to about 36 gigawatts (GW) in 2013; thus, the large polysilicon inventories resulting from oversupply in 2011 and 2012 could be reduced decisively.New low-cost capacities drive down the polysilicon spot priceIn 2014 strong growth of the PV industry, which makes up approximately 90% of the total demand for polysilicon, will initially drive up the spot price. Bernreuter Research covers the broad range of PV installation forecasts with three scenarios, spreading from 43 GW (low case) to 46 GW (base case) and 49 GW (high case). In the high-case scenario, the polysilicon spot price will rise to a bandwidth of 21 to 24 $/kg in the first half of 2014, whereas it will not exceed 20 $/kg in the base case. In all three scenarios, however, the spot price will drop to 16 $/kg by the end of 2014.The reason is that new low-cost capacities of up to 66,000 MT are coming on stream in 2014, which will push expensive producers out of the market and will consequently reduce the spot price. Roughly one third of the new capacity will be based on fluidized bed reactor technology using monosilane as feed gas. While maintaining high silicon purity, this technology entails manufacturing costs that are substantially lower compared to the established Siemens process. Therefore, a sustainable price upswing is not in sight, concludes Bernreuter: "At least over the next three years, spot prices of 25 or even 30 $/kg, which some industry players dream of, will remain a Fata Morgana."More details on the polysilicon, solar and semiconductor markets are provided in The 2014 Who's Who of Solar Silicon Production. The 124-page report contains forecasts on supply, demand, prices and manufacturing costs of polysilicon through 2017 as well as the latest company and technology developments. For more information on the report, please go to: http://www.bernreuter.com/en/shop/polysilicon-market-reports/2014-edition/report-details.htmlAbout Bernreuter ResearchBernreuter Research was founded in 2008 by Johannes Bernreuter, one of the most reputable photovoltaic journalists in Germany, to publish global polysilicon market reports. As early as 2001, Bernreuter authored his first analysis of an upcoming polysilicon bottleneck and new production processes. Since the premiere edition in 2010, the Who's Who of Solar Silicon Production series has gained a reputation of providing the most comprehensive and accurate polysilicon reports on the market.Press Contact:Bernreuter Research – Polysilicon Market Reports Huttenstr. 10, 97072 Würzburg, GermanyYour Contact Partner: Johannes Bernreuter, Company Head Telephone: +49/931/784 77 81 E-mail: info@bernreuter.com