ADAS Surround View over MOST® 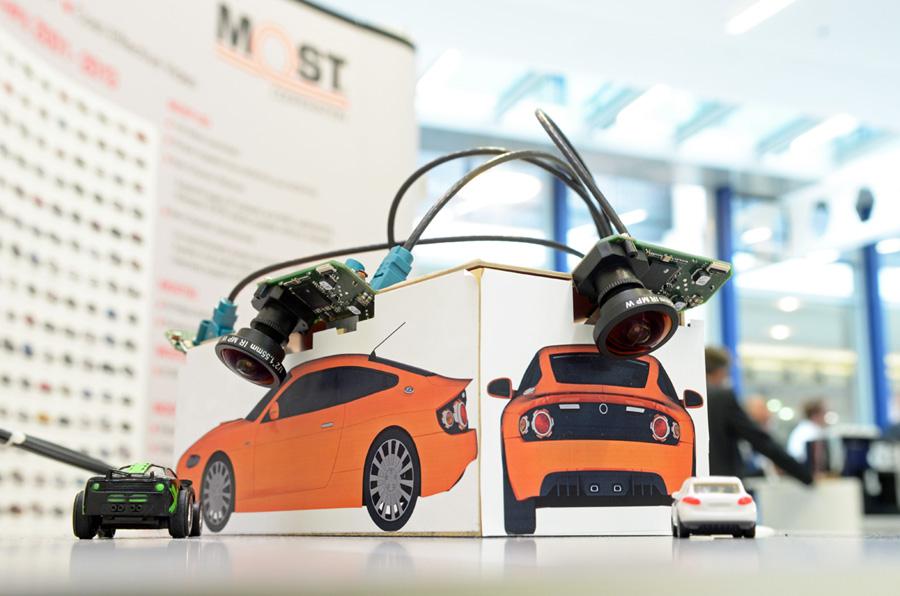 Surround view demo system based on MOST150 coaxial cabling

MOST150 Star Topology Enables Advanced Driver Assist SystemsThe MOST® Cooperation (MOSTCO) - the standardization organization for the leading automotive multimedia network Media Oriented Systems Transport (MOST) – is showcasing a MOST150 based advanced driver assist system (ADAS) network that transmits HD video streams from up to eight cameras, using up to 1.2 Gbit/s total bandwidth. The surround view cameras are connected to a central node in a star topology over coaxial cable. The multi-channel network approach of MOST, with its inherent synchronicity, is perfectly adapted for ADAS since it assures hard real-time determinism and ultra-low latency at 10 milliseconds; flexible topology; high bandwidth; safety aspects; as well as robustness and maturity. The 360-degree automotive top view system uses small-footprint high dynamic range cameras. The cameras are based on a two-chip solution and, with the remote control feature, no microcontroller is required. Multiplying Bandwidth to Several MOST150 BranchesA multiport network interface controller in the central node allocates the true, full bandwidth to every branch. The different branches can then be built with any topology, including star, ring, tree or daisy-chain, and can be hot-plugged or disconnected without influencing the flow of streaming data in the rest of the system. Low Latency Streaming Meets Safety RequirementsSending a video stream from the camera to the renderer means that a significant amount of data is streamed for a prolonged period of time. Especially with ADAS, the continuously flowing stream of data cannot be interrupted or delayed. MOST provides the transport of data streams with guaranteed bandwidth and latency that the multiplex architecture inherently offers. It does not require either additional communication processors and addressing information, or the bandwidth-wasting process of breaking up the data into packets that then need to be examined every time they go through a device along the route. Complying with safety protocols, MOST delivers video streams with low latency and determinism throughout the system.Coaxial Cabling Destined for Driver Assist SystemsUsing coaxial cable, MOSTCO provides a scalable electrical physical layer for the ADAS automotive domain, as it allows for bidirectional communication and power supply across the same cable. Coaxial cabling is the industry standard cable for transport of high frequency signals. It has inherent shielding and provides low-cost and standard cables and connectors. Its construction enables an automated connector assembly, allowing lower assembly costs than shielded twisted pairs of copper wires (STP). Depending on bandwidth and cable/connector quality, it offers low reflections at up to 100 meters distance. The coaxial standard already works up to several Gbit/s and thus delivers an EMC-proof and low-cost electrical physical layer.About MOST Technology MOST (Media Oriented Systems Transport) is a multimedia networking technology optimized for use in cars and other applications. It enables the transport of high Quality of Service audio and video together with packet data and real-time control over a single transmission medium. MOST can use plastic optical fibers (POF), coax based electrical physical layer, and shielded and unshielded twisted pair (STP/UTP) copper wires that meet automotive environmental requirements. Today, MOST is used in over 150 car models as the communication backbone for their information and entertainment equipment.About MOST Cooperation The MOST Cooperation (MOSTCO) is the organization through which MOST Technology is standardized and refined so that it continues to stay abreast of the latest industry requirements. Today it consists of 16 international carmakers and more than 60 key component suppliers. They have joined together to work with the MOST Technology and to contribute to its innovation. The MOST Cooperation is prepared to embrace efforts to further develop and standardize the technology for other industries and to establish the corresponding work structures. The MOST Cooperation was founded in 1998 to standardize MOST Technology as a global standard for multimedia networking. Audi, BMW, Daimler, HARMAN and Microchip Technology are its core partners and constitute its Steering Committee. For more information see http://www.mostcooperation.com.Media Contact: Mandy Ahlendorf Tel. +49 8151 555009 11 MOSTCO_PR(at)mostcooperation.com MOST Cooperation Bannwaldallee 48 76185 Karlsruhe Germany http://www.mostcooperation.com


More Releases for MOST150

04-20-2016 | Logistics & Transport
RUETZ SYSTEM SOLUTIONS
MTCM for MOST150 Coax Physical Layer Testing
RUETZ SYSTEM SOLUTIONS Introduces MOST Tester Cable Model as New Extension for Physical Layer Stress Test Tool RUETZ SYSTEM SOLUTIONS – experts in automotive data communications – now also provide coaxial physical layer testing for MOST150. The recently developed MOST Tester Cable Model "MTCM" is an extension of the well-proven Physical Layer Stress Test Tool "PhLSTT". "Our new MTCM meets the additional challenges and demands for physical layer testing that
10-17-2014 | Tourism, Cars, Traffic
MOST Cooperation
MOST® ICA Program Focuses on Latest MOST150 Implementations and Applications
The MOST Cooperation (MOSTCO) – the standardization organization for the leading automotive multimedia network Media Oriented Systems Transport (MOST) – welcomes carmakers, suppliers and academics to join the 15th MOST Interconnectivity Conference Asia (ICA) on November 13, 2014 in Seoul (South Korea). During the morning session, members of the Steering Committee will give an overview which will be expanded by various member presentations in the afternoon. Professionals involved with MOST
05-15-2014 | Tourism, Cars, Traffic
MOST Cooperation
First MOST150 Implementation in Asia
Hyundai Motor Implements MOST150 in the All-New Genesis The MOST® Cooperation - standardization organization for the leading automotive multimedia network technology Media Oriented Systems Transport (MOST) - is delighted to announce that Hyundai Motor Company will use MOST150 in its all-new Genesis model. MOST150, which is featured in a handful of other premium brand vehicles, will provide a high level of connectivity and comfort to the driver and passengers. This system
11-29-2012 | Industry, Real Estate & Constr …
GOEPEL electronics Ltd.
MOST150 Controller for Multivalent Applications
Introducing basic MOST 6161, GOEPEL electronic has extended the range of communication solutions for MOST150. The new stand-alone module can be integrated in test environments for electronic control units (ECUs) via either USB or Ethernet interface. Both host interfaces are provided in parallel. basic MOST 6161 can execute bus master and slave functions within a MOST ring configuration. Furthermore, a so called Spy Mode is provided in which basic MOST 6161
04-21-2011 | Industry, Real Estate & Constr …
GOEPEL electronics Ltd.
PXI 6161 - new Communication Controller for MOST150
GOEPEL electronic provides PXI 6161, an all-new communication controller supporting MOST150 based on the highly powerful Series 61. Using this new hardware platform, users are able to individually and flexibly configure the controller according to their individual needs. That means, GOEPEL electronic provides one-stop solutions in software and hardware supporting MOST150. Using PowerPC architecture, the host PC is relieved and valuable bandwidth for additional application is obtained, enabling complex and CPU-intensive
04-13-2010 | IT, New Media & Software
MOST Cooperation
MOST150 Broadens In-car Multimedia
MOST(r) Technology Forwards High-definition Audio and Video into Vehicles Karlsruhe (Germany) - The MOST Cooperation is pleased about the milestones the latest MOST Technology has accomplished: MOST150 now offers the technology and full audio/video capability for next generation automotive infotainment features and devices such as Head Units, Rear Seat Entertainment, amplifiers, TV-tuners and video displays. Based on the technology specification by the organization, through which the leading automotive multimedia network Media
Comments about openPR
I can't but agree to the positive statements about your portal: easy to use, clear layout, very good search function, and quick editing!
Jens O'Brien, Borgmeier Media Communication