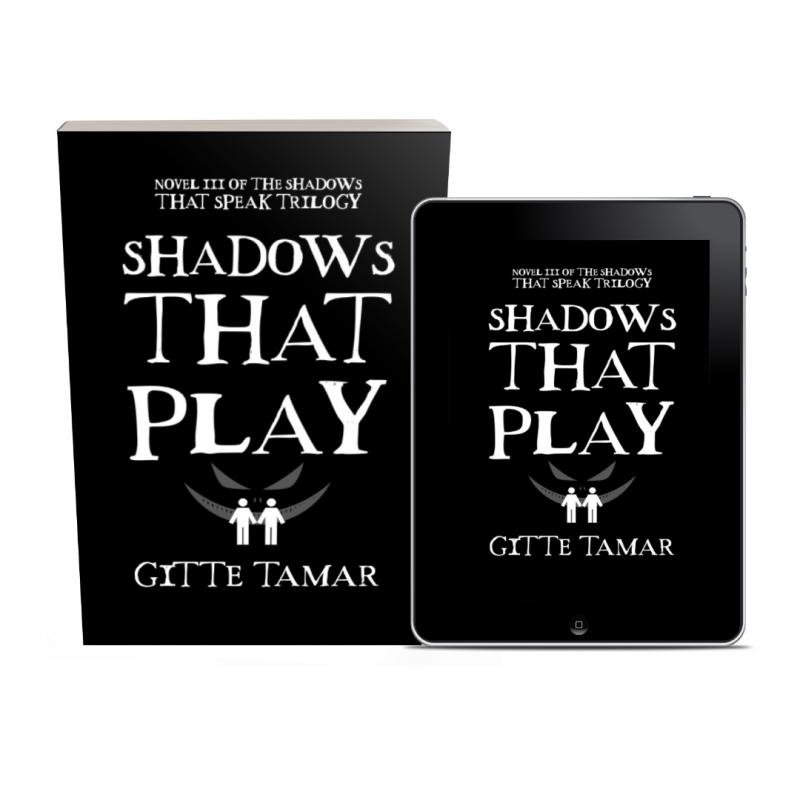 Author Gitte Tamar Releases Third Book In Her Shadows That Speak SeriesAuthor, Gitte Tamar is pleased to announce the release of her new horror novel, Shadows That Play. This is the highly anticpated third book in her Shadows That Speak Series. The other two books included: Shadows That Speak (Book One) and Shadows That Tempt (Book Two).Is the Shadow just a figment of his imagination, or is it a dark beast that possesses him, feeding on his unanswered prayers?Edgar Manley is a peculiar child who feels threatened by the world shifting around him. On one especially dreadful day, he receives news of his father's death and that guardianship will be passed to his estranged uncle. That night, while fast asleep, his mind becomes consumed by terrifying dreams inhabited by a voice warning him of an ominous narrative for both him and his twin sister Louise. The following day, upon arrival at his new home, the foreboding words come to fruition when the uncle disregards Louise as though she doesn't exist. Resentment fills his core as he grows convinced the new keeper has a hatred against her and prefers them both deceased.Left to delve alone in his speculations exacerbates his animosity, allowing the evil presence to infiltrate his innocence, fueling his vengeance. Is this familiar narrative coming to a finish, or is this just the beginning?The entire series is available for purchase on Amazon at https://www.amazon.com/dp/B09NKR3H1PWebsite: https://www.brigittetamar.com Instagram: https://www.instagram.com/brigittetamar Twitter: https://www.instagram.com/brigittetamar Facebook: https://www.facebook.com/brigittetamar Goodreads: https://www.goodreads.com/author/show/22065458.Gitte_Tamar Bookbub: https://www.bookbub.com/profile/gitte-tamarBrigitte, "Gitte," Tamar was born in a small rural Oregon town. Growing up, she was enthralled by scary tales featuring poetic tones and consistently gravitated towards writing darkened narratives. In the different storylines, Brigitte explores the harsh realities of social issues faced by today's generations. This includes the dark outcomes brought on by peer pressure, addiction, homelessness, mental illness, childhood trauma, and abuse. She feels it is essential to share narratives that refrain from sugarcoating the topics society tends to shy away from.

09-27-2022 | Arts & Culture
BookBuzz.net
Author Bruce Goldwell offering 20 Titles for only 99 cents each
Bruce Goldwell is having an Autumn book sale for 20 titles of his books. Included in this book sale are his Law of Attraction books, 3 Minutes Books, Fantasy books for young readers, and alternative health books. The Autumn season brings about a time of change for many people. Although Autumn book sales are usually one of the busiest times of the year for Bruce Goldwell, an independent author, this
09-15-2022 | Arts & Culture
BookBuzz.net
Suhaib Rumi Releases New Revised And Expanded Edition Of His Poetry Collection - …
Suhaib Rumi is pleased to announce the release of a new revised and expanded edition of his poetry collection entitled, Emerald Companion. A Transformational Book of Poetry, Prose, and Gems of Wisdom. Fragments written throughout the highs and lows of life are compiled together in their separate sections of Fall: the dark and lonely place we've all been through, that leads to Solitude: a place of self discovery, where in finding
09-14-2022 | Arts & Culture
BookBuzz.net
SMART Futures for a Flourishing World By Dr. Claire A. Nelson
Dr. Claire Nelson's book, SMART Futures for a Flourishing World offers us a 'magical mystery tour' that opens up new horizons, evokes both the sources of hope and despair, and inspires us to action to create a future of flourishing. We know we have to change but the question is HOW. Many of us feel powerless to solve the looming climate crisis, water crisis, food crisis, ocean pollution crisis and all
09-12-2022 | Arts & Culture
BookBuzz.net
September is Suicide Prevention Awareness Month, and this Young Adult Novel Tell …
September is Suicide Prevention Awareness Month, and this Young Adult Novel Tells a Gripping Tale of Ten Teens Motina Books Publishing is happy to announce the release Insanely Sane by Florida author, Jasmine Shouse. The book tells the alternating stories of ten teenagers who are being treated at Pleasant Valley Treatment Center for a variety of reasons. After a suicide attempt makes Tobias the newest resident, he's faced with the prospect of

11-20-2018 | Industry, Real Estate & Constr …
Ibbett Moseley
Building plot in shadow of Kent castle up for sale
Many people dream of living in a castle but the second best thing is living next door to one with access to the building and its extensive grounds. A unique and rare building plot has gone on the market that could allow the owner, subject to planning permission, to build a beautiful, comfortable home near to historic Grade II* listed Chiddingstone Castle in Kent. Dr Robert Wickham, Senior Partner at agents for
11-19-2018 | Arts & Culture
PR for THE LONG SHADOW
The Long Shadow by Pat Herbert is published
ISBN #978-1944156718 The Long Shadow by Pat Herbert is published The evil presence of Jack the Ripper crosses generations and casts its malevolent shadow over the lives of others About the Book: When Fiona and James Brett move into their fashionable London home, they discover the attic room harbours a dark and deadly secret. James locks himself away inside, ostensibly to take up oil painting, but he soon becomes moody, even violent. Local prostitutes
07-18-2018 | Business, Economy, Finances, B …
Research N Reports
Shadow Banking Market Increasing Investments and Exploration and Production Acti …
Research N Reports announces the addition of a new document on the global marketplace for Shadow Banking. The report profiles the leading players in the global market to be able to offer a clear view of the modest forces of the market, while the local and product segments of the worldwide marketplace also are studied in element a good way to offer a granular example of the market’s breakdown. The
10-16-2017 | Advertising, Media Consulting, …
Shadow Banking market forecasts from 2017 to 2022 scrutinized in new research
Shadow Banking market
The market study, World Shadow Banking Market Size, Status and Forecast 2022, has been compiled by industry experts and is based on a comprehensive analysis of the Shadow Banking market in the world. The geographical distribution and various segments of the Shadow Banking market are extensively studied in this report. For this report, the Shadow Banking market value is provided for 2016 in USD millions, an expected CAGR % as well
07-25-2017 | IT, New Media & Software
QyResearchReports
Shadow Banking Market Size, Status and Forecast 2021 & Applications
Qyresearchreports include new market research report United States, EU, Japan, China, India and Southeast Asia Shadow Banking Market Size, Status and Forecast 2021 to its huge collection of research reports. The global Shadow Banking market is shed light upon with an in-depth analysis of vital elements that could prove influential for growth and demand in the foreseeable future. With both primary and secondary analysis in sync, the analysts authoring this report
02-28-2017 | Business, Economy, Finances, B …
business news
3D motion tracking Market 2017 - Xsens, VICON, PTI Phoenix, shadow
A market study based on the "3D motion tracking Market" across the globe, recently added to the repository of Market Research, is titled ‘Global 3D motion tracking Market 2017’. The research report analyses the historical as well as present performance of the worldwide 3D motion tracking industry, and makes predictions on the future status of 3D motion tracking market on the basis of this analysis. Get Free Sample Copy of Report
Comments about openPR
Your portal is fast, simple, and easy to use. Others may have more functions but they also demand more editing time, you have to preformat the text in order to achieve a good result etc. I think openPR is really fantastic!
Andreas Knepper, wallmedien AG