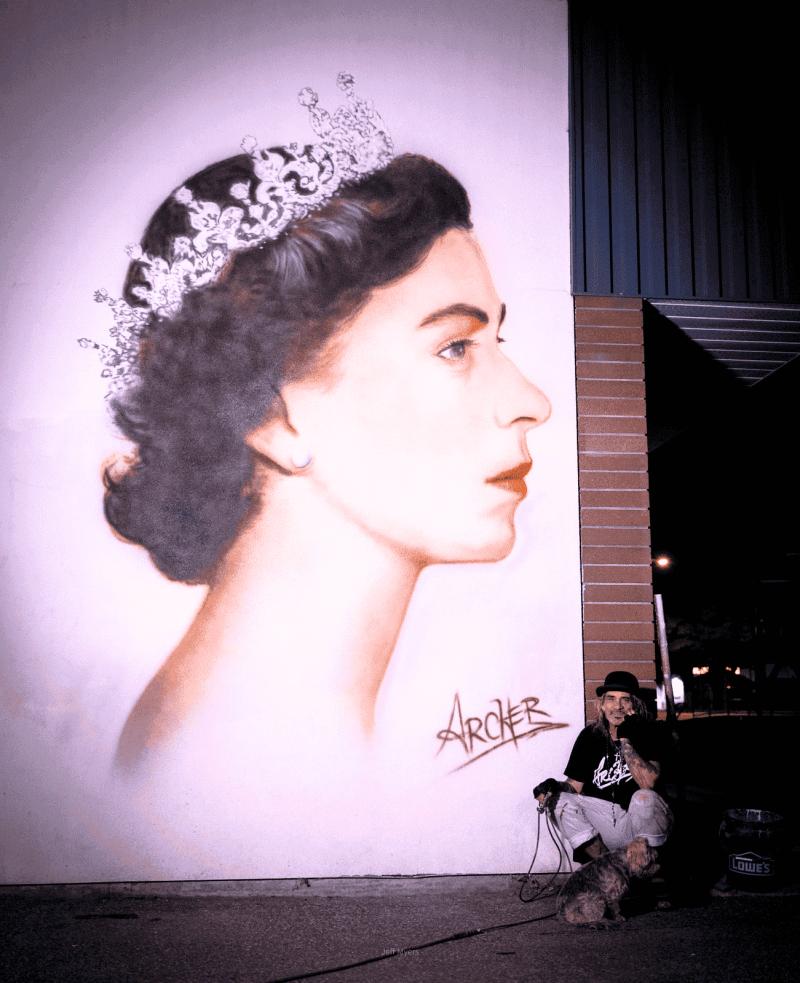 Known for his larger than life murals throughout Canada, the United States, and the Caribbean, renowned Canadian artist Paul Archer ('Archer') has painted a tribute mural for the late Queen Elizabeth, only hours after the announcement of the Queen's passing. The mural on the wall of the Grand Forks courthouse was completed the day of the Queen's passing (September 8, 2022), and is the first large-scale mural to commemorate the life of Queen Elizabeth.Archer, a traveling mural artist, has spent the last few years traveling around Western Canada, painting over 90 murals in the town of Grand Forks during this time - surpassing Chemainus for a town's murals - and achieving one of his bucket list goals of painting an entire town. The Victoria BC artist, born in England, has travelled worldwide creating art and spreading messages of hope and positivity - having painted over 17,000 murals during his life. This isn't the first time Archer has created a large-scale mural as a memorial tribute. In 2020, he honored the memory of the lone wolf Takaya by painting a mural of the wolf's home on Discovery Island just outside of Victoria. After the passing of Eddie Van Halen in 2020, Archer took to the wall of his own Victoria studio on Fort Street to paint the first mural to pay tribute to the late musician, working through multiple days and undesirable weather to achieve his goal. Since then, the iconic mural has been featured in Guitar World, BraveWords, Chek News, Blabbermouth and more. Throughout his career, Archer has painted such notable buildings as the Vancouver Aquarium, Vancouver Planetarium, BC Place, and the Vancouver Canucks dressing room. His art has brought him to meet with musicians such as Rob Zombie, Snoop Dogg, Alice Cooper, Ozzy Osbourne and more. These days, Archer travels with his beloved dog Lannah, and the two of them make their way throughout Western Canada, leaving messages of hope, peace, and optimism wherever they go - through the incredible works of art - such as Grand Forks' newest mural of Queen Elizabeth. Contact Archer: Email: archermurals@gmail.com Website: www.archerairbrushing.ca Facebook: https://www.facebook.com/ArcherTheArtist Instagram: https://www.instagram.com/archerairbrushingofficial/Company: Archer Airbrushing 847 Fort St Victoria BC V8W 1H6 Contact: Paul Archer Email: archermurals@gmail.comArcher, an airbrush extraordinaire has travelled the world making his mark overseas and now resides in Canada on Vancouver Island. His life-like works speak for themselves with a huge variety of subject matter. Archer can pretty much paint anything from tiny murals on gas tanks to 12 story buildings. Archer prides himself with his portraits of people and wildlife. If the eyes are indeed the window into your soul, then he is the artist to see that theory come to life. His attention to detail has built him a very successful career and for good reason why he has been commissioned by many famous people including celebrities and rock stars. His work is recognized from Canada to the Caribbean and is unmistakable "Archer". He is a master at capturing different moods and human emotions in the smallest detail. The skill of his airbrush is outstanding whether he is rendering the wrinkles of an elderly clown or the tears of a young child; he achieves a high level of contrast and beautiful levels of shading in his work.

03-20-2017 | Business, Economy, Finances, B …
Speed Queen
Speed Queen, a different concept of laundries
Speed Queen's history goes back more than a century: 100 years of experience, during which time this brand of washing machine has won Americans' unconditional trust. With the support of Alliance Laundry Systems, in 2014 Speed Queen launched its concept of international laundries: ultra-modern laundromats, designed to ensure optimal customer experience. In contrast to other players in the sector, Speed Queen manufactures its own machines and deals directly with investors,
09-20-2016 | Business, Economy, Finances, B …
MRRSE.com
Mattress Market - Queen-sized, Innerspring Mattresses Rule Consumer Choices
Sleep is a biological need that plays a vital role in maintaining metabolic homeostasis. Consumers are becoming aware of the importance of having good quality sleep as it helps in regulating metabolism, immune function, and influencing memory and other body functions. Owing to these reasons, demand for good quality sleeping mattresses has seen an increase in the past few years and is expected to grow at a considerable rate over
09-19-2016 | Business, Economy, Finances, B …
Speed Queen
SPEED QUEEN opens a new laundromat flagship store in Shanghai
GLOBAL laundry expert Speed Queen has recently opened a new flagship store on the third floor of Carrefour at Xu Jing in Shanghai. The Speed Queen Laundry Center is the 20th opened by the company since launching in China in 2014. The new store marks the beginning of a new stage of rapid expansion of Speed Queen in China. Speed Queen is dedicated to bringing globally popular self-service laundry to China
07-07-2016 | Politics, Law & Society
Bring Back The Smile To Nepal
Anna And The Queen
Anna and Sanu Gurung’s dream day at the Royal Garden Party on Tuesday, was made even better when the couple were singled out for a chat with Her Majesty The Queen. The pair, who founded Perthshire charity Bring Back The Smile To Nepal following last year’s earthquake, were invited to the Queen’s Garden Party at Holyrood Palace this week. The once in a lifetime experience, however, was elevated to dream status
04-06-2011 | Arts & Culture
Queen Gallery
Contact 2011: Figure and Ground @ Queen Gallery
This month, Queen Gallery will explore issues of war and censorship in Contact 2011: Figure and Ground. Here, four Iranian artists will explore their homeland and its social and political complexity with two shows: Landscape, Revolution, People and West by East. From April 30th to May 31st, Ali Kamran, Aydin Matlabi, and Gohar Dashti will present Landscape, Revolution, People. Here, they depict their feelings of their homeland and how
03-23-2011 | Arts & Culture
Queen Gallery
Norouz 2011 at Queen Gallery
Norouz, meaning “New Day” in Persian, is the traditional celebration of the Iranian New Year. Celebrated in Iran, this festival, which marks the first day of Spring, has now spread to other parts of the world. Here in Toronto, Queen Gallery is delighted to host our second annual exhibition marking this festival of jubilation. This year we have four Iranian artists involved in the show, all of whom are
Comments about openPR
I can't but agree to the positive statements about your portal: easy to use, clear layout, very good search function, and quick editing!
Jens O'Brien, Borgmeier Media Communication