Anna And The Queen


Press release from: Bring Back The Smile To Nepal 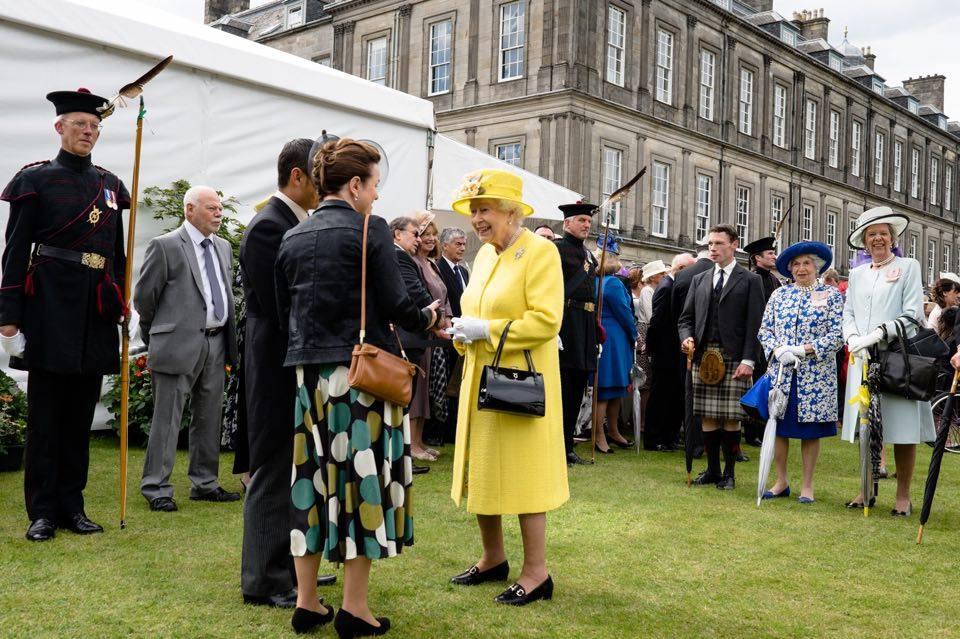 Anna and Sanu Gurung’s dream day at the Royal Garden Party on Tuesday, was made even better when the couple were singled out for a chat with Her Majesty The Queen.The pair, who founded Perthshire charity Bring Back The Smile To Nepal following last year’s earthquake, were invited to the Queen’s Garden Party at Holyrood Palace this week. The once in a lifetime experience, however, was elevated to dream status when the Queen’s Equerry plucked Anna and Sanu from the 8,000 guests for the chance to meet Her Majesty in person.“We were asked if we would like the opportunity to talk to Her Majesty”, explained Anna, “So we took our special place in the lines and waited. I was incredibly nervous!”The guests take their places in “lines” and the Royal Family then leave the Royal Tent to meet the attendees. Her Royal Highness, Prince Philip, The Earl of Wessex and the Princess Royal were all at the Garden Party this year, as part of the Queen’s 90th Birthday celebrations. Also at the prestigious event were Scottish First Minister Nicola Sturgeon and TV personality Philip Scofield.“When we spoke to Her Majesty”, Anna continued, “at first I thought I wouldn’t know what to say. She was lovely though. She seemed really interested in our charity and in Nepal. She asked all about the projects we’ve undertaken, how we raised money, our background and about Nepal. We found we had lots in common, as she affectionately told us about her time in the country, and we spoke about the difficulties in reaching some of the remote communities in the rural areas of Nepal. Her Royal Highness is obviously very proud of Prince Harry’s charity work in Nepal, as she told us enthusiastically about his time there.”It soon became apparent to the gathering photographers and journalists that Her Royal Highness, Anna and Sanu were engaged in an unusually long conversation, with the Queen clearly enjoying their time together.A photograph of the couple with the Queen was quickly issued to the media, by the Palace Press Office, and rapidly went viral. It showed Her Royal Highness looking lovely in vibrant lemon, chatting naturally and clearly enjoying the experience. “The picture has already spread around the world”, Anna added, “It has appeared on Newspaper and News websites in the UK, Nepal and all around the globe already. We were interviewed by the Palace Press Office and telephoned by journalists in Nepal. By the time we left, the photograph had already been shared thousands of times!”After the pleasant distraction of the Garden Party however, the work of the charity goes on. Anna is now heading to Nepal to continue the projects she started earlier this year.“We are currently rebuilding an entire village called Archanbas, in Gorkha Province. I will be overseeing the work, as well as planning our next project. I know though, that everyone in Nepal will be asking me about meeting Her Royal Highness!” More information on the charity’s work is available by visiting www.bringbackthesmiletonepal.org or via the charity’s facebook and twitter pages.Bring Back The Smile To Nepal is dedicated to helping the people of Nepal respond and recover from the Earthquake of 2015. The charity is actively assisting remote village communities in Nepal, who may otherwise never receive help, to rebuild their homes and their lives. The projects are personally overseen, supervised and carried out under the supervision of the charity’s onsite team of volunteers. Bring Back The Smile To Nepal is a UK based charity registered in Scotland. The charity was founded by Anna & Sanu Gurung of Perthshire in Scotland. We aim to give hope, help and homes to some of the poorest and most remote communities in Nepal.39 Duntaylor Avenue Aberfeldy Perthshire PH15 2BX

More Releases from Bring Back The Smile To Nepal

06-16-2016 | Politics, Law & Society
Bring Back The Smile To Nepal
Anna's Abseil Ropes In Thew Funds For Nepal
Anna Gurung, founder of the Perthshire charity Bring Back The Smile To Nepal, may still be celebrating an invitation to The Queen’s Royal Garden Party, but she still found time to undertake a fundraising 165ft abseil from the Forth Rail Bridge on Sunday. The abseil, from the iconic rail bridge in Edinburgh, saw Anna take the 165ft leap to the rocks below. “It was actually more terrifying than the parachute jump
05-20-2016 | Health & Medicine
Bring Back The Smile To Nepal
Nepal Charity Delivering On Its Pledge
Less than three weeks after promising to rebuild an entire village in Nepal, Perthshire Charity Bring Back The Smile To Nepal’s ambitious project is well under way. The charity’s founder, Anna Gurung, visited the remote village of Archanbas during her recent visit to Nepal. “Archanbas”, Anna explained, “is an extremely remote village in Northern Central Nepal. It sits on the top of a steep hill and is very difficult to reach.

03-20-2017 | Business, Economy, Finances, B …
Speed Queen
Speed Queen, a different concept of laundries
Speed Queen's history goes back more than a century: 100 years of experience, during which time this brand of washing machine has won Americans' unconditional trust. With the support of Alliance Laundry Systems, in 2014 Speed Queen launched its concept of international laundries: ultra-modern laundromats, designed to ensure optimal customer experience. In contrast to other players in the sector, Speed Queen manufactures its own machines and deals directly with investors,
10-14-2016 | Fashion, Lifestyle, Trends
TMR
Global Mattress Market - Queen-sized, Innerspring Mattresses Rule Consumer Choic …
Changing lifestyles have transformed various optional commodities into necessities. One such thing is a mattress. Mattress come in a wide range of product varieties based on styles, sizes, and a range of firmness. Post-recession economic stability across developed countries and rising disposable incomes in developing countries are positively influencing the market. An affluent consumer is willing to pay more for premium mattresses that assure greater comfort and excellent sound sleep.
04-06-2011 | Arts & Culture
Queen Gallery
Contact 2011: Figure and Ground @ Queen Gallery
This month, Queen Gallery will explore issues of war and censorship in Contact 2011: Figure and Ground. Here, four Iranian artists will explore their homeland and its social and political complexity with two shows: Landscape, Revolution, People and West by East. From April 30th to May 31st, Ali Kamran, Aydin Matlabi, and Gohar Dashti will present Landscape, Revolution, People. Here, they depict their feelings of their homeland and how
03-23-2011 | Arts & Culture
Queen Gallery
Norouz 2011 at Queen Gallery
Norouz, meaning “New Day” in Persian, is the traditional celebration of the Iranian New Year. Celebrated in Iran, this festival, which marks the first day of Spring, has now spread to other parts of the world. Here in Toronto, Queen Gallery is delighted to host our second annual exhibition marking this festival of jubilation. This year we have four Iranian artists involved in the show, all of whom are
02-02-2011 | Arts & Culture
Queen Gallery
Family Fun Art Fair at Queen Gallery
Queen Gallery is celebrating Family Day with our talented artist-family! Family Day is on February 21st this year and so from February 4th to 26th, 2011, we are celebrating the holiday by having a Family Fun Art Fair and we are inviting you to come and celebrate the exhibition with us! We opened our doors over a year ago and have been delighted to showcase the vibrant and diverse talent that
10-29-2010 | Arts & Culture
Queen Gallery
Hugo E. Slepoy’s ‘Originals’ at Queen Gallery
IMMEDIATE RELEASE Hugo E. Slepoy’s ‘Originals’ at Queen Gallery October 27, 2010 Toronto Queen Gallery proudly presents Hugo E. Slepoy’s solo exhibition entitled ‘Originals’. Twenty-five of Hugo’s highly-detailed, original drawings will be on exhibit from Thursday, October 28, 2010 until Tuesday, November 9, 2010. Everyone is invited to attend the opening reception which will be Thursday, October 29, 2010 from 6-9 pm. Hugo E. Slepoy graduated from the University of Buenos Aires, in
Comments about openPR
9 o'clock: discuss press release with client, 10 o'clock: submit release to openPR, within the briefest possible time release is published and displayed in a prominent place on openPR.de. I am thrilled!
Zehra Spindler, Calypso Now! - Communication Agency