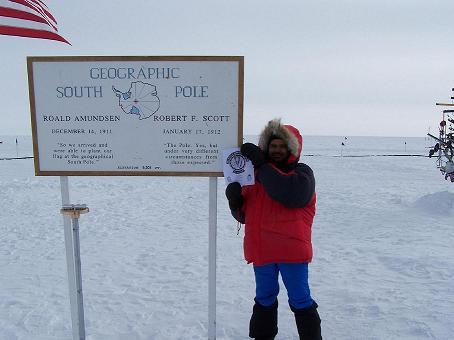 Proud to be a BITSian - Raj Kumar Indian Navy

For this dare devil who is a rare combo of being a submariner, mountaineer and sky diver, every day is anew dawn, a new adventure, a new challenge and a new moment that was never before.Some of the greatest stories of modern exploration are those of attempts to reach the South Pole. It is an incredible journey that few have had the privilege to experience. Imagine making your mark on history as you travel by ski the last 60 nautical miles, to reach the most southerly point on earth - the Geographic South Pole where the ice is almost 3000m thick and feel beneath your feet 360 lines of longitude meeting.From India, the journey to Antarctica followed the extremely long route via Paris, New York, Lima, Santiago and Punta Arenas. With spirits soaring and hopes buoying high, he boarded the IL 76 Russian aircraft from Punta Arenas on 12 December 2006. The four and half hour long flight went without a shudder and landed on the blue ice runway at the Patriot Hill base camp in Antarctica (80 deg South Latitude, Temperature minus 12 Degrees). Next four days became inactive inside the tent due to the infamous Antarctic weather.The next move was in a tiny twin otter aircraft on 16 December 2006 to 88 deg South around the 086 W meridian, from where the mission to ski the last two degrees -about 250 km. begins. After several attempts the aircraft managed to land on an extremely uneven ice surface amidst huge sastrugis. A 40 knot wind howled with the temp hovering around minus 30 deg C. The air was riddled with fine snow dust. The plan was to ski 8 hr each day in periods of 1 hr at one go with 10 min breaks in between each hour. To meet the deadline one had to average around 25 km every day and this did not cater for any loss of days due to bad weather, injuries or accidents. Day after day, with nothing else in sight, and often with frost frozen ski goggles, through which one could barely see, he pulled the heavy sled uphill, following the needle of the compass and the shadow of the sun, heading due south. The ice played tricks with his eyes and he saw strange phenomenon all around. Perihelion, the round circle with four bright spots around the sun, was an amazing sight. No signs of any life anywhere, it seemed as if one was on a different planet altogether. This primitive continent has remained unchanged for millions of years and still holds unimaginable number of mysteries that man has only begun to unravel now. The sun always remained above the horizon, relentless, harsh, unforgiving and surprisingly cold. At exactly 0200 hrs on 28 Dec 2006, he along with his Indian Naval Team Members proudly unfurled the Indian national flag at the South Pole and sang the national anthem. The pole station follows New Zealand time hence it was around 10 am local time. He now is part of the exclusive club of those who have skied to the South Pole that has less than 300 members.This dare devil with never say die attitude is none other than Proud to be a BITSian, Raj Kumar from the Indian Navy who completed the off campus work integrated learning programme BS Engineering Technology in June 2005 from Birla Institute of Technology and Science 'BITS" Pilani Rajasthan India.Dr BR Natarajan Professor & Dean Birla Institute of Technology and Science Pilani (Rajasthan) 333031 India Phone 91-1596-242210 Fax 91-1596-244183 brnt@bits-pilani.ac.in www.bits-pilani.ac.inBirla Institute of Technology and Science (BITS), Pilani Rajasthan which has set a bench mark in industry university collaboration is one among the top ranking universitiesin India today offering degrees in various branches of Engineering, Management, Economics, Pharmacy, Sciences, Engineering Technology, Information Systems, Finance, etc presently at Pilani, Dubai, Goa campuses and in the near future at Hyderabad campus apart from an array of work integrated learning programmes for HRD of a vast spectrum of Indian corporates.