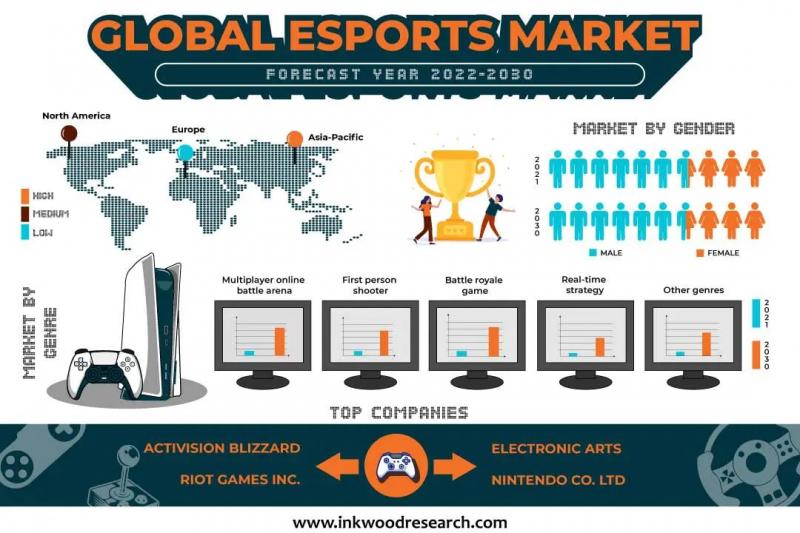 Inkwood Research predicts that the Global Esports Market is evaluated to register a CAGR of 22.18% during the forecasted period of 2022-2030."Browse 67 Market Data Tables and 55 Figures spread over 243 Pages, along with an in-depth TOC on the Global Esports Market Forecast 2022-2030."ESports entails organized and competitive video gaming, with competitors from various teams or leagues facing each other in the same games. Their huge popularity facilitates lucrative corporate sponsorships. REQUEST FREE SAMPLE LINK - https://inkwoodresearch.com/reports/esports-market/Live Streaming of Esports Events propel Market DemandsLive streaming is the act of filming and broadcasting content at once to a live audience through social media. With regard to eSports, users can participate as consumers or content makers on live-streaming services like YouTube and Twitch. The content providers or streamers record themselves live while interacting with views through video. The audience connects with the streamer through text chat. However, there is minimal to no interaction during tournaments. Further, the live streaming audience has surged between 2019 and 2021. There has been consistent growth in the gaming sector in terms of gaming, which is estimated to accelerate during the forecast period. Also, this is attributed to the eSports broadcasting growth give the pandemic impact. For instance, Facebook Gaming, YouTube Gaming, and Twitch witnessed increased viewership in 2020. Real-Time Strategy: Fastest Growing Genre RTS or real-time strategy is a strategy video game genre wherein players form combat units, construct bases, and seek to destroy opposing AI units or opposing players. It differs from other grand strategy games, with actions taking place in real time. It is devoid of the traditional tactical pauses or combat for calculating the next move. Read Our Blog: https://inkwoodresearch.com/global-esports-market-trendsEurope: Fastest-Growing Region Esports is the leading industry in Europe with regard to viewership and revenue. The most popular gaming brands here include FIFA, Call of Duty, and League of Legends. The rising involvement of big brands and their investments contribute majorly to the industry's growth in Europe.Also, there has been a considerable increase in the number of eSports tournaments in the UK, Sweden, Finland, and Germany. In addition, eSports videos and tournaments have become more popular given the increasing live streaming platforms. Besides, there has been growing awareness about eSports since 2015. The stakeholders in the market are prioritizing value integration and audience. The talks about eSports' inclusion in the 2024 Paris Olympics are evaluated to further influence competitive rivalry in the market. Some of the leading firms in the market include Activision Blizzard, Riot Games Inc, Electronic Arts, Take-Two Interactive, Valve Corporation, etc.Request for Customization: https://inkwoodresearch.com/request-for-custom-report/Related Reports: GLOBAL GAMING MARKETInkwood Research 169, Harrison Avenue Boston, MA 02111 Tel: 1-(857)293-0150 Email: sales@inkwoodresearch.com Website: www.inkwoodresearch.comInkwood Research specializes in syndicated & customized research reports and consulting services. Market intelligence studies with relevant fact-based research are customized across industry verticals such as technology, automotive, chemicals, materials, healthcare, and energy, with an objective comprehension that acknowledges the business environments. Our geographical analysis comprises North & South America, CEE, CIS, Middle East, Europe, Asia, and Africa.