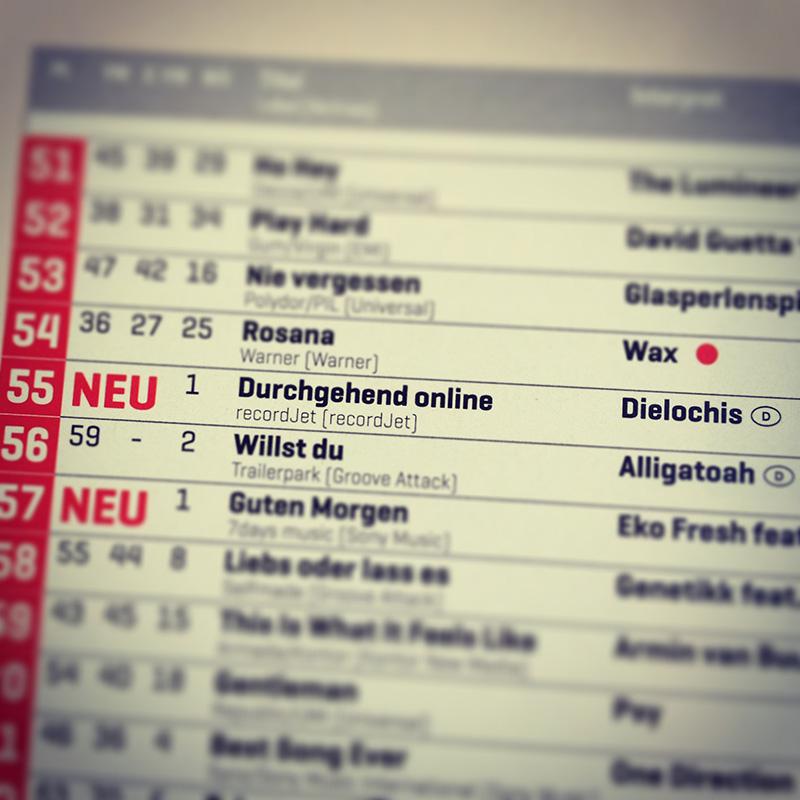 - Entered the German Singles Charts at number 55 - YouTube as a stepping stone for musical successJust one week after their passengers "Milky Chance" entered the German Singles Charts at number 98 (now up to number 92), the Berlin-based digital distributor recordJet is announcing another musical success: Their passengers Heiko and Roman Lochmann, better known as "DieLochis", have entered the German Charts at number 55 with their single "Durchgehend Online" (Continuously Online).What's special about this is that the twins Heiko and Roman, aka "DieLochis", are only 14 years old. They owe their musical success to their popular, well-maintained YouTube Channel. The two high school students from Hessen are managed by their mother Anja."DieLochis are a prime example of how YouTube makes sense as a musical stepping stone, because, according to studies, the younger generation uses YouTube to discover new music", says Jorin Zschiesche, recordJet captain, on Heiko and Roman's sensational chart success. "The fact that it's our youngsters that shot to the top so quickly is a delightful surprise. We can't wait to see what the two boys achieve in the coming months".DieLochis are the young, Berlin-based music distributor’s highest chart entry so far. Passengers Milky Chance, Baba Saad and Room77 have achieved chart positions in the past.About recordJet: recordJet is a digital music distributor and content aggregator based in Berlin, helping musicians and labels to sell their music online worldwide. Music uploaded on www.recordjet.com will be distributed to mp3 stores and streaming services like iTunes and Spotify, where the music is then available for sale or for streaming. Unlike other content aggregators, recordJet pays out 100% of the royalties to the musicians which also keep all of their rights, for a small annual fee. Many additional service offerings like physical distribution into 500 shops, CD pressing and professional promotion make recordJet an allround service. recordJet was founded in 2008 with the goal to provide the European music market, especially unknown artists and small labels, with an attractive and affordable way of music distribution. recordJet went online in 2010 and has since then expanded its services continuously. In April 2013 the company went international with the launch of its highly anticipated English website.recordJetInh. Jorin Zschiesche Schillerstr. 4-5 10625 Berlin Germany Tel.: +49 (0)30 65005199 Fax.: +49 (0)30 67951070E-Mail: recordjet@recordjet.com Internet: www.recordjet.com

04-28-2020 | Business, Economy, Finances, B …
Your German Mortgage
Find the best conditions for your German mortgage with Your German Mortgage
During times of the Coronavirus, we are here to help you with finding the right financing for your property. Special times call for special measures, that's why it's now more important to find a trustworthy and experienced mortgage broker than ever. We got you covered from finding your property of dreams all the way to financing it. To ensure that, we have experts in almost every German major city,
11-16-2018 | Politics, Law & Society
i.b.s. International Operative Services e.K.
German Maritime Security 2018, German Government Statement!
Despite all international and national efforts, piracy remains a serious peril for the international shipping industry. Especially in Asia (i.e. Chittagong/Bangladesh or on the Strait of Malacca), but also in South America (e.g. Bay of Santos/Brazil or in the port of Callao/Peru) robbery or piracy there has recurred in the recent past. At the West African coast the number of incidents had raised even by 50% with 66 incidents this
07-26-2017 | Business, Economy, Finances, B …
Teck Language Solutions Inc.
More German Investments Mean More German Translations
Why Language Continues to be an Obstacle for Investing in Germany Germany is one of the prime markets for foreign investments, with an estimated 4% of global direct investment making its way into the country. In fact, the world’s second richest man, Warren Buffett, who is only beaten to the top spot on the financial leaderboard by Microsoft Founder Bill Gates, believes Germany to be a ‘great market’, and confirms the
08-18-2015 | Industry, Real Estate & Constr …
IKA®-Werke GmbH & Co. KG
German Design Award 2015
German Design Council Awards a Special Mention to the LR 1000 Laboratory Reactor and Nominates the Tube Mill Staufen, Germany, February 23, 2015 — For the second time, a device produced by IKA® Werke has received the "Special mention for exceptional design quality" award from the German Design Council. The company was presented with the award in the "Excellent Product Design — Industry" category as part of the German Design Award 2015
12-24-2011 | Politics, Law & Society
bunk-alliance Rechtsanwälte
German Local Trade Tax
All the companies in Germany are liable to pay not only corporate income tax, whose rate is nowadays about 15% of the annual profit of the company, but also trade tax (Gewerbesteuer), which is a tax of German characteristics. Why would we say that trade tax is of German characteristics? Because it is different from the corporate income tax, which is charged by the German Federal Government and it is difficult
05-20-2008 | Leisure, Entertainment, Miscel …
SkatMedia
ISPA – German Masters 2008
Magdeburg – Over the long weekend of the 4. Mai more than 1.000 Skat players filled the Mittelland hall in Barleben. The tournaments of the 30. German Mastery and the 27. open International German Single Mastership were held by the International Skat Players Association, ISPA Germany. Patrons of the Games were the 1st Barleber Skat sports club e.V. and the Skat club \"Burger Ihleskater\", whose good organization together with the
Comments about openPR
OpenPR is clearly structured and remains true to its principle of confining itself to the essential parts. OpenPR has proven to be a very good and reliable partner to our media agency: Within the shortest time the releases are online and go down well with the media representatives. The success of OpenPR is reflected in the steadily increasing number of press releases. It is good that OpenPR exists!
Ursula Koslik, Director Marketing & PR, F+W Hamburg