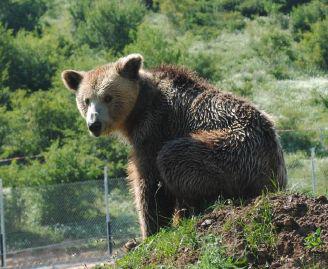 Restaurant bear in the sanctuary Prishtina

The law firm Franke & Partners (franke-ip.com) negotiated a contract between the international charity organization “Four Paws”, the Kosovar Minister of the Environment and the City of Pristina, providing Four Paws with exclusive rights to maintain brown bear enclosures in Kosovo. Four Paws has built an enclosure for keeping 13 brown bears on an area of about 16 acres of forest land, which was leased from the city of Pristina and is located about 20 kilometers from the city center. For the coming year, Four Paws also intends to build a new training center next to the enclosure, which can help improving the public awareness of environmental issues in Kosovo. Dr. Bernd Franke, partner of Franke & Partner and head of the team of attorneys which negotiated the contract, said: "The particular difficulty of the project was to bring together the right people of the administrative bodies in Kosovo, the animal rights organization, the international NATO KFOR force, the EU mission EULEX and the local police in Prishtina. It was essential that the rescue operation was implemented rapidly and in a coordinated manner.” Many owners initially resisted violently against the expropriation of their bears. The operation was getting even more tragic when one owner in Mitrovica killed two of his privately kept bears. Since autumn 2010, the private keeping of bears in Kosovo is prohibited by law. The animals, which have often been snatched at a young age from their parents in the wild, had mostly been kept in small cages in restaurants, serving the commercial purpose to attract visitors for the restaurant business. A professional handling and welfare of the “restaurant” bears was not possible. The entire project is strongly supported by the Kosovar Minister of the Environment, Dr. Dardan Gashi, and by the Austrian ambassador in Kosovo, Dr. Johann Brieger and his wife Roswitha. "We are proud to have laid the legal basis for this project, which will provide the remaining restaurant bears with a new home and will de facto abolish the private bear-keeping in Kosovo", said Dr. Dirk Franke, managing partner of the firm Franke & Partner.Franke & Partner Intellectual Property Law Firm is a law firm in Munich specialized in intellectual property law, international contract law and tax law.Franke & Partner Intellectual Property Law Firm Widenmayerstr. 25 80538 Munich GermanyPhone: +49 89 5404 2233 Fax: +49 89 5404 2234 Email: info@franke-ip.com Web: www.franke-ip.com

07-02-2018 | Business, Economy, Finances, B …
busines news
International Business Opportunities with IKCOC
"Indo-Kosovo chamber of commerce is an association organization building business community and network to support business owners to explore trending Business Opportunities. Chamber foundation is strongly natured by the president of the chamber to meet international global trade and industry. Business bureau are welcomed for the purpose of economic development for trending business opportunities and funding startups and booming industry in collaboration with Indo-Kosovo chamber of commerce". The Indo-Kosovo Chamber
11-29-2016 | IT, New Media & Software
imbus AG
A leading role in test know-how world-wide: imbus announces Global Partner Statu …
Brussels, 29 November 2016 – imbus and ISTQB® are pleased to announce that imbus has achieved Global Partner Status with ISTQB®, International Software Testing Qualifications Board. The ISTQB® Global Partner status demonstrates imbus’ commitment to the field of software testing and the company’s willingness to contribute to the promotion of the testing profession all over the world, by means of certifying its employees in accordance to the “ISTQB® Certified Tester” career
07-05-2016 | IT, New Media & Software
imbus AG
Kickoff for imbus Peja
Peja, 4 July 2016 – Europe grows even closer together at imbus: The leading solution provider for software quality assurance and testing – whose headquarters are located in Moehrendorf, Germany – celebrates the opening of a new near-shore site in Peja (Kosovo) today. “imbus Peja L.L.C. supports imbus Germany in the field of software development and testing”, explains the managing director of the new imbus site Flurim Kelmendi. The experienced testing
04-05-2011 | Industry, Real Estate & Constr …
Songwon
Songwon continues to extend local customer support in Spain, Serbia, Montenegro, …
Ulsan, Korea – April 4, 2011 – In line with the recognized leadership position of Songwon in the delivery of additives to the plastics industry, it has appointed Biesterfeld Spezialchemie GmbH as its partner to provide local customer support services in Spain, Serbia, Montenegro, Kosovo, Slovenia, Macedonia and Croatia. Biesterfeld Spezialchemie GmbH, a leading pan-European distributor of performance products in the chemical and technical materials markets, will be active on
11-15-2010 | Media & Telecommunications
Agregator Ltd.
SmsCoin reaches new heights – 87 countries connected
In the beginning of September SmsCoin announced expansion of its coverage by connecting 81 countries. During last two months SmsCoin made some more steps towards its main goal – having 100 countries connected by January 2011. Currently, more countries are covered by SmsCoin including Kosovo, Algeria, Sudan, Marocco and Indonesia. Thus, SmsCoin gives to its partners the opportunity to accept SMS payments from mobile carriers' subscribers of 87 countries around the
11-12-2010 | Industry, Real Estate & Constr …
Fisher Capital Management Road Equipment On Lease
Fisher Capital Updates - Bechtel-Enka Completes Albanian Motorway
Fisher Capital Equipment Management News Updates - TIRANA, ALBANIA - Bechtel and joint-venture partner Enka today completed construction on the Albanian Motorway, a 37-mile (61-km), four-lane highway that stretches from central Albania to the to Kosovo border. The motorway is now open to traffic. Construction Project Management and Civil Engineering Careers scams. Keep posted and don’t be a victim. The end of construction was marked by a ceremony to
Comments about openPR
OpenPR ist the nicest and most clearly laid out PR platform I have seen to this day. The press releases are displayed very nicely and clearly and without any unnecessary frills. The updates are fast and the finished release looks appealing and is clearly legible. Even with 16 years of experience one discovers new things from time to time. Congratulations!
Gabriele Ketterl, Director Marketing & PR, Menads