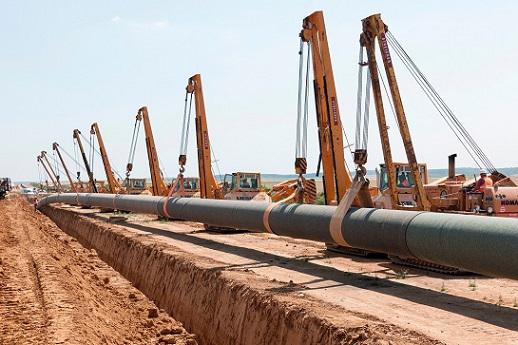 New side boom cranes place the pipeline into the trenches.

MAX STREICHER GmbH & Co. KG aA is laying 51.7 kilometres of pipeline on behalf of GRTgazDeggendorf, August 2013 – GRTgaz is currently extending France’s gas transmission network with the Haute de France II (HDF II) pipeline project. MAX STREICHER GmbH & Co. KG aA has been commissioned by GRTgaz to complete the second construction lot. STREICHER is laying 51.7 kilometres of DN 1200 gas pipeline between Corbie and Cuvilly in the Picardy region near Amiens. Working in the “bread basket” of France presents new challenges to pipeline construction experts and calls for new laying techniques. GRTgaz is building Haute de France II as a parallel pipeline to the existing Haute de France I. HDF II starts in French Dunkirk, near the Belgian border, and runs south. The soil in the generally flat area STREICHER is working in is loose and stony. The pipeline has to cross many other lines in the area. A total length of 370 metres is being laid using microtunelling drilling techniques. Countless streets and existing lines have to be crossed using closed methods of laying. The Luce and Avre rivers will be crossed using open laying techniques. In the area around the Somme river a new trenchless construction method is to be used. The 1120 metre stretch will be crossed using the direct pipe method. Direct pipe is a combination of two established laying techniques, horizontal directional drilling (HDD) and microtunelling. Pipeline construction and agriculture going hand in handThe particularly ecological requirements for completing this work affect the whole construction process. The area that Haute de France II runs through is known as the bread basket of France. The focus of the process is to protect arable land and ensure sustainable soil quality. Therefore in bad weather and at a certain level of soil moisture construction work is halted so that the soil is not negatively affected. To ensure that the work is as efficient as possible, whenever possible the construction methods are decided on in agreement with the Chambre d’Agriculture (Chamber of Agriculture). CRC double welding powerWork on the Haute de France II project is carried out using the CRC-EVANS welding method. This involves welding the root of the seam from the inside with four torches simultaneously. Automatic welding machines with double burner systems are used for the filler layers as they allow welding from two places at a distance of ten centimetres simultaneously. This allows for higher deposition rates than with other methods. The production rate is also significantly higher. The current top performance rate in STREICHER’S work is more than 40 welding seams per day. In total at the second construction site, approximately 3200 seams will be welded and three valve stations and one receiving station will be completed. Since March approximately 230 STREICHER employees have been working north of Paris on site on the project. The first pressure tests should take place in October and the gas pipeline is due to be ready for use in March 2014.With a tradition of more than 100 years, the STREICHER Group combines quality and expertise with many years of experience in the business sectors pipeline and plant construction, mechanical engineering, civil and structural engineering as well as raw and construction material. The parent company MAX STREICHER GmbH & Co. KG aA headquartered in Deggendorf (Germany) employs approximately 3,000 specialists at home and abroad.MAX STREICHER GmbH & Co. Kommanditgesellschaft auf Aktien Tanja Schmidt, Leitung Marketing Schwaigerbreite 17 94469 Deggendorf Tel. +49(0)991 330-213 Fax +49(0)991 330-297 tanja.schmidt@streicher.de www.streicher.deHeadlineAffairs Rumfordstraße 5 80469 München Tel. +49(0)89 23 23 90 93 Fax +49(0)89 23 23 90 99 spitzl-kirch@headline-affairs.de www.headlineaffairs.com

06-05-2017 | Health & Medicine
ReportsWorldwide
Cigarettes in France, 2016
ReportsWorldwide has announced the addition of a new report title Cigarettes in France, 2016 to its growing collection of premium market research reports. "Cigarettes in France, 2016" is an analytical report by GlobalData that provides extensive and highly detailed current and future market trends in the French market. The report offers Market size and structure of the overall and per capita consumption based upon a unique combination of industry research, fieldwork,
12-07-2016 | Industry, Real Estate & Constr …
ReportBazzar
Packaged Food in France
Summary The slow but progressive exit from the persisting crisis of the French economy and the slight improvement in GDP growth in 2016 has contributed to current value growth of 1% in current value terms in packaged food. This is still modest and just in line with the CAGR seen over the review period, although this is in the context of strong price wars, stagflation and the detrimental effects of terrorist
10-01-2014 | Energy & Environment
WELTEC BIOPOWER GmbH
Biomethane for France
WELTEC Receives Order for Biogas Project with Gas Processing French agriculture has a wealth of raw and waste materials that are suitable for biogas plants. However, only half of the available materials are presently used for energy production. Thus, ambitious development plans have been drawn up: By 2020, the biomass share in the field of renewable energies in France is to rise to about 50 percent. No wonder that that the number
09-11-2012 | IT, New Media & Software
celum GmbH
celumday 2012 France
On October 4th 2012 the celumday France will take place at the Hippodrome d’Auteuil in Paris. The Tribune Présidentielle is the perfect meeting environment for customers, partners and interested parties to exchange ideas and discuss current developments as well as trends in managing brands and digital assets. At the celumday 2012 France you will experience that sportive competition and today’s business world have a lot in common: both strive to be
04-04-2008 | Sports
Speed:World:Cup
Speed:World:Cup France: Day 3
What an incredible day: 60 knots of wind, amazing speeds, upside-down timing caravan. We have rarely seen such a windy race day during competition - an experience that not many can share. Alexandre Caizergues and Charlotte Consorti, both from France, are still dominating the PKRA Speed:World:Cup in Port St. Louis. The day started calm, not very windy, and the skippersmeeting was scheduled for 9:30, due to the official function yesterday evening.
04-03-2008 | Sports
Speed:World:Cup
Speed:World:Cup France: Day 2
Epic conditions today in Port St. Louis, with three legs held in 30-40 knots of wind the race committee tested all skills of the riders, technical as well as physical. Alex Caizergues was the man of the day, with three bullets clearly in the lead now. In the womens fleet, Charlotte Consorti has also a perfect score with 4 out of 5 victories. Skippersmeeting was held at 9:00 and
Comments about openPR
9 o'clock: discuss press release with client, 10 o'clock: submit release to openPR, within the briefest possible time release is published and displayed in a prominent place on openPR.de. I am thrilled!
Zehra Spindler, Calypso Now! - Communication Agency